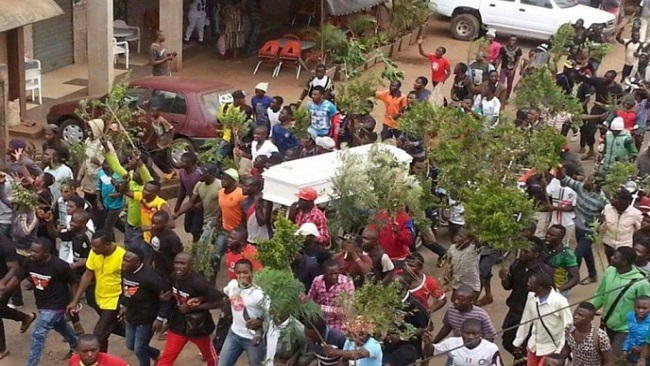 From the beginning, the situation was at the disadvantage of English-speaking Cameroonians. They were not considered a group, they were reduced to the language they shared. English. They were designated Anglophones. And because of their reclamations, they were considered a problem. Those across the Mungo who speak English are a problem.

Decades went by and generations succeeded to generations. When the crisis became very serious and people really started looking that way, the first thing they heard was “It all comes from the Anglophone problem.” Especially young French-speaking Cameroonians who did not know anything about the dark past of the country. All they got was “According to Anglophones, English is treated differently though a national language.”

Truth is last year it all started with a language problem, what worsened the confusion. Teachers were among others asking for “good English” to remain the norm in the “Anglophone school system”, and lawyers were among others asking for English to be the first language in Common Law courts. So it was really about language to some extent. Except that things became different when the people across the Mungo raised. At that point it was not about language anymore, it was about being fed up for several years and finally saying it out loud. But since the designation remained the same, The Anglophone Problem, the outburst was (knowingly or unknowingly) downplayed and considered a language problem.

Armed with a fostered ignorance, young French-speaking Cameroonians are all about “I speak English so I am an Anglophone too. We are all brothers, there is no difference between us” or “I was born in Buea/Bamenda, it is my country there too, so we are brothers!”. I considered it an insult from day one, but how to make people understand the situation is not what they think it is when the designation of the whole thing means exactly what they think? Tangled, isn’t it.

I consider it an insult because saying “I speak English so I am just like you” means “I don’t even plan to understand your situation since… there is no situation”. On the other hand, how to get mad at people who really mean well but are legitimately acting wrong because all they heard from day one validates their point.

For about 50 years, the designation “Anglophone Problem” is fulfilling its mission in a spectacular way. People should not know what happened in the past or what is currently happening. Why bother doing any research when the coined expression clearly conveys the message it has been created for? Anglophones are a problem. And now they went to the next level: they are having a crisis, just like a child who is upset.

What I was expecting in November 2016 was for every region of the country to rise and ask for an effective decentralization for them to be able to administrate themselves and be masters of their own growth in every way. I was so disappointed when I realized my expectations would never come to reality. When I think about it today, I ask myself if they even realized they were missing an opportunity since it has never been presented as such: Anglophones were being a problem, a disturbance, and what they had to do was to make them calm down for everything to go back to normal. Though our normal is depressing. But who cares? For now what we have to do is to talk some sense into those who are having a crisis.

When someone expresses a deep suffering and the reaction of their entourage is “This is nothing, you are just imagining things. I am going through the same stuff and I am ok, so you have to be ok too”, it is normal for the person to feel disrespected or insulted.

Do not get me wrong. I am not condoning violence or illegal acts in the name of “the crisis”. I am only a citizen trying to understand the whole situation from different perspectives. The misnomer “The Anglophone Crisis/Problem” plays a great part in our recent story of violence since it guided the reactions of the majority.

A whole year has passed and we are still at square zero. People still don’t get it. Those from across the Mungo are still reduced to English and the people they found themselves fighting against claim they are speaking the same language so everything should be all right.

Let’s hope my two cents will help some see things differently and change their perception, but most of all their reaction towards the people from across the Mungo. My father used to tell me that to fix something you have to first of all acknowledge it needs to be fixed.