Home » Governance » Diary of a Student Leader: Mugabe is Dead but Mugabeism is Alive

Diary of a Student Leader: Mugabe is Dead but Mugabeism is Alive 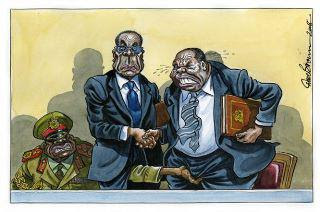 It was a hot October night in 2009 and my fellow student leaders and I were taking public transport home after celebrating the birthday of a colleague’s son. In our minds, the trip was to cap what had been a joyful day. None of us knew that events would take an unexpected turn and we would end up in a cold jail cell.

After we had boarded a commuter bus at Market Square, one of the busiest terminals in Zimbabwe’s capital, Harare, en-route to our lower-class suburb of Glen View, we joined our fellow passengers in a conversation about the various social, political and economic issues of the day. In a Zimbabwe where the space for human rights was limited, people often shied away from engaging in public discussions of politics and the government’s failures. The conversation was quite emotional and animated. Passengers passionately and openly expressed their disgruntlement with the continued deterioration of the economy and the subsequent ruthless clampdown on any form of dissent.

Robert Mugabe, still the president at the time was refusing to concede to an inclusive government arrangement following his loss in the 2008 presidential election, and his subsequent refusal to handover power to Morgan Tsvangirai, the opposition leader and the winner in the election who later died of cancer in 2018. One of my colleagues loudly spoke of how Mugabe was the reason for Zimbabwe’s political crisis as he continued to undermine the parties to the conclusive government.

Some of our fellow passengers shouted that the mere mention of Mugabe could get everyone in the bus in trouble. Proving those words, the driver suddenly made a U-turn and drove straight to the Harare Central Police Station.

Upon our arrival at the station, infamous for being the hub of arbitrary detentions, four armed police officers who had been briefed about what had transpired wasted no time in handcuffing us and declaring that we had committed ‘treason.’  For good two hours, we went through interrogations and severe beatings before we were finally detained in the filthy cells.

Some of my colleagues were bleeding, but they were denied medical attention. What followed was 2 nights in police custody until our release.

This was one of the many incidents that I encountered as a student activist under the terrifying years of Mugabe’s rule. Insulting or undermining the office of the president was one of the most common charges used to persecute Zimbabweans for exercising the freedom of speech guaranteed in the constitution.

I was one of the hundreds of student activists arrested, beaten, detained or barred from attending classes during Mugabe’s reign. After the formation of the opposition, Movement for Democratic Change (MDC) in 1999, in which the student movement was very instrumental, Mugabe’s heavy-handedness towards student activists in tertiary colleges worsened.

The student movement became part of the newly formed MDC party after their grievances on the privatisation of education and generally deteriorating macro-economic conditions had been ignored by the ruling party ZANU PF. Student leaders and activists became prime targets of Mugabe’s politics of repression. For the record, students were killed, some banned from studying in Zimbabwe for life while others faced severe suspensions. All this was part of Mugabe’s strategies to silence a critical mass – the students.

We felt betrayed by Mugabe and his generation for their selfishness and greed which had denied the youth the fruits of Zimbabwe’s liberation. Economic collapse, unemployment, corruption and abuse of power motivated me to challenge his reign, though, it was a dangerous path to follow with disappearances, assaults and arrests reported on a daily basis.

After Mugabe’s death was announced Friday, I reflected on his legacy. This was a man who in his first years in power championed a radical policy of education for all and to his credit, a majority of Zimbabweans from poor backgrounds benefited. The dream of education for all by the year 2000 transmogrified into a melodramatic nightmare when Mugabe privatized and commodified studies resulting in the denial of access to advanced schooling for thousands of students from poor backgrounds.

As Mugabe’s legacy continues to be debated, it would be prudent for us to ask whether he was alone in the massive abuse of human rights that characterized his leadership and the destruction of Zimbabwe’s economy. The answer is no. Mugabe was not alone, he represented a system of governance that I call Mugabeism. His ouster in 2017 and the events that followed, in particular, the 1stof August 2018 post-election shooting, the 14th to 16th of January shooting and rape allegations of women among many other rights abuses have exposed the power behind his 37 years of terror. Zimbabwe’s record of human rights abuse continues and is worsening under leaders who attempt to disassociate themselves from Mugabe, yet the more they run, the shadow keeps following at the same pace.

In the end, Robert Mugabe died on claims of being a bitter man by those close to him because he felt betrayed by his trusted lieutenants. In as much as Mugabe felt betrayed, it seems his successors are continuing his legacy of human rights violation and repression. Despite that the man has gone, he has bequeathed us the politics of Mugabeism. For the Zimbabwean pro-democracy movement, it remains: The Struggle Continues”!

This is an updated version of a commissioned article which first appeared on dw.com