Home » Governance » DREAMS OF OUR COUNTRY

DREAMS OF OUR COUNTRY 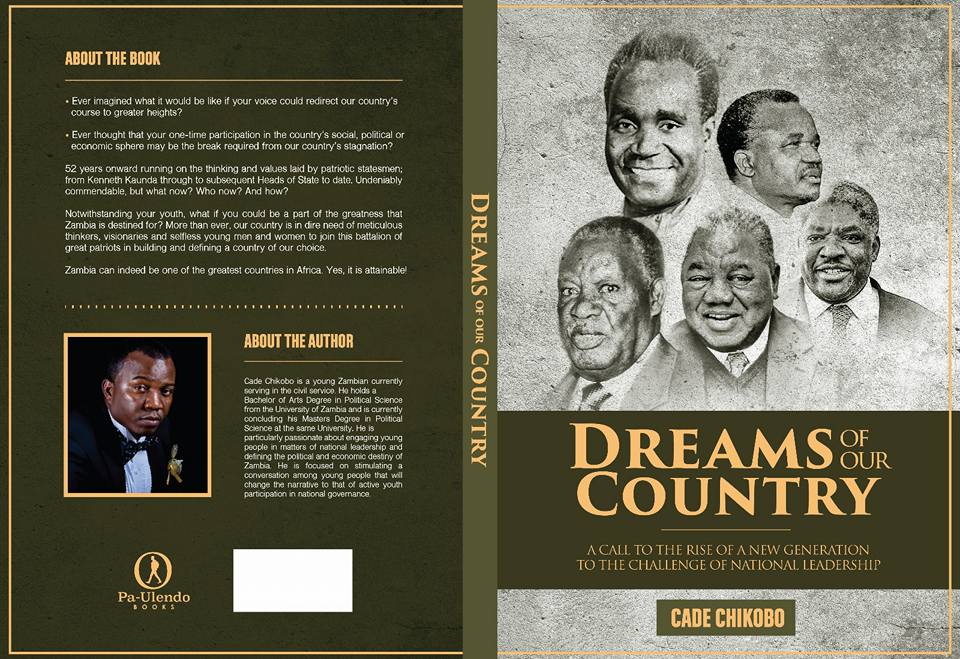 … a book review by Bruce Chooma

My friend of many years Cade Chikobo recently published a book called “Dreams Of Our Country” a call to young people to rise to the challenge of national political leadership. The book seeks to draw a narrative around the concept of patriotism and draws inspiration from the pre and post independence political leadership of Zambia. Cade a political scientist himself working in the civil service asks pertinent questions on how Zambia is governed. He also has a couple of direct concerns about this generation of young people and questions their understanding of their duty to the country and to realizing the independence dream of 1964.

The book starts with a forward from freedom fighter and veteran politician Sikota Wina. This prelude helps to raise the profile of the book and sets the right tone for the discourse that unfolds in the subsequent chapters of the book. As Mr Wina correctly observes, the book comes at a time when many in this country have little attachment to the past glories of the liberation struggle which was carried out by Dr Kenneth Kaunda and a dedicated following of men and women from all corners of Zambia resulting in the hoisting of the independence flag at the independence stadium on the midnight of 24th October, 1964.

Of great interest is the statement by Mr Wina challenging the youth:

“…more than ever before our country today is in dire need if meticulous thinkers, visionaries and selfless young men and women to join the battalion of great patriots in building and defining a country of choice.”

The book has excellent packaging, a nice cover design and a touch of quality in layout and print. Even better is the fact that the book is not intimidating to read, it is a small book and written in easy to read English.

Chapter Three: “Politics with a Difference” addresses the deteriorating quality of national leadership. The author does not mince his words and speaks very candidly in stating that politics should not be looked at as a field for misguided people who are not trustworthy and seek to advance their selfish interests. It is encouraging to read such brave statements challenging the structure of our political and economic system. The author makes a hard hitting call to current politicians to step aside and give chance to fresh blood with new ideas and energies.

“Hitherto most of the politicians that avail themselves for national leadership are those evidently lacking in policy ambition and ideas to steer national development,” the book observes.

The book goes further to call for an overhaul of the current political and economic system. It alleges that a significant challenge for National Leadership is that leaders at every level are not prepared for leadership and calls on young people to start preparing themselves to take over.

My impression is that the book is good at identifying the problems and challenges but is thin on concrete solutions. When one calls for a system overhaul what exactly does that mean and how should it be executed? When the book talks of preparation for national leadership, in what form should that preparation take and which institutions should be charged with this responsibility?

Perhaps one concrete proposal the author makes is around the mining sector whereas he proposes that government should seek to retain 50% shares in all mining companies.

The author makes a good case for motivation, however as a political scientist, he needed do more than just motivate and challenge young people to rise to the challenge. He needed to provide insight and analysis to help readers understand how it got to this. Why are young people so disengaged and so disinterested in politics? Why does Zambian politics not attract the best of our young people? Yet at no time in our country’s history have we had such a huge young population and such high levels of education among young people.

I expected the book to also make a solid attempt to define and clarify the Zambian dream so that the book title gets a stronger link to the content. What is it that our freedom fighters fought for? When and how did that dream get lost?

The book ends with a chapter on God. The author tries hard to justify why this independent issue could be relevant to the overall theme of the book. He praises Pentecostal church pastors for their contribution to the development of Christian values and the growth of the church. This chapter in my view should not have been in the book, because religion is highly divisive and the Zambian experience has actually shown how that the involvement of church leaders in politics has not yielded any desirable results in raising the quality of political representation.

Instead, the country has seen a rise in negative vices like corruption in which some church leaders have been entangled. In fact the fastest growing economies today are not in countries were Christianity is pronounced. The highest growth is in Asia and the Middle East which are predominantly Muslim, Buddhist and the like.

Overall the book is a fine read and I would implore every young person to read. It ignites an important debate that our country badly needs. It should also inspire more young people to write and engage in the discourse around patriotism and the Zambian dream.