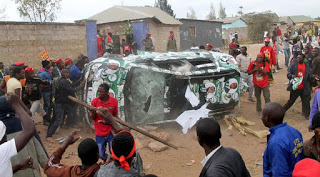 The political temperature is rising as Zambia nears the 2021 general elections. The ruling Patriotic Front (PF) and the main opposition party United Party for National Development (UPND) are not leaving anything to chance. Analysts have put this to the fact that the ruling party has never felt secure with its narrow victory over UPND in the 2016 elections hence its continued efforts to demonstrate who has more power and influence at every opportunity and particularly when there is a by-election.

A recently held by-election in Western Zambia in the District of Kaoma turned into yet another political battleground resulting in the death of a UPND supporter who was allegedly shot by an agent of their competitors. The burial procession of the slain member Lawrence Banda was also marred with violence resulting in the shooting and wounding of a man who was going about his business.

Zambians are worried about the rising gun culture in the country. The use of guns in Zambian politics is a matter of serious public concern.

The Electoral Commission of Zambia recently lamented the blatant disregard for the provisions of the electoral code of conduct with impunity.

President Edgar Lungu directed the Zambia Police Service to ensure that civilians found in possession of firearms in Kaoma District in Western Province, are punished before elections are held on Thursday, October 10th, 2019. This did not happen, instead altercations and discharge of firearms continued.

The President also warned that he would not allow the repeat of what happened during the Sesheke by-elections, as well as the happenings that occurred during the Kuomboka traditional ceremony a few years ago.

Public sentiments are that President Lungu is not doing enough to curb political violence as head of government, commander in chief of the armed forces and leader of the ruling party.

A good governance activist Bishop John Mambo observed that the Patriotic Front and its government were not doing much to curb political violence. He said they were actually fanning it; they were the ones to be blame for this violence adding that the buck on violence stops at President Edgar Lungu.

“We are killing innocent people, we are killing leaders. In killing one person, you have killed his wife, you have killed his children, and you have killed his mother and his father and those depending on him. We have street kids today because of such things. Politics of violence will not take this country anywhere. What we want is to see Zambia grow in its democracy. We have not seen the report on what caused the violence in the last elections that we held in Zambia [the 2016 general elections]. And yet we have continued to pay lip service on the political violence which is happening on every by-election we have. This is not the time that we should have been killing each other.”

“Those that are liabilities, disastrous, must be shown the door. The killing [of a UPND member] in Western Province, where are those guns from? And it’s sad that once the life is lost there is no punishment to those who commit offences from the ruling party. But if they are in the opposition you would hear the headlines in all the public media where I pay tax.”

In reacting to the Kaoma killing President Lungu described the death of a UPND Member in Kaoma and the wounding of others amidst political violence as numbing and detestable.

Commiserating with the family of the deceased and the wounded, the President said no Zambian deserves to die for Politics.

The President has directed Inspector General of Police Kakoma Kanganja to take full control of the Mayoral election in Kaoma and other areas where the elections are taking place.

President Lungu was concerned that political activists were suddenly carrying guns and directed that all the armed should be disarmed and all the culprits of the shooting events be apprehended and prosecuted regardless of their political affiliation.

The President said Police should also get ready for the General elections in 2021 saying people should respect democracy and let popular candidates take the day instead of intimidating people to vote for their candidates.

He said all Zambians should be concerned about frequent violence each time elections are held.

During the Sesheke by-election UPND leader Hakainde Hichilema said police fired live ammunition at him and his supporters during a political rally in the southwest of the country.

“Our lives are in danger as Police and PF cadres are discharging live ammunition at us and our people. We appeal to the Nation to remain calm but steadfast for any eventualities to come,” Mr Hichilema posted on his Facebook page.

“Hichilema’s life is in danger,” he said.

UPND Chairperson Mutale Nalumango said her party had received disturbing news of several of its people being seriously injured after being brutalised and shot by hired PF thugs from various parts of the country.