Home » Governance » Kenya’s Future Increasingly Looks Like Its Past 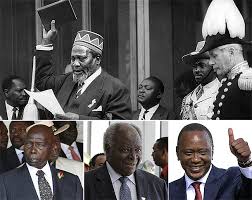 In early 1965, after just a year of independence, Kenya’s first President, Jomo Kenyatta suspected Vice President Jaramogi Oginga Odinga was planning a coup against his government. Deep divisions within the ruling Kenya African National Union – between those wanting radical and populist change to the inherited colonial system and those who were intent on consolidating it and seeking more gradual change – had been exacerbated by the murder of radical Nominated MP, Pio Gama Pinto in late February.

Determined to eliminate the threat, Kenyatta sent the paramilitary General Service Unit of the Kenya Police Force into Luo Nyanza to look for weapons and to intimidate Odinga’s Luo base. As related by Charles Hornsby in his opus, Kenya: A History Since Independence, “there was a press blackout on their activities, which included house searches, beatings and rapes, which were only made public at the end of the month, when angry Luo MPs raised the issue in Parliament”.

Within a year, Odinga had been forced out of KANU and had set up his own political party in opposition, the Kenya Peoples Union. As Hornsby states, Odinga was betting “that Kenyatta and KANU would play by the rules and that the West would ensure they did so.” However, Kenyatta’s patrons were silent during the next three years which witnessed “more serious abuses than were conducted against a political party at any time before or since in Kenya’s history”. These included changes to the electoral system on the eve of, and rigging during, the Little General Election; branding Odinga as a threat to “national stability”; the mangling of the 7 year-old independence constitution to concentrate power in the President and eliminate all checks on it; the reintroduction of colonial-style detention without trial; and intimidation of both the judiciary and the press. The period ended with the murder of Tom Mboya, Kikuyu oathing, a massacre of Odinga supporters in Kisumu, the banning of the KPU and detention of Odinga and his allies.

Fast forward half a century and Jomo’s son, Uhuru Kenyatta, is President and Jaramogi’s son, Raila Odinga, stands accused of attempting to stage a coup. Once again, the latter has been demonized by the ruling party and dozens have been killed beaten and raped by the GSU in Luo Nyanza. The media is silenced, the courts ignored, the state accused of electoral malpractice including engineering last minute changes to electoral laws and a round up of Odinga’s allies is under way. A new constitution enacted just 7 years ago which imposed serious limitations on Presidential power is roundly ignored and institutions meant to be a check on it, including the parliament, are completely servile. All the while, Western powers are silent. Just as in the 60s, they have opted to side with the Kenyattas whom they consider the best bet for preserving the colonial system that safeguards their interests above those of ordinary Kenyans.

So how will this end? Is it likely that Kenyatta will have Odinga arrested for treason? After all, his allies have been charged with abetting treason and the courts may have a hard time convicting them if the person accused of actually committing treason is allowed to wander freely. But perhaps the intention is not to seek convictions but rather to send a message. Still, history suggests some action may be taken though it might not be as drastic or as harsh as a treason charge. The senior Odinga was subjected to two years in detention by the senior Kenyatta and then house arrest by Kenyatta’s successor, Daniel arap Moi. The latter has already been bandied about as a possibility by Jubilee hardliners.

Any arrest of Odinga would undoubtedly spark massive unrest in Nyanza but, just as in the 60s, the Kenyatta government has shown that it is not averse to killing large numbers of citizens in order to cling to power. Further, the likelihood of the international community interfering to stop such is miniscule. Rather than an ideological battleground of the Cold War of yesteryear, Kenya is today on the frontline of other wars against terrorists and Chinese domination. These concerns outweigh Kenyan lives.

Kenya has basically regressed 50 years in the last 7 months and the 2010 constitution’s promise of a democratic renewal is fast fading. If extinguished, history suggests Kenyans may be in for decades of brutal and kleptocratic rule. It will be a steep price for the country to pay for not learning from its past.