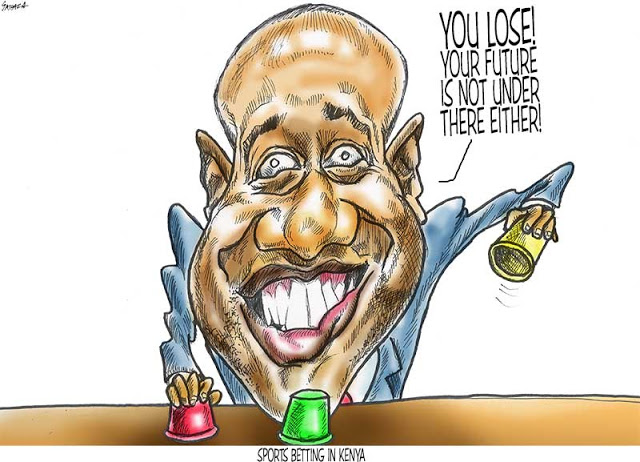 Recently the Daily Nation bravely shone a spotlight on the gambling craze that is sweeping the nation. Sports betting has taken the country by storm. Since 2013 when the first online sports betting company, SportPesa, was registered, the Betting Control and Licensing Board has awarded similar licenses to nearly 30 other bookmakers. The industry today has a turnover of Ksh 2.1 billion which is expected to nearly triple over the next three years.

Yet, as with all gambling, this is not just a good news story about company profits. The fact is those profits are made on the back of broken dreams and crippled lives. While the touted image of gambling is the beaming face of a winner holding his big cheque, rarely seen are the millions of losers and the toll the gambling addiction is taking on families across the country.

In February, the director of communications at SportPesa, Kester Shimonyo, told the Nation that people “should bet for fun but it should not be taken as a fulltime economic activity”. However, taking a chance on the wheel of fortune has been a national activity for a long time. As government has been turned into a looting machine which has destroyed the meritocratic basis of our economy through skewed appointments to office and dubious awards of dubiously inflated tenders to politically-connected individuals, the utility of education, skills and character as guarantors of success has been severely undermined.

Today what matters is the lottery of who you know, rather than the certainty of what. In today’s Kenya, where your last name can, in the words of Kalonzo Muyoka, “betray you”, and where values can be a liability, what does it matter the qualifications you hold, or knowledge or integrity you have?

The declaration earlier this week by Commissioners of the Independent Electoral and Boundaries Commission that they were willing to resign office was also the culmination of yet another a high stakes gamble of the sort that all too frequently seem to be the preferred way to run public affairs. It has been obvious to anyone who cared to look that public confidence in both the Commission and its Commissioners, the bedrock upon which any credible and peaceful election would rest, had long since eroded away. Opinion surveys have shown that citizens across political and ethnic divides had an increasingly dim view of the IEBC with nearly half of respondents in one survey saying the body could not be trusted to handle the 2017 election.

Yet despite this and through weekly public protests called by the opposition beginning April in which several Kenyans died or were brutalized at the hands of the police, and in which many businesses were looted, the Commissioners sat put and refused to budge. Talk of their resigning was peremptorily brushed aside even when the inevitability of their removal became plain. It was clear, like the many other Kenyans staking their lives and fortunes on the turn of a soccer match, the IEBC commissioners were betting on the outcome of the political match between the ruling Jubilee and opposition CORD coalitions.

Like their fellow gamblers, they do not see their future as dependent on their personal performance (already soiled by the failures during the 2013 election), or on their integrity, but on the games played by politicians.

Now following their resignation, Kenya will now embark on her greatest gamble yet. For 3 years, we have ignored the need to comprehensively reform our electoral system, to fix everything from ensuring everyone entitled to vote can acquire a voter card; to cleaning up the voter register; to fixing the petitions system and especially the Supreme Court; to acquiring the requisite technology and making necessary changes to the law to avoid the failures of 2013; to policing party nominations and regulating campaign finance. Now, with a year to go to the 2017 polls, we find ourselves forced to make fundamental changes. It is doubtful that there will be enough time for anything other than “minimum” reforms followed by a roll of the dice and many prayers for peace.

This nation of inveterate gamblers, which has since independence placed similar wagers with disastrous consequences, will once again stake its future, not on its skill and knowledge, but on the games played by its politicians.