Mnangagwa’s visit to China: the ‘easy’ way of doing business 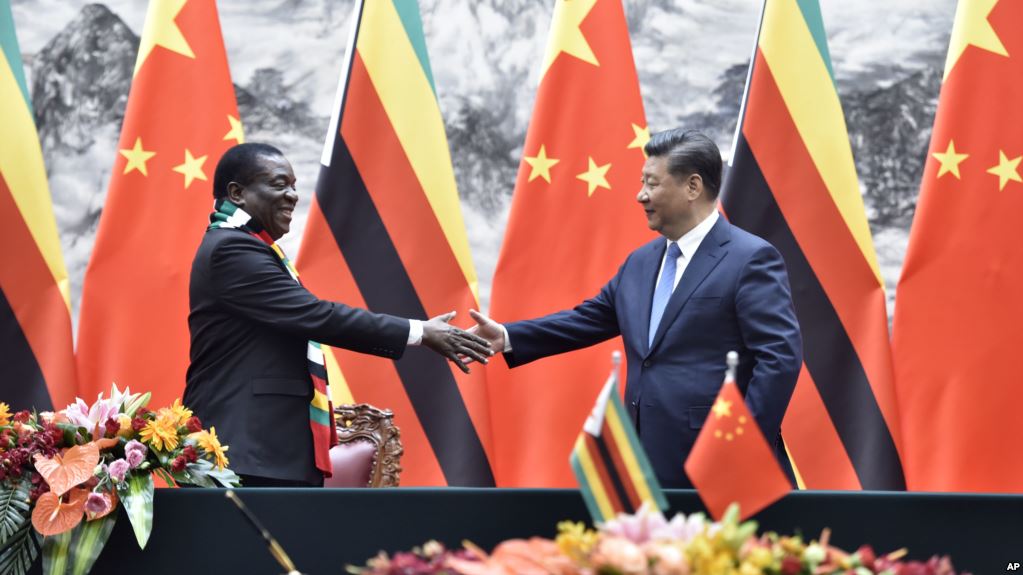 Zimbabwe’s president Emmerson Mnangagwa recently visited China, his first visit outside Africa. Mnangagwa’s visit comes at a time when his government has embarked on a campaign ‘Zimbabwe is Open for Business’ in an effort to attract foreign investment and business opportunities. While the president has been featuring on big international business platforms such as Davos, the visit to China is significant in that it is based on historical bilateral engagements between the two countries that stem back from the liberation struggle. The liberation movement got assistance from China, with military equipment and the training of guerrillas. In this article, I will explain the significance of the visit, the existing bi-lateral relationship between Zimbabwe and China and the implications on democracy and governance in Zimbabwe, especially as the nation, prepares for the harmonised elections to be held in July.

Firstly, the visit in itself is the first official state visit by Mnangagwa outside of Africa signalling the Zimbabwe’s new foreign policy thrust. Though the Mnangagwa administration seems to be enjoying massive support from Britain and other European countries like Russia, China still emerges as the main ally of Harare and thus this visit confirms so. The visit comes against the background of a soft military coup that toppled Mugabe. The military intervention happened a day after the arrival from China of the then army commander Constantino Chiwenga. Chiwenga had travelled at the invitation of the Chinese military. China’s invisible hand in as far as the military action was concerned cannot be ruled out, though Beijing denied its involvement. The relations between Harare and Beijing had soured because of Beijing’s concerns about loan repayments.

It was also said then that during Mnangagwa’s visit to China in 2015, China had raised fears about “Mugabe’s age, Zanu PF leadership renewal, Zimbabwe’s investment climate and ease of doing business, the country’s relations with Western countries, government’s failure to tackle corruption and bureaucratic red tape, among other thorny issues.  The Chinese also said they were worried about Zimbabwe’s high political, economic and country risks, as well as poor credit rating.’’ The Zimbabwean Independent quoting an unnamed diplomatic official. The same story also quoted Wang Jiarui, Minister of International Departments, who is said to have told Mnangagwa that Mugabe’s age was contributing to the Chinese’s lack of confidence in investing in the country as it now part of political risk and that they felt he needs to rest and hand over power to someone from a younger generation with the energy and fresh ideas to tackle the country’s economic challenges.

Secondly, it’s now apparent that the visit is a begging mission meant to get credit lines or ‘assistance’ from China as indicated by the state media. What we have to be open about is the intricate details concerning the so-called assistance that is coming from China and for long the deals and the nature of the relationship has been shrouded in mystery and secrecy, thereby casting aspersions that African countries might be giving more than what they are getting. However, there is no distinction of whether it’s a loan or donation. As a matter of fact, the assistance in itself is no free lunch as it is being portrayed. There are implications to it and as we have learnt in other countries how China has taken advantage of the vulnerability of poor countries that have been desperate for assistance, the Sri Lanka debt trap being a typical example. While Mnangagwa has adopted a free market, and winner take all approach as an economic policy framework to investments it is no longer a secret that we are witnessing a ‘partitioning’ of Zimbabwe’s natural resources under the ‘Zimbabwe is open for business ‘ banner.

But is it really open for business or it is just open for exploitation from China?

Many African countries’ vulnerability has made them negotiate very bad deals in exchange for cheap infrastructure and loans which subsequently trap them in debt. Zimbabwe had by February 2016, not shown commitment in paying at least US$50 million as a payment plan to clear its debts estimated at US$1, 5 billion.

The Zimbabwean government, just like many other African countries need to negotiate on their own terms, identify priorities, and leverage opportunities to further the country’s interests. The efficacy of the Mnangagwa’s Zimbabwe is open for business path is hinged on the begging bowl and mortgaging strategy. Fundamentally, a diagnosis of Zimbabwe-China engagements is critical to unpack the latest developments; 1) Is the Mnangagwa’s approach new and will it bring the desired development? 2) What is the difference from the so-called mega-deals signed under the Mugabe leadership, is it a continuation or are they new deals? 3) How transparent have been these deals and 4) How are/have they changing (ed) the structure of the Zimbabwean economy, i.e. job creation, ending rural poverty especially in the exploited mining communities by Chinese companies who have been syphoning millions of dollars from their mineral operations?

In reference to the Chinese mining companies in Chiadzwa, Mugabe lashed out at the Chinese following reports of massive leakages and smuggling of the gems out of the country and failure to develop communities affected by mining activities.

Conversely, if we were to do the calculations on the worth of these ‘mega deals’ signed so far it won’t be shocking that the total figure is alarming. And in that scenario, Zimbabwe’s economic woes and cash shortages would have disappeared ever since we started signing these mega deals. Therefore, they can be no doubt that some of the figures being reported in the state media are deliberately inflated to create some sort of expectation and hope especially that elections are around the corner. A brief synopsis on some of the mega deals can buttress the point I am trying to put across. Are they real deals or begging bowls?

In August 2014 president Mugabe signed nine mega deals which the Herald newspaper reported as “economic enablers in critical sectors that include energy, roads, national railway network, telecommunications, agriculture and tourism as part of the Zimbabwe Agenda for Sustainable Socio-Economic Transformation.’’ The mega deals were supposed to come with a $4 billion aid and investment package of these projects and that also includes a loan amounting to over US$1,1 billion for the expansion of Hwange Power Station and TelOne’s broadband access project. What happened to these nine deals?  In 2012 the government announced that China Railway would invest $1.2 billion to develop a high-speed train route between Harare and Bulawayo. In 2016 the Sunday Mail also claimed that China will provide US$6 billion for national housing delivery and agriculture programmes. Up until today, Zimbabweans are still to realise the implementation or benefits of these deals.

Consequently, we should unpack the latest $500 million mega deals signed by a little known Zimbabwean companies Platinum Agriculture and Princewood Enterprises. A quick google search results on the companies will only give stories from the said deal and interestingly a court case between the companies and a company called Potato Seed Production, raising questions about the credibility of the company and its capacity to deliver. The companies have neither a website nor any other google search hits apart from the $500 million deal reported in the state media. The whole thing seems dodgy typical of Chivhayo’s ‘briefcase’ company Intratek. Do they have the capacity to handle and execute such a big deal? Zimbabwe needs answers. Who is really behind these firms?

Thirdly, that Mnangagwa’s visit is coming a few months before the harmonised elections is also quite significant in terms of understanding China’s role in political and electoral processes in Zimbabwe and it goes against the long-held notion of non-interference approach by China. It is no longer a hands-off policy by China, but it is interested, example being its involvement in Sierra Leone, Zimbabwe’s 2013 elections, and the invisible hand of the Chinese in the Zimbabwe coup.  Already there are controversies with regards to China’s involvement in internal politics in African countries, with Sierra Leone being the latest example where the Chinese were seen wearing party regalia campaigning alongside the All Peoples Congress raising the issue of direct partisan involvement by China in Sierra Leone’s political process.

Importantly, it also raises questions on the mortgaging of resources and key national economic assets to get electoral assistance by ZANU PF. In the 2013 elections in Zimbabwe, it was reported that ZANU-PF’s election campaign was partly China-funded, with the party for instance ostensibly receiving one million campaign T-shirts from the Chinese government. President Mugabe also told his central committee that China had given them money and vehicles for campaigning. Moreover, a Zimbabwean newspaper quoted an anonymous army intelligence source alleging Chinese bankrolling of the Mugabe campaign. Therefore, this trip  should not be looked at in isolation, but also it is being used under the guise of a state visit but also as a fundraising trip for ZANU PF campaign, thereby undermining our sovereignty.

The previous paragraphs unpacked China’s role during the coup, but the post-coup reconstruction period raises questions on the democratic implications on Zimbabwe and the myth of China’s non-interference notion. The recently proposed changes in the Chinese political system that removed term limits for president Xi Jinping are a worrying development and raises big questions about democracy. What message are they (African leaders) learning from China in as far as term limits and democracy is concerned? Such a move has serious implications on democratic values as it props up the one leader mentality undermining constitutional democracy and propping up of dictators.

In conclusion, while it is necessary for Zimbabwe to extend its hand to superpowers for business our government needs to reconsider the manner in which it conducts its business with China and other global powers. From the side-lines, it seems that the scale of relations between Zimbabwe and China has been growing but improvements in the benefits being offered to Zimbabwe is less than sufficient to what is expected. It remains an empirical issue whether the relations between China and Zimbabwe have been beneficial. Conversely, the question for policymakers in Zimbabwe is that they should adopt a more circumspect approach towards especially in Zimbabwe is open for business campaign. On relations with China we should be aware of exploitative dangers associated with such arrangements, but more importantly, Zimbabwe needs to be strategic in how Chinese interest can be exploited to Zimbabwe’s advantage. The Zimbabwe-China relations present some opportunities and challenges at the same time, therefore we need a strategy that is embodied in our foreign policy so that we embrace the opportunities offered by the relationship with the Chinese but on the other hand, it should preserve and promote its interests.