Parliament of Zimbabwe’s Crass Materialism in the Midst of Poverty 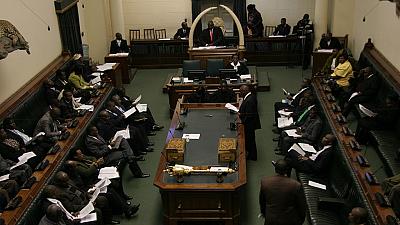 Recently Zimbabwean Members of Parliament (MPs) in the National Assembly  staged quasi –protests over a reported outstanding US$15 million in unpaid ‘sitting allowances’.  This is not their only grievance. They also want to be given iPads (apparently promised last year), the disbursement of the controversial US$50,000 Constituency Development Fund (CDF),  diplomatic passports and security details.

And they chose their protests at a time they probably feel they can force government’s hand.  It is national budget season and they have made headlines by stopping proceedings of at least one of their own budget review workshop to seek clarity from the new minister of finance, Ignatious Chombo.  The intended effect is to imply that if their demands are not met, they may not be willing to pass his 2018 proposed national budget.

I am certain that in their actions they are most certainly not looking for public sympathy to their plight, if it can be called that at all.

They are already on a US$2000 monthly salary and get fuel coupons for their, again, parliament issued vehicles. They however insist on getting what is due to them because, as one MP was quoted in a local paper saying, they are ‘subsidizing’ government in their respective constituencies.  By this the MP meant that they are using their personal resources to pay for funerals, school fees of their constituents.  Other MPs are a bit more brazen in stating their reasons for their ‘industrial action’. They just want what was promised them and also that they are as important as members of the executive and therefore deserve to be given somewhat equivalent perks.

It’s a significant dose of political luck that there has been no major public oturcy against the MPs demands.  And the reasons for this are many.

First of all, Parliament is generally not viewed as being of much institutional significance by a majority of  the Zimbabwean public.  Make no mistake its part of our national political culture, but is never seen as a centre of political power by way of practice or democratic virtue/principle.  This is largely because it has come to be about political party representation and commandeering of legislators from the top or the centre of the political party as opposed to constitutional democratic function.

Secondly, and this is a result of the first reason, Parliament’s actual democratic role is little understood by the public.  So the expectations of the role of MPs is not that they  rein in the executive’s  undemocratic excesses.  Instead, the MP serves, especially if directly elected, as a social welfare provider (assistance with school fees for supporters).  And the MPs themselves are fine with with this because it is also what gets them elected in the first place.  And because we have harmonised elections scheduled for next year incumbent MPs are desperate to provide these services ahead of what will be tumultuous primary election campaigns in their respective parties.  And this also goes for their challengers who have also started usurping what should be the function of local governments by rehabilitating local clinics or resurfacing roads or paying school fees of the children of supporters.

The end effect of such an evidently materialist political culture is that it is the candidate with the most resources/tools for patronage that ends up winning both the party primary election and the constituency one.

I am certain a number of MPs who may read this blog will argue that  it is money that wins elections.  While this may, in our national context, be a pragmatic point, it is one that severely undermines the meaning of democracy.  Moreso where and when we have serving and potential MPs who are at the forefront of ensuring such a crass materialism in our national politics continues not only to exist but potentially expand.

If one was to seek to apportion blame for this ‘political materialism’ it would lie squarely at the doorstep of political party leaders who have allowed it to not only exist but also blossom.  Particularly those in the ruling party and the mainstream MDC-T opposition.

But beyond these players, it is also an electorate that accepts this as the norm.  Not by way of an inexplicable eagerness but more because they see no other option. Or are not allowed to see any other option.   Both by way of a lack a people centered state and by way of elite collusion of political leaders together with the wealthy (individuals, private corporations) who will always seek to purchase votes and political influence.

So while I hold no brief for MPs who already earn a comparatively significant US$2000 per month, together with other perks, their recent actions point to a dire problem we have with our national politics.  This being a crass materialism attached to not only being in political office but also seeking it.