Political Cartoonists Are Our Canaries 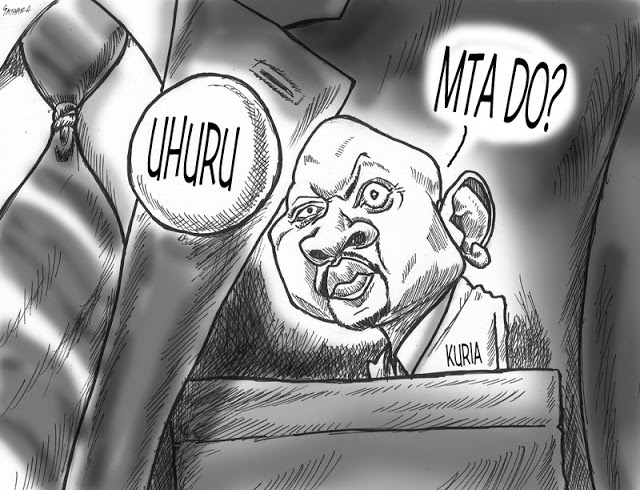 In his column for the Daily Nation, Peter Mwaura, the paper’s public editor, has on more than one occasion taken issue with my cartoons. In his latest offering, he accuses me of being unethical, of contravening both the law and the editorial policy of the Nation Media Group, as well as malice for the above cartoon that situates a defiant Moses Kuria in President Uhuru Kenyatta’s pocket shortly after he was caught on camera telling armed youth to attack critics of the National Youth Service. Mr Mwaura believes that including the President’s name in the image is the equivalent of “dragging the name of an innocent friend or acquaintance in an act or charge of crime”.

Mr Mwaura appears to premise his piece on the complaint of one reader. It is important, at the outset, to note that I welcome criticism of my work. It is always humbling when someone takes the time to critique and offer feedback. Not for me the “positivity” crap that seems to be all the rage in the press and on social media, urging us to always wear our rose-coloured glasses. However, the issues Mr Mwaura raises need to be addressed as they go to the very heart of editorial cartooning and, more broadly, to the freedom of expression.

But beyond that, it is important to distinguish editorial cartooning from reportage which seeks to render factually information to the reader and is constrained by the requirement of accuracy. The former belongs to the twin genres of media commentary and political satire. Cartoons are about opinion and caricature. In their paper, Censorship and the Political Cartoonist, Dr Haydon Manning and Dr Robert Phiddian, both of Flinders University, write that “cartoons are a part of opinion-formation in liberal democracies that enjoy … a special licence to make exaggerated and comic criticisms of public figures and policies. Cartoonists are employed by newspapers principally to entertain readers and to provoke thought; often they are the part of the paper least disciplined to an adherence to any editorial line.”

Thus Mwaura is partly right when he says editorial cartoons are no laughing matter. In seeking to make their point, cartoonists employ biting satire and abandon fairness and objectivity.  In 1988, the US Supreme Court, noted that “the appeal of the political cartoon or caricature is often based on exploitation of unfortunate physical traits or politically embarrassing events – an exploitation often calculated to injure the feelings of the subject of the portrayal. The art of the cartoonist is often not reasoned or evenhanded, but slashing and one-sided.”

And make no mistake about it. Political cartoons will offend. No one likes to be skewered or to see their favorite politician or deeply held belief caricatured. Yet this is exactly what cartoonists should seek to do. Not just reflect society’s beefs but challenge society itself and its most cherished institutions. A good cartoonist, like a good journalist, does not pander to his audience. “No political cartoonist is worth his salt who misuses his valuable space by drawing inoffensive, pretty pictures about the news,” wrote Scott Long, an American cartoonist, in 1963. “A political cartoon is a weapon of attack to be used against the evils and the follies of society. It is potentially the strongest weapon in modern journalism.”

So when Mwaura demands that a cartoon “[not] convey inaccurate information or offend good taste” he is asking to neuter a medium which does not report the news, but comments on, distorts and lampoons it. Such a prescription would destroy the soul of political cartooning, reducing it to a series of anodyne, tasteless, valueless “pretty pictures about the news”. However, a bigger issue is at stake. And it revolves around the ability of the public to hold the powerful to account.

To do this, unfettered debate and expression on matters touching on them must be encouraged. In a democracy, political statements like “the government has failed” or “Jubilee is corrupt” must be protected. If we were to require everyone saying such to provide proof beyond reasonable doubt, public opinion, one of democracy’s most potent weapons, would be eviscerated. Public figures have inordinate influence over our common affairs and the cost of that is they will be exposed to greater public scrutiny. They thus can expect to relinquish, though not entirely, some of the protections enjoyed by ordinary folks, hopefully compensating for that by growing extra layers of dermis.

One could therefore rephrase the issue thus: Is it wrong or unethical to express the opinion that Uhuru Kenyatta (or his government) is protecting Moses Kuria? When expressed that way, it becomes clear that the challenge is not just to cartoonists, but to all within society. As Manning and Phiddian say, political cartoonists are the “canaries sent down the mine shaft of public debate to discover how fresh the air is there, how safe for freedom of speech.”