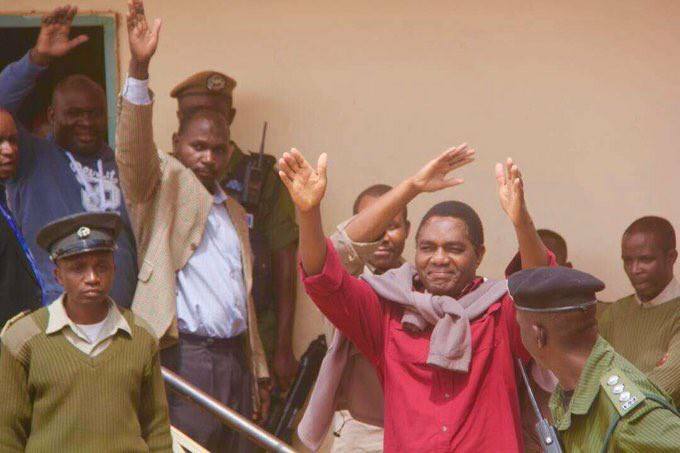 On 10th April, 2017, Zambia Police invaded the house of leading opposition United Party for National Development (UPND) President Hakainde Hichilema. The Police switched off power at the house, blocked the main roads and then broke down the gates to the house to gain access to the house before firing teargas into the house. The night-long raid ended the following morning when Hichilema was finally apprehended and later slapped with a treason charge among others.

His arrest came amidst Hichilema’s continued insistence that he would not recognize Lungu as President of Zambia because the Courts failed to hear his petition challenge the electoral outcome that ushered President Edgar Lundu into power last August. At Hichilema’s instigation, UPND Members of Parliament have also been boycotting parliamentary proceedings whenever President Lungu addresses the House.

A few days earlier both President Lungu and Mr Hichilema attended the Kuomboka Ceremony in Mongu, Western Zambia. Their motorcades met on their way to the ceremony driving in the same direction with the Presidential motorcade forced to overtake Hichilema’s motorcade rather violently, a situation that some analysts and ruling party functionaries described as endangering to the life of the President.

Civil society actors, the international diplomatic community and political party leaders have continued to condemn the manner in which Hakainde was arrested and calls have been made at home and abroad for his immediate and unconditional release. The latest voice came from the local Catholic Church, in their pastoral letter, signed by Archbishop of Lusaka Telesphore-G Mpundu, on 23rd April, 2017 who is also President of the Zambia Conference of Catholic Bishops.

“There is fear and trembling among the people shown in the way they are afraid to speak out against injustices. This is due to several actions by government which were meant to instil fear into and intimidate the masses.” Reads the statement.

“We do not in any way condone illegality. We nevertheless deplore the massive, disproportionate and entirely unnecessary force with which the Police acted in apprehending him. Would it not have been much more civilised and professional to deliver a summons to him containing a charge and ordering him to appear before the police to answer charges of alleged law breaking? The brutal way in which the Police acted has only served to heighten the already considerable tension in the nation particularly between supporters of the UPND and PF.”

Mr Kanganja insisted that the actions by the opposition leader were unreasonable, reckless and criminal. He said the police had closely analysed what transpired in Mongu district of western province on Saturday the 8th of April 2017.

“It has been established that the opposition leader disobeyed police orders to give way to the Presidential motorcade on Limulunga road in an attempt to put the life of the Republican President in danger,” Mr Kanganja said.

The United States government and its European Union partners have condemned the incarceration of opposition UPND leader Hakainde Hichilema. The US Embassy in Lusaka has also called for dialogue between the government and the UPND following the April 8 clash. The Embassy said it remained concerned about the heightened tensions between the two parties after the April 10 raid of the opposition leader’s residence.

The statement issued on 13th April by the US Embassy reads in part:

“The U.S. Embassy remains concerned over heightened political tension in Zambia, specifically noting the April 10 police raid of opposition leader Hakainde Hichilema’s Lusaka residence and his subsequent arrest for treason. The U.S. government urges all actors to exercise restraint in addressing differences, to respect the rule of law and electoral proceedings, and to follow the due process Zambians expect from a country with a reputation for political pluralism and peaceful conflict resolution.”

The catholic Bishops also noted in their statement that the continuous tension between the UPND and PF had affected the lives of many other citizens in the country who are living in fear and are not going about their business of life freely. The Catholic Church is thus deeply saddened by the incidents of unprofessional and brutal conduct of the Police Service, the damage to the innocent citizens’ property by suspected cadres, the arbitrary arrests of and horrific torture of suspects as well as the careless, inflammatory and divisive statements of Zambian political leaders.

“It is our considered view that as a nation, we have lamentably failed to robustly address a number of recurrent snags including those that stem from our previous elections. The current political predicament directly flows from deep-rooted problems we have failed to fix or resolve, not withstanding four constitutional commissions of inquiry. As we have stated before, the political environment in Zambia, today, is characterised by manipulation, patronage and intimidation of perceived government opponents. We urge the government to stop using state security institutions to intimidate its own nationals. The police service in particular must be professional and impartial in carrying out their duties of maintaining law and order. Too many of the nation’s resources and time are wasted”

The Catholic Bishops also took a swipe at the Judiciary in Zambia.

“Unfortunately, the Judiciary, the arm of government responsible for adjudicating between individuals and between institutions and delivering justice did not do much, if anything, to engender a mutually acceptable solution… It is an open secret that the Judiciary have let the country down by failing to stand up to political manipulation and corruption. How can one explain the failure of the Constitutional Court to hear and exhaustively conclude a presidential petition?”