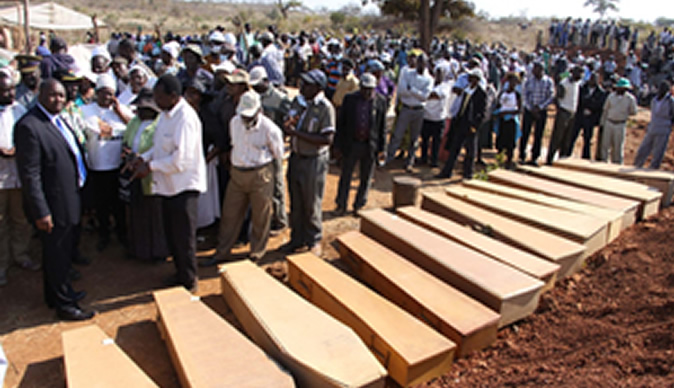 On my recent visit to Zimbabwe, I took time to attend an exhibition of the Chibondo Genocide at the National Heroes Acre in Harare where liberation heroes are buried. The exhibition was put together by the National Museums and Monuments of Zimbabwe.

It’s a story of how in April 2011 Zimbabweans wake up to a rude shock when hundreds of bodies were discovered stashed in a disused mine. According to Rumbidzai Bvira, a historian and curator of the National Heroes Acre, the Chibondo (formerly Monkey William mine) exhumations were carried out in the context of giving former freedom fighters lying in shallow graves and disused mines, decent reburials.

The exhumations brought sadness across the country as bodies kept coming out mostly of freedom fighters. It is believed the extra-judicial killings were carried out between 1972 and 1979. However the episode having come just before a general election then was a subject of much propaganda as this article shows.

As the Museums Board took over the exhumation of bodies from the disused mine, various sections of the Zimbabwe society had varying interpretations as to how and who carried out these killings. About 850 bodies were exhumed. However some writers contend that up to 10, 000 human remains were a result of this genocide killed by the British and American backed Rhodesians between 1972 and 1979.

At Chibondo, which aptly means “little bone”, harrowing tales have been told about the way Rhodesian forces conducted the genocide. The Rhodesians would round up entire villages and homesteads and shoot them at point blank range.      Some did not die in the shootings but all were dumped in the mine shafts and grenades, teargas The Rhodesians would then seal the shaft entrances with grenades, which would then go off resulting in cave-ins to ensure no one left Chibondo alive
Blacks who were used to cart the bodies of the dead and half dead to the shafts were also shoved into the shafts before the grenades sealed them off and chemical arms were tossed in after them.

After the exhumations, government did not have resources to carry out a DNA or forensic investigations of the bodies and could only carryout archeological analysis of the remains. “Forensic tests and DNA analysis of the remains won’t be carried out”, instead, “traditional African religious figures will perform rites to invoke spirits that will identify the dead”, said Saviour Kasukuwere, a former government minister who was at the time responsible for black empowerment said.

The museum is still seeking support for ways to carry out further analysis and research. The Chibondo memorial site at Mt Darwin in Mashonaland Central is a deplorable state with government failing to maintain the site and develop a national monument as promised due to lack of funds.

All the remains of Chibondo were exhumed from one main shaft approximately 90 meters deep. The shaft stratigraphy can be divided into three main sections or levels. These were the upper, middle and lower sections. The exhumations did not go beyond 90 metres as at that point government stopped the process.

Ms Bvira explained to me that a number of pathological inferences could be deduced from the status of the bodies analysed. A prominent feature of the pathologies is the violent nature of how the victims met their death.

The first strata was 0 – 50 meters deep which, consisted of highly decomposed bodies mostly in skeletal state which were also highly defragmented and could not be assigned individual status. It is believed that the bodies were bombed to destroy evidence. They were bodies mostly of civilians indicating the intensity of the war.
“Two important dates emerged from this stratum: 1976 (Southern Rhodesian Identity Card of Phanuel Kahowa) Issued at Mt Darwin on 8th May 1976. The original Mt Darwin stamp is still visible and readable. This evidence collaborated with the oral testimony of his son who said his father was abducted on11th July, 1976 at 5PM and was never seen again until April 2011 when the exhumation at Chibondo happened.”Ms Bvira explained.

The middle strata 50 – 70 meters deep recorded a high prevalence of uniformed combatants with high occurrence of Chinese uniform as well as Russia, Yugoslavia and Ethiopian uniforms. Most bodies recovered were wet because this was below the wet line. These were bodies of men mostly in uniform these were military combatants during the liberation struggle, a lot of military paraphernalia was recovered here. The bodies were mostly intact as they were exhumed from a mixture of water and acid which helped to preserve them. The stratum was dated 1974 on the basis of a Rhodesian herald newspaper which was recovered from the pocket of one combatant soldier’s uniform pocket.

The lower stratum 90 meters and below and much below the wet line had bodies that were intact and decomposition only occurred when the bodies were brought to the surface. The exhumation process was stopped at 90 meters. This was however not the sterile level of the stratigraphy as bodies continued to be found below this level.

“People questioned how bodies that died in the 1970s could be still intact and not decomposed. It is possible that indeed these bodies were from the 1970s because one Zimbabwean hero Alfred Nikita Mangena died in Zambia in 1978 and was buried in a wetland. His body was exhumed and he was found intact including his beard. Basing on the material recovered from mine shaft the dumpings were carried out between 1972 and 1979. Recovered materials included payslips, newspaper cuttings, wallets and others. The mine was a no –go area and thus locals could not recall what actually happened around that area,” Rumbidzai explained as she took us through the exhibition.

A recent article by The Herald quotes Godhi Bvocho, an archaeologist and the Principal Curator of Monuments at the National Museums and Monuments of Zimbabwe as he retells the story of the ghastly sight at Chibondo as a marker of a historic war crime. He gave further evidence dispelling allegations that some recovered bodies were from more recent killings.

“We found cigarette packs of brands such as Envoy that was last manufactured in 1978; newspaper cuttings of The Rhodesia Herald and Sunday Mail — one was dated July 31 1972. We also found one and two Rhodesian dollar notes on some people while in one we found a payslip and employment card of someone who was a messenger and we used this to trace his family and they told a story of how he had been sold out,” he explained.

The spiritual aspect was also at play and some relatives came to claim their dead loved ones. The government however did not allow anyone to carry their dead loved ones and bury them. They were all buried together at a place which is now a national monument in the liberation heritage category

Zimbabwe established a Fallen Heroes Trust in 1981 which has to date identified over 200 mass graves throughout the country. It has also identified over 1, 000 individual shallow graves. With the support of spirit mediums and prophets over 50 children have been re-united with their families.

An interesting article by The Patriot asks why decades after the end of colonialism, mass graves and further evidence of the atrocities perpetrated by Europe in Southern Africa continue to be discovered, raising questions to why the region has not made an attempt under international law to claim compensation for the brutalities.

To date only the Herero of Namibia have followed the example of the Mau Mau in Kenya to take Europe to task over genocide and other crimes against humanity in much the same way that the Jews — up to today — are being compensated for what Nazi Germany did to them.