Home » Governance » Re:repulica: A Beehive of Activity in the Midst of Rich History

Re:repulica: A Beehive of Activity in the Midst of Rich History 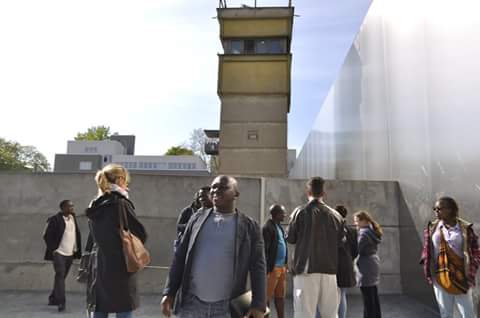 My recent visit to Berlin, Germany attending re:publica TEN, was graced with equal measure of surprises and great impressions that for the most part met my expectations. The keynote speech at Stage One was memorable. The founders of the conference took us down memory lane and gave emotional speeches of how far they had come to get to where some of us who were first time participants joined the world wide family of bloggers. The security was watertight and the pomp that surrounded the Conference was splendid. The first impression my mind registered was that this was going to be very good and I looked forward to the second day.

The conference was action packed and at times difficult to choose talks to attend.  The afternoon of the first day was more tempting and tricky. As a blogger from the African continent I had to choose between watching a live broadcast of Edward Snowden and attending the discussion on Social Media Shut downs in Africa. On my way to Berlin, I left my homeland, Uganda limping out of a highly disputed General election and the country was grappling with the post electoral trauma.

The Forum for Democratic Change, a party to which I subscribe, was also defying the whole electoral process outcome on account of electoral mismanagement. Due to the fact my home country was a fresh victim of Social Media shutdown; I wanted to listen to my brothers and sisters from the continent to get an experience of what they were going through and perhaps share my experience with them as well. Those who were on the stage represented us well as Africa Blogging!

Being at the Republica did not only come as an opportunity for me to experience how other bloggers manage to have their opinions read and heard but also a chance to learn from fellow bloggers about a great deal of intolerance to voices of dissent exhibited by some governments. Listening to bloggers like Johnny Haeusler, one of the founders of re:publica, ushered me not only into his humility but also his ingenuity that has seen him nurturing his newest idea tincon.org for the young people in Germany.

The Berlin tour left me with an excellent but a challenging impression. I came to the realisation that in order for a nation to prosper, it must jealously guard its history and those experiences whether good or bad will be the shining stars that will determine where that nation wants to go. The Berlin Wall, Stasi Prison and the House of the Wannsee Conference all showcasing the level of intolerance a people can develop against a certain group of people all happened but for a reason. The people of Germany will never hate themselves again as much they love what they are and stand for as a nation.

Guided through the Deutscher Bundestag, I could not help but marvel at the wonderful display of art and architecture which not only leaves a mark on every person’s mind but is a sign of the good workmanship of the people of Germany. As I read “A walk round Parliament and its buildings” I was not only amazed by the magnificent buildings around but by the parliamentary democracy of Germany. The power that Bundestag has is guarded and protected for the good of Germans and not the ruling party. To me, a blogger focussing on the concept of rule of law and democracy I was enriched by the way Germans govern themselves.

Back home in Uganda our Tenth Parliament commenced parliamentary business by receiving bribes to elect a Deputy Speaker who belongs to the National Resistance Movement (NRM) yet the NRM boasts of having the majority in the house. It was quite evident that having big numbers in the house was no longer a guarantee of an outcome. My first impression of the tenth Parliament of Uganda triggered the question whether Parliamentary democracy was still relevant in Uganda. It is going to be a long five year wait for reason to prevail again.