Home » Governance » Samora Machel’s warning to Zimbabwe on Mugabe: Not yet Uhuru

Samora Machel’s warning to Zimbabwe on Mugabe: Not yet Uhuru 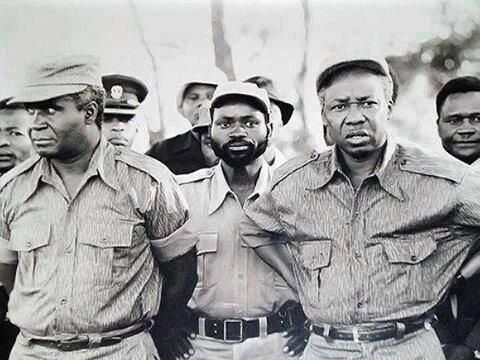 The month of October casts a dark cloud over of our Mother continent Africa, as it swallowed great revolutionaries who greatly shaped the struggles against colonialism and imperialism. On the 19th of October 1986, Samora Moisés Machel the first President of Mozambique died when his presidential aircraft crashed near the Mozambique-South Africa border.  We will never forget on the 15th October 1987 and 14th of October of 1999, Mother Earth called Thomas Isidore Noël Sankara President of Burkina Faso and President Julius Kambarage Nyerere of Tanzania to rest. Giants in the anti-colonial struggles, Nyerere and Sankara departed leaving an indelible mark that will forever be engraved in our hearts in the same way that President Samora Machel did.

As we commemorate the luminaries we remain mindful of what they stood for and their vision for Africa to be a great continent to live for future generations. However, the purpose of my article is focusing on the legacy of President Machel, a towering figure in our struggle for liberation. With other leaders of the Frontline States, Machel provided solidarity in form of military and social support for Zimbabwean fighters as they waged a protracted war against the Smith regime. Had Samora been alive today I am sure he would be saying to Zimbabweans remember my warnings on Mugabe given the state of affairs in Zimbabwe right now. Those who were at the forefront during the war gave narrations of how Machel was sceptical of Mugabe assuming the leadership of the revolutionary movement. At least he had seen beyond!

Dzinashe Machingura a commander during the struggle said that Machel had very profound misgivings about any thought of granting Robert Mugabe any importance whatsoever, let alone viewing him as being some kind of central-player-in-the-making. Dzino explained of an incident, a meeting between Frelimo and ZIPA command structures in 1976 in Mozambique at the height of the war. Samora had called for the meeting with the ZIPA leadership to discuss its long term plan with regards to Zimbabwe’s prospective leadership. Mhanda aptly illustrated the moment:

‘’Rex Nhongo then submitted our list, with Mugabe at the top. Machel leapt from his chair in disgust. He was clearly not happy that we had included Mugabe, let alone as the leader. He went on to tell us that he had removed Mugabe from the refugee camps for a good reason: ‘He loves the limelight,’ and is opposed to unity.’’

However, President Machel went on to accept Mugabe as its new leader, but Machel was not far from the truth as evidenced by Mugabe’s selfishness as he has morphed himself into a life president. A notion against the ethos of the revolutionary code that leaders come and go.

Again, in 1974 Mugabe had previously been rejected by the Frontline leaders after he was released by Smith to go and meet the Front Line leaders, Kaunda, Julius Nyerere (Tanzania), Agostinho Neto (Angola) and Samora Machel (Mozambique). According to Dzino and corroborated by Rugare Gumbo in an interview with China Global Television Network, that  Nyerere especially was so angry at the idea of a leader being so obviously sent to them with Smith’s connivance that he refused to talk to Mugabe and demanded that he and his followers go back to Rhodesia and return with Sithole.

It is evidently clear that Robert Mugabe was a blue eyed boy of Ian Smith, contrary to the Pan African giant he portrayed himself. The late Joshua Nkomo’s biography The Story of My Life, page 10, made the same revelations about how Mugabe used to get preferential treatment in jail, allowed to organise meetings that orchestrated a coup against Ndabaningi Sithole. Here is Nkomo:

‘’Next morning we gathered for our meeting with the presidents of the black nations of Southern Africa who were in the front line states of the struggle against racism. Julius Nyerere walked in off his plane and greeted us all, and the first question he asked was: ‘Where’s Ndabaningi?’ The Zanu team, surprisingly enough, did not include Sithole, whom we all regarded as president of that party. Instead there were its secretary general, Robert Mugabe, and its secretary for youth and culture, Morton Malianga. It turned out that five members of the Zanu central committee had been kept in prison and allowed to hold meetings there. This tiny group, without consulting their members or their colleagues, had decided to depose Sithole as their president: Mugabe and Malianga were acting as their spokesmen.  Nkomo went on: ‘’The presidents could not accept these two relatively unknown people as valid spokesmen for Zanu, so they were sent off to wait in their rooms while the business of the meeting was tackled.’’

All this points out to some interesting observations, that Mugabe’s role in the liberation struggle is rather a vanitisation of a narcissist geriatric posing, and posting his selfies. Secondly, our history books are so distorted in their eulogising of Mugabe, and in the fullness of time intellectuals, historians and writers must revisit that area and give Zimbabwe a correct narrative of the liberation struggle.

The Kudzai Chipanga’s of this world and many of the sycophants who have elevated Mugabe to God should however be reminded that Zimbabwe belongs to all of us and inspired by many generations before us who were fearless and not Mugabe and ZANU PF. President Mugabe is inherently insecure and forever threatened by fear of the unknown. As we remember Samora Machel, Zimbabweans must stand firm in defence of the ideals of the liberation struggle and independence which the genuine heroes fought so hard to achieve. We should defend the legacy of all departed comrades who fought for real freedom, not for the freedom of one family and a few cronies.

The war of liberation was not an individual struggle

For ZANU PF they have forgotten that the liberation struggle was not an individual, or a one party struggle but rather it as to free all the masses of our people from the yoke of dictatorship under a racist imperial white settler regime. The recent political developments are just but an indication that ZANU PF is a self-serving party which has used the liberation narrative as an excuse to stay in power. Various political formations, the youth movement, civil society, trade unions have since independence decried the economic decay, underdevelopment which has had to accompany political liberation.

Sadly, a majority of Zimbabweans have left the country and are scattered all over the globe because of oppression, economic exclusion as people are still trapped in the poverty and starvation that existed under colonial domination. President Samora Machel’s warning indeed cautioned of what we are experiencing under a self-serving leader. Mugabe’s rule has been characterised by dictatorship, patronage and extremely intolerant forms of leadership. His inability to persuade and politically convince those that disagree with him, has resorted to use of force and coercion as his leadership style.

A tale of two liberation movements

There is no doubt that Mugabe has been the biggest curse that Zimbabwe has ever got, his empty rhetoric as the champion of black empowerment has remained on his mouth. Since ZANU PF got another mandate after the ‘resounding’ victory in 2013, the party has dismally failed to transform Zimbabwe through their ill-fated ZIMASSET blueprint which has since gathered dust. The party’s obsession with elections is worrisome as if a new mandate in 2018 would translate to a new order of development and economic recovery.

Mugabe like all ancestral spirits who from time to time need appeasement through traditional rituals, has become a living ancestor who, despite facing no challenge from within his party needs regular endorsement to reaffirm that that he is the ultimate leader of ZANU PF. For example, they have already indicated that the party is going for an extraordinary congress in December to ‘endorse’ Mugabe as the party’s candidate and centre of power. It is all about him and he wants the limelight, as described by Machel. The useless conferences by ZANU PF clearly show that they are out of touch with reality and should however take a leaf from their all-weather friends the Chinese Communist Party, who had their congress these past days.

While ZANU is gathering for a special congress to ‘endorse’ Mugabe, the CPC’s congress was highlighting the successes that the party has made since their last congress. The congress report recorded China’s average annual growth rate of over 7 percent, which contributing more than 30 percent on average to world economic growth. Under the CPC leadership, China created more than 13 million new jobs annually for three consecutive years between 2013 and 2016. China Daily also reported that new jobs created in the first 18 months of 2017 stood at 9.74 million are some of the highlights from China.

Since 2013, China has lifted 66 million Chinese people– equivalent to the population of France –out of poverty. They have benefited from the Targeted-Poverty-Alleviation strategy put forward by Chinese President Xi Jinping. Under the strategy, China aims to lift 10 million people out of poverty each year, and is expected to reach the goal of “eliminating poverty in China by 2020. The congress also outlined China’s future development at a new historical starting point and indicates the effects the country’s development will have on the world.  Xi Jinping’s talk of the China Dream should inspire ZANU PF and President Mugabe to lead us to the Zimbabwe dream. A Zimbabwe dream that should in it carries the aspirations of the masses. However, I should to say that in Mugabe he doesn’t have any Zimbabwe dream but a Mugabe dream as he has literally become a life president.

A big lesson for ZANU PF is that congresses are not for rituals to endorse the ‘the ancestor’ but rather an opportunity to articulate strategies and tactics, providing a programmatic and methodological guide for any serious movement that seeks to develop the country. ZANU PF seems lost; theirs is about power, and power to One Man, chastised by Samora as a selfish individual who shouldn’t have been given any leadership role of that magnitude.