Home » Governance » Uhuru Should Stop Getting High On American Supply

Uhuru Should Stop Getting High On American Supply 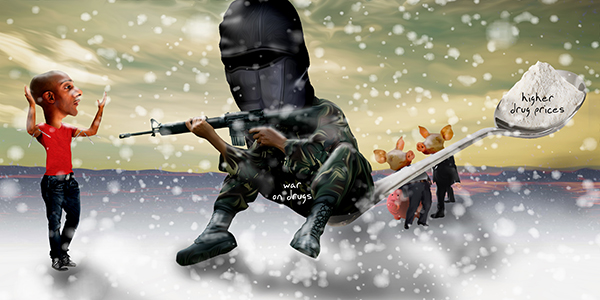 Much has been made about the alleged flooding of the Kenyan coast with illegal drugs. President Uhuru Kenyatta has vowed to stop them and to prosecute all involved in the trade. But like his “war” on alcohol, his stance against illicit drugs is informed less by reasoning and evidence but rather by hysteria.

Kenya is not on the brink of a drugs epidemic. As Kalundi Serumaga puts it in an article in The Elephant’s edition on drugs, “ordinary Africans simply do not have enough numerical strength to make up the necessary aggregated monetary demand, and rich Africans are simply too few to consume the volumes necessary to make fixed supply lines to them worthwhile.”

In fact, across the world, the criminalization of drugs like heroin, cocaine and marijuana has had little to do with public health concerns. Heroin was created at the close of the 19th Century by the German company Bayer, and marketed alongside aspirin as a remedy for coughs, colds and ‘irritation’ in children. Its criminalization in the US, along with opium from which it is manufactured, grew from resentment of Chinese workers and racist hysteria over accounts of white women being lured into opium dens. Cocaine, first isolated in 1859 and marketed as remedy for toothaches in children and as an ingredient in Coca-Cola, was similarly criminalized for due to US whites’ fear of economic competition from freed slaves. The banning of marijuana was a reaction to the influx of low-wage Mexican immigrants in the 1920s, sparked in part by the Mexican revolution.

The rest of the world has blindly followed the US lead with disastrous results. Not only has the drugs war failed to stop, or even significantly slow, their production, trafficking and consumption, it has destroyed countries and communities and made some of the most unscrupulous and ruthless people on the planet fabulously wealthy and immensely powerful.

The specific aim of the war was to destroy and inhibit the international drug trade — making drugs scarcer and costlier, and thus unaffordable. That has only been partially achieved.

Prohibition has prevented some drug abuse by making forbidden substances less readily accessible and vastly more expensive than similar agricultural-based stimulants like coffee or tea but, despite this, the price of most illegal drugs has actually plummeted. The cocaine sold on the streets may be more expensive than coffee but it is much less expensive and much more potent than it was two decades ago.

A small part of this can be attributed to stagnating demand in the West. The 2016 UN World Drugs Report cautiously concluded that “the global cocaine market has … been shrinking,” and attributed this changing consumption patterns. Yet, perversely, it is on the producer and transit countries such as Kenya, that the war on drugs is focused. In fact, it amounts to a transfer of the economic, political, social and environmental costs of prohibition from rich consumer countries to them.

To paraphrase a thought experiment related by Daniel Mejia and Pascual Restrepo in their essay, Why Is Strict Prohibition Collapsing?: “Suppose all cocaine consumption in the US goes to Canada. Would the US authorities be willing to confront drug trafficking networks at the cost of seeing the homicide rate in cities such as Seattle go up by 3000% in order to prevent cocaine shipments from reaching Vancouver? If your answer to this question is ‘perhaps not,’ well… this is exactly what Colombia, Mexico and other Latin American countries have been doing over the past 20 years.”

As their coffers swell up, narco-traffickers are able to corrupt governments and law-enforcement agencies and purchase political power across the global south. In Kenya, at least two County Governors, a Senator as well as members of the National Assembly have been implicated in the drug trade. Further, drug traffickers launder approximately $100 million a year through the country’s financial system, much of which ends up in the country’s real estate, inflating prices and making decent and safe housing unaffordable for the vast majority of the urban population.

By regurgitating the tough talk from the West’s failed war on drugs, President Kenyatta is essentially selling the country down the river. He would be better advised to adopt an approach more informed by the evidence of what has happened in the last century as well as by the interests of the people of Kenya.

A version of this article was first published in The Elephant