Home » Governance » What is Magufuli hiding about Acacia?

What is Magufuli hiding about Acacia? 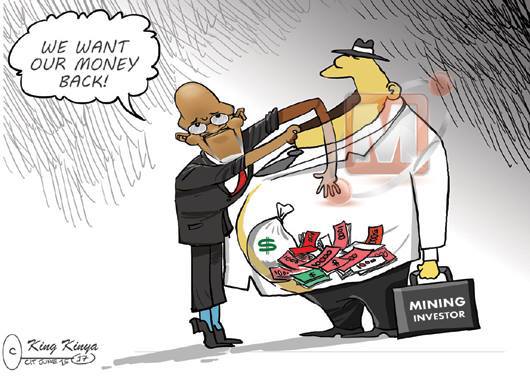 The government of Tanzania is about to start negotiations with Barrick Gold Corporation. With a stake of 63.9 per cent in Acacia Mining PLC, the stakes are high for the Canadian multinational. In March 2017 President Magufuli suspended the shipping of concentrates and subsequently ordered the impounding of its local subsidiary’s export-bound containers.

In line with the ‘Art of War’, the President has publicly taken an offensive approach. This is hardly a strategy of someone who is willing to compromise unless he is bluffing. “I was not crazy”, he recently reiterated in a rally, “when I impounded the containers of…big shots.” They “say it is ‘sand’, he further pointed a finger to them, “but transport it with police escort…there are more than 12 minerals there…they just take.” Isn’t this smuggling?

Acacia is also not budging. In its online note on ‘Unearthing the Truth on the Tanzanian Concentrate Export Ban’, it states: “Acacia is a law-abiding company that has always declared all materials it has produced and paid all royalties and taxes that are due.”

Hence its position on Professors Abdulkarim Mruma and Nehemiah Osoro’s submissions is as critical as it is condescending: “Acacia has also called for an independent review of the recent First and Second Presidential Committee reports that generated, in our view, inaccurate and unexplainable findings and allegations. Acacia strongly refutes these unfounded accusations.”

Playing it safe legally, on 4 July 2017 Acacia announced that Notices of Arbitration were served in Tanzania. Doing so at that time, its press release insists, was necessary to protect it. However, it further noted, “Acacia remains of the view that a negotiated resolution is the preferable outcome to the current disputes and the Company will continue to work to achieve this.”

Such an affirmation from a company that unequivocally dismisses the two presidential reports seems contradictory when one reads its following take on the negotiations that are about to take place:

“The Government of Tanzania has informed Barrick Gold Corporation (“Barrick”) that at this stage it wishes to continue their dialogue, and therefore Acacia will not participate directly in these discussions when they commence. Any potential resolution that might be identified as a result of such discussions will be subject to approval by Acacia, and the Company will work with Barrick as necessary to support such discussions” – Acacia PLC

What these statements mean in their totality is that Acacia is not ready to meet us halfway. Doing so would imply that the President and his committees are right, albeit partially. It would entail that they would have to comply with his demands to bring back our money or minerals.

Casting doubts on the presidential reports is thus one way of dealing with all this. International tax experts have joined the fray. For instance, Maya Forstater and Alexandra Readhead have published an article on ‘A brutal lesson for multinationals: golden tax deals can come back and bite you.’ Therein they inform us that there “are several reasons why the findings of President Magufuli’s committees are hard to believe.” Yet they cite Acacia’s statistics and arguments on why they are confident the two professors got it all wrong as the first reason.

Probably what is more puzzling is that after doing so they present this rhetorical argument that draws heavily from Acacia’s self-defense regarding its integrity and compliance:

“For the committees’ analysis to be true implies an extraordinary conspiracy involving Acacia, its parent company Barrick Gold, the Tanzania Mineral Audit Agency, Acacia’s financial auditors, and independent companies involved in sampling and smelting the concentrate. It suggests that $4bn of additional annual sales have been hidden from shareholders. However, Acacia’s shareholders are not reacting like they have just found out that the company’s management have been defrauding them, nor that the company owns assets that are worth several times more than they thought” – Maya Forstater and Alexandra Readhead.

How does the reaction of shareholders lead these experts to conclude that the “committees’ findings are implausible”? Why did the Executive Chairman of Barrick, Professor John L. Thornton fly all the way to the Julius Nyerere International Airport if this was simply a matter of setting the records straight since our very own professors missed the mark glaringly? The official website of Barrick informs us that at “present, Mr. Thornton holds 2.4 million Barrick common shares, roughly 65 percent of which have been purchased using personal funds (not associated with incentive compensation).” So, how did they measure his reaction?

Nevertheless, some of our own leading experts find their analysis compelling. This is worrying given that they should also read it with the same healthy dose of skepticism that they used when reading the report summaries of the presidential committees. One would expect them to underscore that the article that has been gaining traction since it was published in the prestigious British daily, The Guardian, hardly engage with other Tanzanian sources.

By simply asserting that the Tanzanian President is “accusing the company not only of striking an unbalanced deal but of massively under-reporting its gold exports to evade tax,” the article is missing or dismissing a key argument. Smuggling. When its writers opt to insinuate that “Acacia may not have stolen billions of dollars worth of minerals” without engaging with the possibility of smuggling, they are bypassing a wealth of clues and cues out there.

Let us recall that Professor Osoro’s summary uses the Kiswahili word “magendo”, which means ‘contraband’, when describing the disappearance of containers. The summary does not only provide the shipping number of containers that were shipped without trace, but also the dates of shipping. In total, they were 43 containers that were not accounted for in one year alone.

Does one need an independent committee to even verify this? How many presidential committees since the times of Mwalimu Nyerere were subjected to such verification? As a friend asked, rhetorically, why is it so easy for us to trust researchers other than our own?

One may, by way of proxy, revisit the Controller and Auditor General’s (CAG) reports on the Tanzania Port Authority(TPA) and Tanzania International Container Terminal Services (TICTS) to get a glimpse of why it easy for companies to collude to smuggle stuff inside or outside our country. “We noted”, CAG stated on 28 March 2016, “that TPA does not have controls to monitor total number of containers handled at TICTS.” Why? Because “TPA only relies on information received from TICTS and does not reconcile this with the actual number of containers handled by TICTS.” Moreover:

“Management explained that, TPA has limited access rights of TANCIS which is mostly for TPA Container Terminal. However, despite repeated requests to [Tanzania Revenue Authority] TRA for [Tanzania Customs Integrated System] TANCIS rights extension to cover TICTS Terminal, nothing has been granted to date. This makes it difficult to independently monitor TICTS container throughput submitted by TICTS via daily transfer lists and monthly reports that TPA is forced to rely on. Currently, TPA is following up for access rights from TRA after filling the required forms in December 2015” – National Audit Office

Fast-forwarding to 27 March 2017, one notes CAG reiterating that TPA “should collect data from TANCIS showing all containers handled at TICTS and reconcile this information with actual containers received at TICTS.” Now, if such was the state of importation, why should we expect that the conditions for exportation did not have a room for smuggling our minerals?

Reducing the issue to tax deals or evasion can thus be misleading. “We have tax experts – good ones”, President Magufuli indeed points out. “But”, he firmly stresses, “they were just allowing the containers to be carried away after being given a bit of money.” Maybe the President should just share the committees’ reports publicly in their entirety.