Home » Democracy » Zambia militarises its police force ahead of 2021 polls

Zambia militarises its police force ahead of 2021 polls 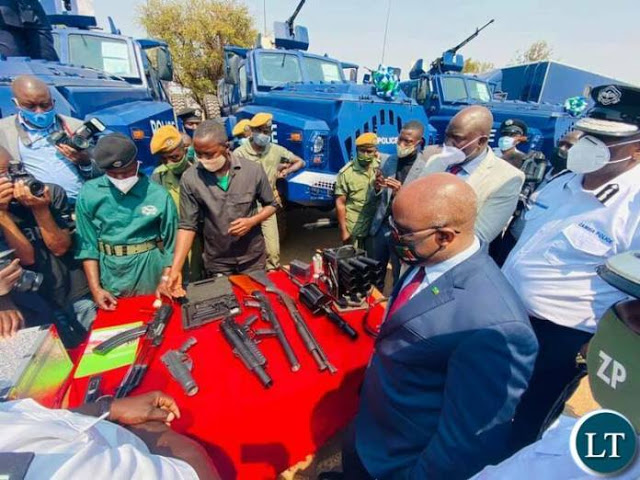 WHILST the country is grappling with the novel Corona Virus 2019 pandemic with cases spiralling out of control and community deaths increasing exponentially, Zambia’s political leadership continues to prioritise actions aimed at securing their continued stay in office.

The Zambian government has taken a hard stand against opposition parties’ mobilisation and continued to increase its capacity to quell public meetings, protests, riots including peaceful assemblies.

Recently Zambian youths aggrieved with the poor state of the economy and increasing corruption notified the police of their intention to hold peaceful public protests. The police denied them security and deployed hundreds of police officers and ant-riot gear across Lusaka to stop them. However, the youth outmanoeuvred the police and held a protest in the bush and streamed it live on their social media platforms.

News of Zambia’s vice President testing positive for COVID-19 was overshadowed by a colourful handover of military equipment to the Zambia Police Service. Since President Lungu ascended to power in 2015 he has invested significantly in arming the police. In 2016 the Zambia Police acquired 3 Marauders for the Paramilitary Unit and 15 Mavericks for general policing. The armoured vehicles were fully equipped to quell any volatile situation.

In January 2015, the Government announced that it had purchased three choppers for the Zambia Police Service to improve operations.

The latest offering unveiled on the 19th of August, 2020 consisted of various modern anti-riot equipment in order to allow officers to deal with any situation to maintain law and order.

Speaking at the Handover ceremony held at Lilayi Police Training College, Home Affairs Minister Hon Stephen Kampyongo said that only criminal-minded elements should be worried that the government has procured such equipment adding that this should instead make peace-loving Zambians happy.

“We will not be derailed by armchair critics who are hell-bent on condemning every piece of development that President Edgar Chagwa Lungu and his Government initiates in National interest because for us as Home Affairs the Peace and security of this nation is supreme” Hon Kampyongo said.

Hon Kampyongo said that Government will continue to equip and modernize the police service to capacitate them enough to deal with any situation in a quest to preserve peace and security.

And on his part Inspector General of Police Kakoma Kanganja has thanked Government and President Edgar Lungu for their continued support to the police service.

Mr Kanganja pledged to reciprocate the government’s commitment by ensuring that law and order prevail during and after the 2021 Presidential and general elections.

This continued arming of the police has worried stakeholders. The new outfits were procured at an undisclosed value and call for the value to be disclosed have fallen on deaf ears. The opposition Patriots for Economic Progress wondered why the government was spending money on used armoured vehicles whose life cannot be determined arguing that it was a waste of public funds.

Zambia prepares to go for General Elections on 12th August 2021 to elect the president, members of the national...

Nobody will be surprised to read that journalism leans toward sensationalism in terms of topics chosen for coverage, how...