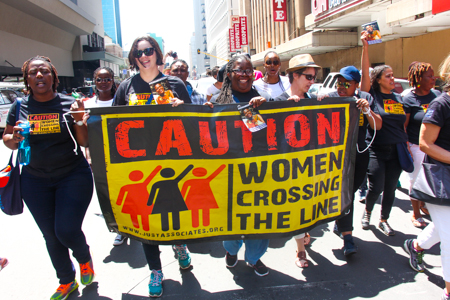 Their violet T-shirts match the jacarandas – in full spring bloom – as the protesters make their way through downtown Johannesburg in remembrance of Fezekile ‘Khwezi’ Ntsukela Kuzwayo who bravely brought forward a charge of rape in 2005 against Jacob Zuma (who became the South African President in 2009), and died towards the end of last year aged 41.

As they sing and dance, they also move through the streets with a range of messages boldly stated on placards and posters. One reads, ‘Reclaim Her identity. Reclaim Her Dignity’, while another states, ‘We Support the Fight for Free Decolonised Education’. Yet another reads, ‘We Honour All Women & Queer Bodies in the Fees Must Fall Movement’.

Rooted in building trust and exploring commonalities, the convenings ensured that the participants developed relationships with a broad range of movements activists’ from a feminist perspective – on women’s leadership and experiences in a range of struggles, understanding the power of solidarity and collective strategising and action, and deepen understandings of the links between seemingly disparate issues facing women and the opportunities thereof for solidarity.

While not an official part of the programme, the march in remembrance of Khwezi, brought to consciousness many of the underlying and persistent challenges that women continue to face in claiming their bodily autonomy, power and safety. During the protest, a Bible wielding man began to follow, shouting words of homophobic and sexist dissent. The police, who were escorting the march, eventually intervened and soon, the procession was on its way again.

In multiple ways, the convenings surfaced the very real dangers and pushback that women continually face in challenging patriarchal power. And the dilemma of the contradicting compromises they often have to make in fighting for their rights with the protection of the very same systems – from patriarchal cultural norms to the state and funding partners – that tend to compromise them. From these observations, what also became clear was that there was need for ongoing reflection on what cohesive and effective movement building – and solidarity – would look like amid such challenges and contradictions.

The role of patriarchal power

Inherent within conversations around solidarity, movement-building and activism, was the role of power, particularly patriarchal power. Power, here, was seen as intersectional, fluid and dynamic: with visible power more formal (and manifested through more overt systems such as policies) than hidden power which is subtler in exerting pressure on formal power structures. A focus on invisible power was seen as key given that the norms, attitudes and beliefs of societies are a direct inhibitor of freedoms for women.

Discussion on how patriarchal power shifts and morphs in reaction to feminist activism was unpacked, with examples of how messaging – for instance with the language of ‘engaging men as partners’ used within the #HeForShe movement, or through the depoliticisation and cooptation of feminism into commercialism – continues to shift and potentially take away space for critique.

The dangers of privilege – by race, class and sexual identity – were also noted as potential hindrances to such organising if left unaddressed and unchallenged. To this end, the effectiveness of alternative forms of organising were discussed as being premised upon openness to uncomfortable but necessary conversations and a re-imagining of what is meant by phrases such as ‘safe spaces’, as these should not only be safe for external critique and analysis, but also be inward looking.

In situating women’s organising within a global context, it was generally agreed that this is a critical moment across the world with intersecting inequalities – race, gender, sexual identity and class – on the rise.

As one participant put it, “How do we cultivate a shared politics so that divide and conquer cannot happen as easily to us?”

Major discussion points around the closing space for civil society arose, with some areas of constant concern being funding, institutionalisation and the politics of power therein. Language use and co-optation into externally driven agendas, as well as unfinanced demands for evidence and baseline findings before grants are allocated, were seen a key challenges.

Participants identified a lack of financial support for organic organising by women to meet practical and strategic demands, and how funding for depoliticised activities – which often do not espouse a feminist consciousness – is often more accessible. This brought into discussion whether, and how, organising could continue – and sustain – without monetary funding. Lack of financial resources was thus seen as an opportunity for potentially unconventional and creative collaborations, as opposed to a complete impediment to organising, with non- judgement and the cultivation of safe and responsive spaces key tenets of such alternatives.

Through this lens, organising outside of institutions was seen as being potentially liberating, as it could afford activists and allies the chance to work without the pressures of proposal writing and reportable deliverables being foremost in their minds.

Challenges of alliances and transformative networks

The need for broad-based allies and alliances across movements, with a shared set of principles was consistently emphasised.

“There are LGBTI organisations that are anti-sex work, and there are ‘feminists’ who are anti- LGBTI,” reflected one participant. Fear of being seen to be in solidarity with a cause that might be seen as ‘radical’, or put one at personal risk in particularly conservative environments, was discussed as an impediment to solidarity-building.

With the majority of systems of power across Southern Africa favouring conservatism – along religious, political and social lines – the convenings brought forward the very real challenges of building effective cross movements within a context where those who might be considered allies might not support a cause, or be willing to deal with the consequences of being associated with it. Furthermore, building consensus around a single issue to pursue across various interest groups and causes was acknowledged as being challenging; often leading to intra-movement tensions.

One of the strategies brought forward as a means to navigate these tensions and splintering, was the necessity of building engaged networks, which aren’t necessarily institutional or formal. It was raised that some alliances or coalitions are funder-driven and therefore more effective superficially. The idea here was that in some instances, transformative alliances – those that are more reflective of the structures that impede effective solidarity building – may be more effectively built through partnerships with individuals within organisations and institutions, rather than with the organisations and institutions themselves. Various examples of such allies were given, including representatives of international NGOs, local chiefdoms, religious groups and the media.

Successful organising is a continuous process

As part of the Harare (Zimbabwe) dialogue, participants developed a timeline of women’s organising which highlighted key political, economic and cultural events that had informed Zimbabwe’s feminist terrain since the nation’s 1980 independence. What became patently clear from this process were the ebbs and flows in power dynamics and how pushback against gains has operated to continually set back women’s rights.

The effort was spearheaded in large part by the National Constitutional Assembly (NCA) and the Women’s Coalition of Zimbabwe (WCoZ), who sensitised women to the gendered flaws of the new constitution and the rights they were universally entitled to. But while it was a victory for organising, it would still take a considerable amount of time for Zimbabwe – and Zimbabwe’s women – to get a constitution closer to their needs and aspirations. While there was great power in women consolidating their numbers to affect policy, there was need – beyond this moment – for incremental efforts towards finally achieving the greater goal.

What the activity underscored was the importance of cross-generational knowledge building and sharing to strengthen strategy and organising agendas.

Perspectives from youth-led movements such as Fees Must Fall were shared as well as those from movements engaged in activism against extractivism. These further brought into focus the role of state power in propounding militarism and securitization, for example through using private security (indirectly financed by citizens’ funds through government) and the police as buffers of the state during protests. The complicity of government officials with corporates, and in violent actions against protests around environmental degradation, were also discussed.

Successful organising was therefore situated as a continuous process, as opposed to a destination, providing time and space for introspection, reflection and re-invigoration.

Alternative and creative modes of organising – using humour or arts and culture – were also discussed as important conduits for success in feminist activism.

The convenings were a first level of conversation, and provided space for reflections and an opportunity to map the key actors at play in the region that contribute to increased inequalities. Broad principles and strategies for cross-movement engagement were identified and explored, which provided a foundation for moving forward.

What the dialogues brought to attention was the constant need for reflection, evaluation and articulation of important shifts taking place globally and locally. They also provided a safe space for release and strategising for the feminist future.