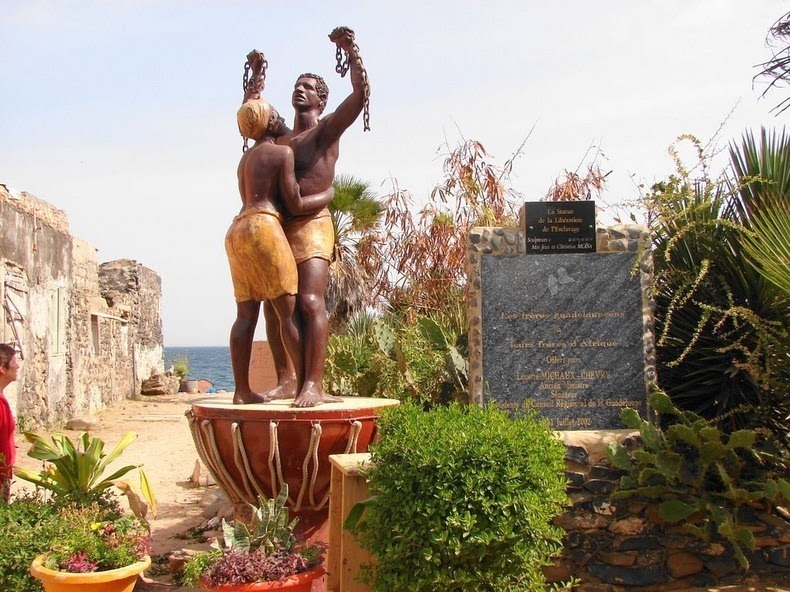 Visiting Goree Island in Senegal did not turn out to be as eerie as I had initially anticipated. And I wasn’t going to have an Obama picturesque moment of looking austerely toward the open Atlantic ocean. Or trying to find the deepest of meaning from it. But approaching the island on the hourly ferry from the coastal city of Dakar, past the ocean freight tankers, and in the midst of relaxed Goree island residents, there was always going to be a significant pause for thought, pained emotion and a sense of liberation.

Thought in the realization that you were approaching a symbol of global inhumanity and injustice as led by the capitalism of human flesh in the 16th through to the 19th century.

Pain at what the island now means in contemporary African historical and political consciousness. Liberation in the sense that for you to even be able to visit this island, emblematic as it is of the Trans-Atlantic Slave Trade in which millions of African lives were lost or forcibly displaced, it means that as Africans we conquered the evil that it was.

Not just by way of the religious Abolitionist Movement but by way of our struggles against mercantile capitalism, colonialism and neo-colonialism.

In this regard, a visit to Goree Island, at least a first one for me, is a rite of African passage. Especially as one recalls the haemorrhagic human and economic effect of the Atlantic slave trade on the African west coast. (The same is true for the Arab Slave trade on the East African coast though to lesser recorded impact).

Meeting with African bloggers and thinkers on the island was without doubt a reclamation of the spirit of liberation. Amid serious discourse as to the state of freedom of expression on the continent, the tour of the island was always going to be a grim reminder of Africa’s peripheral placement in global economics and the commodification of the human body. Both historically and in the contemporary.

I mention contemporary because during the week of our visit to the island, the BBC broke a story about a ‘new’ slave trade in Libya. It is a story that outlines the auctioning of black African migrants from countries in or close to the Sahel region such as Ethiopia, Gambia, Sudan, Mali and Nigeria. And the debate has been raging as to who is to blame for this contemporary trade in African bodies. A recent Al Jazeera programme ‘The Stream’ showed the glaring differences of opinion on the matter.

Commentary has ranged from blaming African governments for not creating economic environments where their citizens chose to stay as opposed to attempting the dangerous journey to Europe via Libya. Other opinion points to the fact of the liberal intervention in Libya by the North Atlantic Treaty Organisation (NATO) that has led to porous borders and political instability in the Sahel.

All of these arguments validated as they may be by their propagators, do not take away the tragic fact of the dehumanisation of the African body. Not only by way of its commodification but also the clear historical inference of what can be done to it via the memory of the slave trade.
And its not just the memory of us Africans as former victims but also the memory of those that would be the perpetrators.

The latter seeking to reinforce what should be a perception of the past, that is the wrong assumption that black Africans can be traded like animals. Such a throwback represents the worst of contemporary race relations between Africans in the north and those south of the Sahara. At the same time, given the fact that those that are being subjected to this inhuman and degrading treatment are intending to travel to where they are not wanted, the Global North cannot escape complicity in the current state of affairs.

The new found anti-immigrant groups and parties of the industrialised world perpetuate not only inherently racist attitudes toward people of colour but even more significantly cloud over the global injustice that was the slave trade. A trade that in part led their countries to arrive at the state of development that they so jealously guard.

Leaving Goree Island was equally a moment of reflection as had been arriving. Knowing that this was not the only slave outpost island on the west or even the east coasts of the continent but also that here has been a muted but ever existent sentiment and call for reparations gives one hope of redress for an historical injustice. Knowing too that there are still contemporary actors that want to pursue this trade in Libya (and elsewhere) means the struggle against slavery is not over. Both by way of its real occurrence as well as racist perceptions of black bodies and black people.