Home » Human Rights » Kasai region in DRC, a tale of war and death caused by malnutrition

Kasai region in DRC, a tale of war and death caused by malnutrition 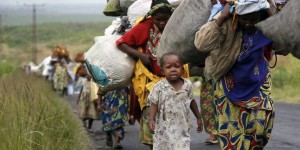 In the Kasai region, the war between the army and the Kamwina Nsapu militia has left a real humanitarian tragedy. But a tragedy forgotten by the international community. In addition to many mass graves and tens of thousands of displaced people, many are homeless and severely malnourished. UNICEF estimates that more than 400 000 children are severely malnourished. In Kasai Oriental, peace has returned, but the effects of this war are still visible. This is the case in Miketa village in Miabi territory southwest of Mbujimayi city.

Saturday, April 28, 2018. Accompanied by three journalists from Channel 4 News, we leave Mbujimayi to discover the areas formerly under the control of the terrible Kamwina Nsapu militia. In this region, many localities were hit by the violence of the army and militia. This is the case of the territories of Tshilenge, Kabeya Kamwanga and Miabi in Kasaï-Oriental. We chose to go to Miabi, territory where villages like Tshijiba, Tshilunde, Mwanza Lomba, Miketa … experienced the pangs of the war.

On our way, what we see is distressing. The cameraman asks the driver to slow down our jeep or stop to take pictures: in front of us, extremely poor people who are sorely lacking food. Yet we could see large areas of uncultivated arable land. But how could they cultivate when the bush was infested at the time by militia and soldiers? A shopkeeper explains: “In all these villages, people were killed by bullets or slaughtered, others were wounded with machetes or knives. And everyone is afraid to go to the fields. No one dares venture to expose his life to the danger of fetching foodstuffs from the places of production.”

The Channel 4 News journalist are very surprised to see men and women pushing tons of loads on bicycle along this dirt road, under blazing sun and over hills. Here the bike is the means of transport of the poor. Others, especially women, bear their burdens on their heads.

We had to travel about 80 km from Mbujimayi to reach the village of Miketa by a track literally covered with bush and tall grass. When we arrived in this village, we were greeted by songs and dances of the small local population. Thé women shouts of joy pierced the air to the sky. Other women threw their loincloths on the floor so we could walk on it. I do not know if this warm welcome was spontaneous or prepared.
Because before coming, we warned the authorities, including the governor of Kasai Oriental province, Alphonse Ngoyi Kasanji, for security arrangements. We were afraid of falling into ambushes. Not far from this area, not long ago in Kasaï-Central, two UN experts, the American Michael Sharp and the Swedish Zaida Catalan, but also their Congolese escorts, were savagely killed. Investigations to determine the culprits have not been successful. They had dared to go to areas of clashes between Kamwina Nsapu and the security forces.

Channel 4 News journalists are very moved by the level of misery of local people. They took a lot of pictures. But the population had another understanding of things, they thought that these White men were humanitarians who came to help them, especially with food. I had to tell them in Tshiluba the local language: “These whites men are not humanitarians. They do not have food to give you. They are journalists who come to sympathize with your misfortunes to talk about it to the world.” My message was not recieved. Women and children looked at me strangely, because they were hoping for something.

According to the UN, this war in the Kasai region is one of the worst humanitarian crises in the world today. More than one million displaced persons, some of whom have fled to Angola. At least 80 mass graves, schools and hospitals destroyed, precariousness, undernourishment, malnutrition.

Here in Miketa, many villagers who had taken refuge in the forest have returned, but life is very hard to rebuild, because all their property was destroyed during the war. They are trying to rebuild their burned or destroyed huts. Some have started fieldwork again. Others still live in host families. Not easy to turn the page Kamwina Nsapu

A few months ago, the Mbujimayi – Miabi road to the village of Miketa was unusable because of the presence of the militia who sowed terror and desolation. Today you can travel safely. Peace is restored, the displaced return and try to reorganize their lives in the villages. A difficult bet because of their extreme poverty. “This village of Miketa was one of the red zones of the Kamwina Nsapu rebellion. There were up to 700 militiamen here who terrorized the population. Among them many children … “, says a local chief.

The war did not only displaced people. It changed the normal course of life of the villagers. Everything has to be done again. Children are suffering from acute malnutrition. They do not go to school. Many of them are without clothes, just patched breeches, naked torsos, no shoes, paunchy stomachs. No cover to protect from the cold. Villagers lack everything and need emergency humanitarian assistance. The arable land is no longer fertile enough in this area. Corn, a staple in the region, no longer grows as before. “We grow corn here, but the yield is very low. Sometimes we have to go and buy corn in Mbujimayi. It is very expensive there: 3000-4000 Congolese francs (about 2.5 $) per measure. We suffer to find food here”, explains a former displaced father of nine children.

Returned people hope for help from government and NGOs
Mulumba is one of the displaced who returned to the village of Miketa. He tells what happened during the war. “Kamwina Nsapu militiamen came in large numbers and entered the village after crossing the Lubi River on the other side. They came from the province of Kasai-Central. We fled and found refuge in the bush. Behind us, these militiamen set fire to our homes and looted our plantations and crops. May the government and the people of good will help us as soon as possible, otherwise they will only count the dead here!”

Among the displaced, also back in the village of Miketa, is 39-year-old woman, Madeleine Mujinga. She also remembers the attack on the village by the Kamwina Nsapu: “It was my first time to live a war. I ran with my husband and my three children. We stayed for almost six months in the forest. From December 2016 to May 2017. We slept under trees and ate field grasses. Today we have returned to the village, but we have no means. No food. We are trying to rebuild our homes, but it is difficult because we are hungry.”

I will never forget this pitiful scene of a 12-year-old girl running behind our vehicle, her hand outstretched and asking for food. I did not know that the world is so unfair: a world where some eat a lot of food and throw the rest in the trash; and a world where poor innocent children can not even afford one meal every three days!

The humanitarian crisis in the Kasai region is more serious than it is. Unfortunately, the Congolese government believes that the international community caricature this crisis by magnifying it to dirty the image of the country. Many of the displaced have been shocked to learn that the government has even refused to participate in the UN conference in Geneva on April 13 to raise funds to help 13 million people hard hit by the crisis in the DRC. A displaced woman explodes with anger: “Since the beginning of this war, the government has not brought us anything for assistance. It is malnutrition that is killing us here. Why prevent the international community from helping us? What kiné of government it is? “

During the attack on Miabi’s territory, the territory’s administrator also had to seek refuge far from his entity. He testified, “The situation was serious in this part of the province. We had to momentarily retreat in the face of the advance of the militia, the time to organize ourselves to fight back and restore peace. And thanks to the determination of our Governor Ngoyi Kasanji, we have restored peace and public order. “

In short, after their return to their living environment, the displaced face the weather and lack of food. Children are the most affected because of malnutrition. Everyone hopes that the humanitarian aid, from funds raised during the last Geneva conference on the humanitarian crisis in the DRC, will also reach these malnourished children of the village of Miketa in Kasai Oriental.