Uganda: 4 years on, no justice as NGO office break-ins escalate 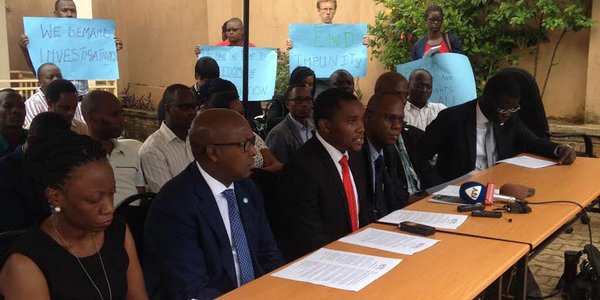 Many governments around the world are settling for repressive NGO laws to control independent groups. In Uganda, the government is taking it a step further – overtly condone break-ins at their offices and sanction a violent raid at a lawful, peaceful Pride event.

In the past four years, more than 30 office break-ins have been documented. A systemic pattern of attacks targeting legitimate work of organisations is worsening as perpetrators, with impunity, continue to remain at large.

What makes these break-ins very concerning is the fact that the attackers have repeatedly targeted organisation documents and other confidential information of no ordinary financial gain. In a few isolated cases did they make away with other material items such as laptops, cameras, and computers – which also contain sensitive information about organisations and their clients.

The break-ins have also been bloody.

During the recent break-in at the offices of the Human Rights Awareness and Promotion Forum, a legal aid charity working with sexual minorities on May 22, 2016, Emmanuel Arituha, a security guard, was beaten to death by attackers. The horrific images were captured on camera – including the faces of the assailants.

This was by no means a first. Way back in July 2015, another private security guard was also murdered in cold blood at an organisation’s premises.

On April 10, 2016, a security guard at Human Rights Network for Journalists narrowly escaped death after he (luckily) succumbed to a set up of eating food containing sedatives in an attempt to get him out of the way for the assailants to break-in into the premises.

We can go on and on recounting the incidents until the cows come home.

Despite of all these incidents being timely reported at respective police stations and police officers visiting the crime scene to conduct interviews and collect evidence in several incidences, no case has ever been conclusively handled to bring perpetrators to book.

Four years on in a number of investigations, not even CCTV footage revealing facial identity and fresh blood samples at some of the crime scenes has been sufficient to enable the police conclude investigations leading to successful prosecutions or release of investigation reports.

The 2014 Committee of eight police officers set up by the Inspector General of Police to investigate break-ins in 2014 has equally never released any report. In a sharp contrast, a committee established to investigate operations of the Great Lakes Institute for Strategic Studies, a civil society group for alleged partisan activities released a report in weeks.

The system is apparently quick to investigate legitimate activities of independent groups but inert in investigating violent threats against groups.

On June 13, 2016, I delivered a petition from 31 Ugandan and international organizations to the Inspector General of Police. Specifically, the groups inquired to know the findings of the 2014 committee or any actions thereof, specific progress on investigations in the three recent break-ins, and finally, what the police force is doing to effectively protect human rights defenders from further acts of violence.

To date, no response has been issued.

In the petition, the organizations noted,

“the lack of accountability and persistent impunity for attacks on human rights defenders and their offices sends a message that such attacks are condoned and tolerated by the authorities.”

Nothing could be further from the truth.

However, you cannot rule out the possibility that some of these break-ins are acts of common criminality. But how do you arrive at this conclusion when you have a police force that has ignored calls to get to the bottom of the attacks?

Today, installing CCTV cameras and hiring armed private security guards does little to avert a targeted attack. Equally, having footage of the break-in and reporting the crime to police is no guarantee that all will be done to bring the assailants to justice.

Such a situation cannot continue obtaining.

The Police and the Director of Public Prosecutions must take decisive action to bring closure to these cases. Continuing to ignore doing so is tacit approval of the attacks.