Home » Freedom of Expression » Winnie Mandela: The Product of Her Enemies

Winnie Mandela: The Product of Her Enemies 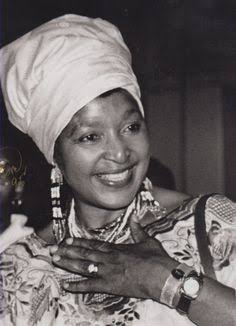 It has been a longer walk to freedom for Winnie Mandela. Even as she rests from her struggles, the walk continues. This time among those who follow in her footsteps in fighting Global Apartheid.

Yet there are those who feel she is not worthy of emulation let alone adulation. Like the friends of the black people that Ossie Davis referred to in the ‘Malcolm X Eulogy’, they consider it their duty to tell us to revile her. To flee, even from the presence of her memory. And to save ourselves by writing her out of the her/history of our turbulent times. As if Winnie was/is merely a footnote in it.

They think they know better than Stompie Seipei’s mother, Mananki Joyce Seipei. Or feel more pain than this mother who feels she does not have enough details to blame or convict Winnie for the murder of her dear son in the bloody decade of the 1980s.

Winnie was not a saint. Hardly anyone would be so in the turbulent times that defined Apartheid South Africa. Not even the Black Pimpernel who later became the Messianic face of ‘A Rainbow Nation’. Or even the Bishop who won a Nobel Peace Prize.

Frantz Fanon sheds light on how, in the process of violent decolonization, ‘angels’ and ‘demons’ are made. “All those saints who have turned the other cheek, who have forgiven trespasses against them, and who have been spat on and insulted without shrinking”, he notes, “are studied and held up as examples.”

On the other hand, those who are more critical are “gradually isolated, and then quite simply brushed aside.” In the case where they cannot simply be ignored due to their touch with the masses, they get eliminated. This is what happened to Chris Hani who was assassinated on this date 25 years ago in South Africa.

Mam’ Winnie could not easily be isolated or brushed aside. I was a student in South Africa in 2001 when the then leader of the African National Congress (ANC) pushed her in public during the 25th anniversary of the Soweto Uprising. Yet in 2007 she got more votes than all ANC leaders in its National Executive Committee (NEC) voting in Polokwane. She remained a political force to reckon with.

Some of us would even invoke the counterfactual to grasp what could have been. Were it not for misogyny, she would have been the President of both the ANC and the Republic of South Africa. And who could better serve in those capacities that the one whom Graça Machel has referred to as her “Big Sister” who “loved our people unconditionally and sacrificed so much for our freedom.”

A holier-than-thou attitude should not stop us from remembering that love from someone who is on the record for stating that she is the product of the masses of South Africa. Someone who was bold and honest enough to acknowledge that she was also the product of her enemies. The product of the violent legacy that made her biographer, Anne Marie du Preez Bezdrop, make this painful observation:

“Some years ago, I saw photographs of Winnie Mandela in a magazine, and noticed that as a young woman she had lively, laughing eyes – the soulful, striking eyes many observers commented on. However, in later pictures, her eyes were mute, as if the light in them had been extinguished. That set me wondering what hardships had caused such a woeful metamorphoses.”

Fare-thee-well Mam’ Winnie. You have played your part. May we.