African Women in Media: In Conversation With Fatuma Abdulahi 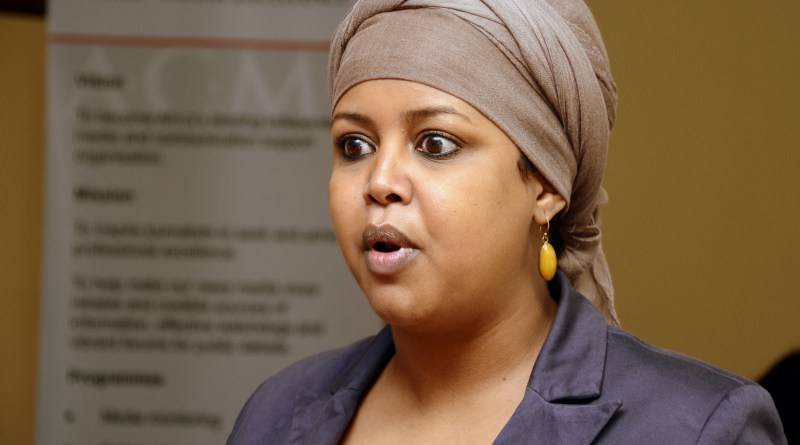 Fatuma Abdulahi is a Somali journalist whose family left their home country in the early 90s following the instability after the collapse of the Siad Barre government. Abdulahi returned to the continent, working first in Sierra Leone. She has been here for eight years, choosing to stay because this is “the place that I belong to”. She was named one of 25 Africans to Watch by the Financial Times.

Based in Mogadishu, Abdulahi is the founder of  Warya Post, the first woman-owned media publication in Somalia. She was in Uganda on invitation from African Center for Media Excellence to deliver a lecture on media and politics. Rebecca Rwakabukoza caught up with her to talk feminism, Somalia and reporting on women.

RR: What is the place of women’s pages in media? And what can we do to disrupt the landscape?

FA: I hate that they exist. There are no men’s pages. I can understand the need for the space because there is need. But if we need women-specific space in media, then we have failed.

The goal is not to need them.

RR: What is the acceptance and participation of women online in Somalia? And how do women view online activism?

FA: Women are very active online. They are almost non-existent in traditional media. There, they are mostly young reporters and not owners nor managers. So a lot of them have found the freedom to express themselves online. Without social media, there wouldn’t be as many women photographers and content producers. And they are doing amazing work. Before, the only image you would find of Somalia was a starving woman with sixteen children. Right now there are several incredible images of the country.

A lot of them do not label themselves as activists or even as feminists. They just want to produce good content.

RR: Do you identify as feminist?

RR: Where do you think you get it? Your father? Living abroad? Your work?

FA : I learnt everything from my father. My mother having passed away while I was young, I grew up in Somalia with my father who was living with a physical disability. I learned a lot about isolation and social exclusion. I was very aware of social attitudes towards gender, abilities and age.

We lived in a place with 9-10 rooms and in each room, there was a family. Ours had about four of us in there. I remember my uncle- my father’s cousin- used to beat his wife. She was very very beautiful, and was pregnant. My father always intervened. Another uncle had only girls and complained about the wife giving birth to only girls and I remember my father telling him it was not the wife’s fault but his. It was the sperm that contributed the determining chromosome.

I definitely get it from my father.

RR: How do you deal with online harassment?

FA: I fight back. I don’t play safe with my opinions so I get a lot of backlash online. This is understandable since the internet is a very loud space.

I have also come to decide that there are those conversations online that are worth engaging with and those that are below engagement. There are people where you cut back and count your losses. And then there are people with whom you can engage and still may disagree- respectfully and having had a good discussion.

RR: You mentioned that you had suggested a women’s programme to the BBC and they rejected it. Did they give a reason?

FA: This was 2003 and the BBC World Service had four broadcast programmes in African languages: Somali, Hausa, Kinyarwanda and Kiswahili. I was working with the Somali Service and the Somali Service did not have a women’s program.

At the time, the role of women in Somalia was changing radically. Usually, the men are outside the home earning while the women stay within the household. But the rules had changed with the men dying during the war and others leaving the country for their safety, so women had to get out and do the earning.

When I brought it up at an editorial meeting, they laughed. To give you a picture of the meeting as well, majority were old men. There were only two women at the time. The suggestion was dismissed with a “Sorry. It won’t happen.” It is one of the reasons I left. There was no room for growth with everyone comfortable doing the same old things, and just waiting for retirement.

RR: During your breakfast meeting with Ugandan women in media, you spoke about the old Somali way of dressing. You said “I will stick with the old way. If it costs me, it will cost me.” If the old ways are more woman-positive, can going back work? How do we work that into progress?

FA: There is a lot of misunderstanding about the old. I believe in change, quite deeply. When it comes to dresscode in Somalia, there are two groups: the camp that is for Arabic dress and the one that wants to go back to Somali dress. I cannot think of any other answer than to go back to the Somali traditional way of dressing.

This is not about going forward or going backward. And sometimes when people speak against going back, they say “we are not in the dark ages.” This is just reclaiming of what is Somali. Not that tent. By the way if I was to choose my way, it would be my miniskirt. Choosing Somali tradition however, for us right now, is more realistic.

This interview was first published by Her Zimbabwe.