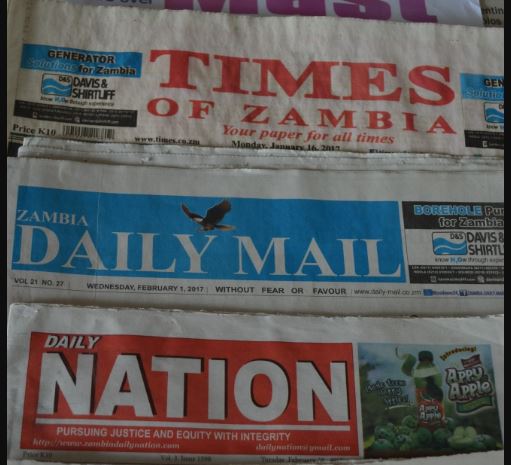 The Zambian government has announced plans to create a consolidated media and newspaper publishing company under the Industrial Development Corporation (IDC) Group. The shocking move announced towards the end of December 2019 is unstrategic given Zambia’s severely constrained fiscal position.

The first step was taken when the IDC dissolved the Times Printpak Board of Directors and handed over the management of the company to Zambia Daily Mail leaving only the editorial team to manage content at the broke parastatal which is haunted by massive debt and liabilities.

The state-controlled Times Printpak Limited the Publishers of the Times of Zambia and Sunday Times of Zambia has growing outstanding statutory liabilities with workers not receiving regular monthly salaries, in some cases up to 11 months in arrears.

During the first nine months of 2019, Times Printpak recorded an operating loss of K41.7 million (about USD 3 Million) and had a return on assets (ROA) of -49 per cent.

The IDC has directed that the Zambia Daily Mail Limited Board of Directors oversee the affairs of both companies effectively appointing Nebat Mbewe – Zambia Daily Mail Managing Director to oversee both newspapers in an acting capacity.

In a recent statement, IDC Group Chief Executive Officer Mateyo Kaluba said the IDC has been concerned with the continued deteriorating financial situation at Times Printpak Zambia Limited, which had rendered the company unable to meet its key obligations as they fall due.

He announced that the first phase involved recapitalising the business to ensure it has the resources to undertake emergency reforms, making changes at board and management level as well as liquidating all unpaid salary arrears owed to the workers.

Kaluba argued that the model of consolidating media and newspaper assets was not unique to the IDC. This assertion can, however, be rebutted from various angles and may need to be explained further to convince Zambians that it’s the viable way out.

He also claimed that the model had proved successful around the world in optimising the value of media companies by creating synergies, eliminating duplications, reorienting resources to growing the business and delivering profits.

However, whilst it is commendable to see the government take practical steps to address the deteriorating situation at Times Printpak, the merging of the two-state newspapers needs to be properly handled or else the state risks losing Zambia Daily Mail as well.

The government must clearly state why it is so reluctant to hive off the loss-making newspapers and let the private sector do the business since, in their current propaganda state, they are not useful to the public and continue to be unattractive to advertisers. Moreover, the government is in a severely constrained fiscal position and may not have the financial muscle to run this new outfit. Will the management of the Zambia Daily Mail run two newspapers with the same resources and on the same conditions of service, or that it is a case of transferring the burden of Times of Zambia to Zambia Daily Mail?  The big question of the day is: What business does the State have in running newspapers; especially that online media is increasingly taking the central stage on the dissemination of news world over?

Another important implication is on government advertising which might be concentrated on the state media to the disadvantage of the other players in the media industry. The government will through this measure continue to control editorial content for the newspapers thus further entrenching a culture of biased reportage, propaganda which continues to be detrimental to the advancement of professional and fearless journalism. This is bad for good governance and presents a dent to the country’s democratic credentials.