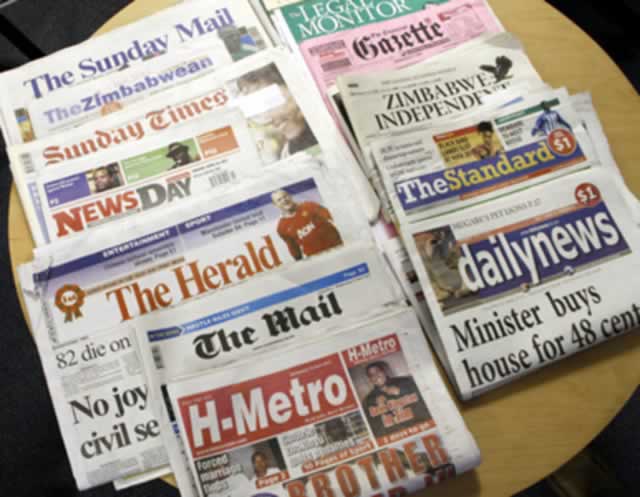 The Zimbabwe Broadcasting Corporation (ZBC) recently issued a statement on its coverage of political parties during the current campaign period of Zimbabwe’s 2018 harmonised election.  This was after opposition political parties decried the high costs that the state broadcaster is charging for campaign adverts on its single television station and multiple radio stations.

As is its norm, ZBC went on the defensive and claimed that it had complied with the electoral laws and Zimbabwe Electoral Commission’s (ZEC) media regulations.  It also added that it had offered political parties advertising airtime which if they do not take up, that is pay for, will be forfeited. With the added odd statement of how the same airtime ‘cannot be banked’. This is probably to mean that if any of the opposition parties manage to get the money to flight adverts they cannot get the allotted airtime in retrospect.

The Ministry of Media, Information and Broadcasting Services (MIBS) permanent secretary and presidential spokespersons George Charamba weighed in to support the ZBC.  He was reported as derisively saying that the ruling Zanu PF party was paying for its own adverts while the opposition was failing to put up posters.

And it would appear that should be end of the argument.  In reality it should be the beginning of it.  This is because the problems at ZBC and this election’s coverage are editorial as opposed to ‘advertorial’.

While as it claims, ZBC can have one or two prime time talk shows about meeting specific candidates or increased portions of electoral coverage on its 8pm main news bulletin, its coverage of the election in and of itself has been woefully inadequate.  Both for its singular television station and for all of its radio stations.

From an editorial perspective and point of view, the state broadcaster is still evidently biased in favour of the ruling Zanu PF party.  While it may deny this, the proof remains in the pudding.  News content and the live broadcasts of rallies/ meetings are heavily in favour of the ruling party.  While ZBC may claim that the opposition parties do not give them schedules of meetings, this is not a valid enough reasons for its reporters and editorial team to find these rallies in order to allow the public to know what the opposition is up to.  Or at least saying.

Nor is there rolling news coverage of the electoral campaigns either on TV or radio.  That is to say, news coverage that seeks to regularly and in real time update Zimbabweans on what candidates, parties are up to.  Not as pre-recorded programmes, but live ones.  From any corner of the country and with any potential candidate.  Instead, in most cases, one has to wait for one main news bulletin at 8 to watch what is heavily summarised versions of events that should pass as ‘news’.

They may argue that they do not have the funding or capacity to do so but that again would to be a tad dishonest.  They should have been ready to do so. That’s largely because their role is to serve the public interest.  And using public funding (licence fees and government subsidies).  And this public interest means enabling the greatest possible access to information and free expression by all Zimbabweans on the electoral process/cycle, candidates and events.

What however is obtaining, and conveniently excused by way of ‘payment for adverts’, is a carefully choreographed positioning of the state broadcaster in favour of the ruling party and its leaders.  This is not helped by the inadequacies of the ZEC media liaison committee which appears to believe its role is merely to monitor media coverage as opposed to enabling a free and fair media environment that accentuates free expression and access to information. Nor has it ever sought to bring the media to democratic account for any specific transgressions (real or imagined).   This is despite an assumption that this same committee takes over a majority of the functions of constitutional Zimbabwe Media Commission (ZMC).

In essence whatever excuses ZBC is giving either against political parties or in favour of advertisements, it is not playing tis true public service broadcasting role.  Nor does it appear to intend to do so in the short and long term. But even if what appears to be its preferred political party winning the 2018 election, its role will once again regrettably be to act more to undermine free expression and access to information. And not just for elections.