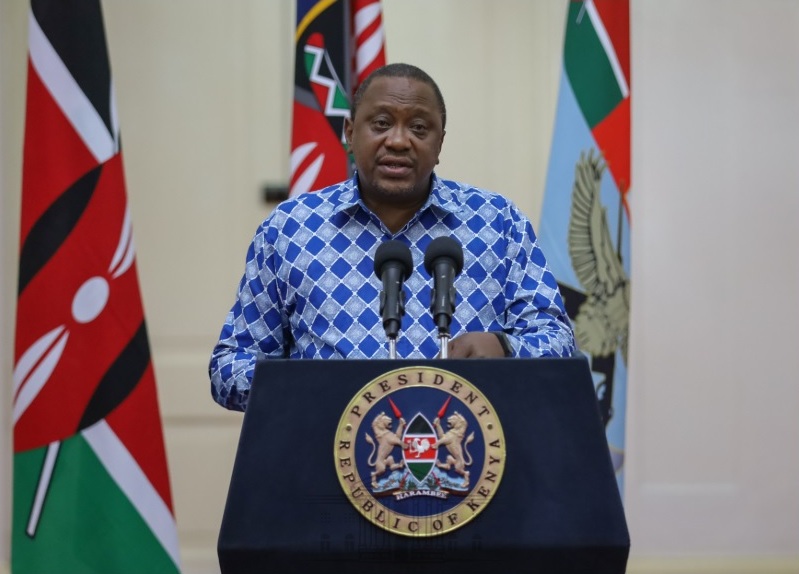 President Uhuru Kenyatta on Wednesday (25/03/2020) announced that the first patient diagnosed with coronavirus in Kenya has fully recovered. The patient was first diagnosed with the killer disease 13 days ago after she arrived in the country from the US via London.

Kenya as so far recorded 31 cases with one death. South Africa is still the most affected country, currently recording 709 cases with 12 recoveries, with zero deaths recorded so far (find realtime stats here). Egypt has recorded 456 cases, 95 recoveries, and 21 deaths.

In a bid to control the spread of the disease in Kenya, President Kenyatta also announced a raft of measures that will be put in effect over the next few days to limit the movement of people.

Among them is 7.00 PM – 5.00 PM curfew which took effect from Wednesday evening. Shopping malls will also be closed to the public over the weekend with only supermarkets, chemists, hospitals and other providers of services identified as essential allowed to operate.

The National Ferry Service which operates the ferry services in Kenya’s second city of Mombasa will now be overseen by various arms of the country’s security apparatus.

The president also announced a 30 percent pay cut for himself, the deputy president and senior government officials with the funds being channeled to help the fight against covid-19. Other arms of government like the legislature and judiciary are also, expected to make similar announcements in the coming days as the government raises funds to fight the disease.

All government staff except those involved in the security arms of government and other essential services provision will be expected to work from home.

Earlier, the government had announced the closure of Kenyan airports to international flights with the exception of those bringing Kenyan citizens or residents back home.

To cushion ordinary Kenyans, the president announced that workers earning a gross salary of less than USD 240 will not pay taxes on their earnings during this period. Other carders of taxpayers will now pay 25% tax on their earnings, down from 30%.

The government is also seeking parliamentary approval to reduce corporation tax from 30% to 25%. Borrowers who default on their loan repayments from 1st of April 2020 will also not be negatively listed on the Credit Reference Bureau.

Drop in the ocean

The economic measures announced by the president have widely been interpreted as a drop in the ocean as the government struggles to support a dwindling economy. Many small and medium businesses that have been worst hit by the effects of the pandemic say they expected measures that would cushion their businesses during these unpredictable times.

If you give my employees a tax reprieve and I am unable to raise operational costs to cover me for the next 3 – 4 months, how will that help them once I send them home?

Not a bad proposal but where does an entrepreneur like me benefit?

The government has also been faulted for not meeting stringent hygiene standards at the quarantine centers for citizens and residents returning to the country from abroad. Those on quarantine now fear that the centers, some of which are crowded, could spread the disease to those who were otherwise healthy.

Some of the facilities lack adequate running water for handwashing and ablution facilities.