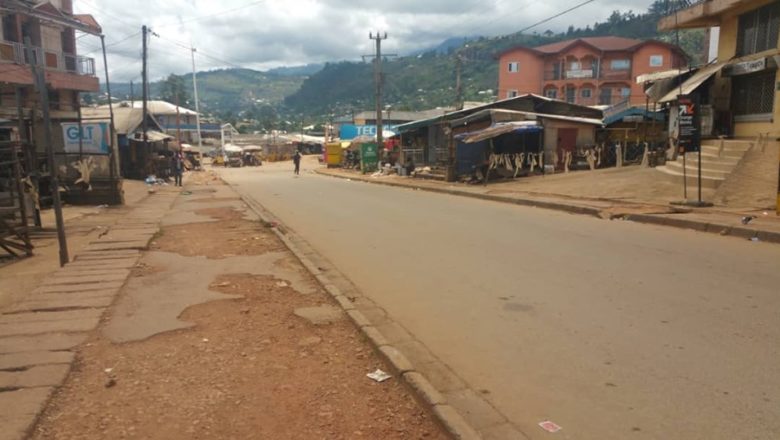 (This article was originally published in French on 4th April 2020)

While the number of confirmed cases of COVID-19 in Cameroon exceeds 200, some citizens are asking what the government is waiting for to establish a full lockdown, at least in the most affected cities.

Between March 6, the date the first case was confirmed, and March 31, 2020, Cameroon officially registered 223 confirmed cases of coronavirus. On March 17, as the country registered its tenth case, the government implemented steps to try to contain or at least slow the spread of the virus. Two weeks later, it is obvious that the measures are only relatively effective since the number of infected people continues to increase exponentially – and we are only talking about the tested cases. Consequently, many Cameroonians wonder why the government is delaying the enforcement of a general lockdown as has been done elsewhere in Africa.

Thirteen measures to deal with coronavirus

The Government of Cameroon took its first measures on March 17, 2020, when the country registered its 10th confirmed case. Before that, everything was as if Cameroon couldn’t be affected by the virus. Three days before, the president of the Organizing Committee of the Africa Cup of Nations reassured the CAN that measures had been taken by Cameroon to host “all the delegations announced by CAN take part in the phase final of the championship”- even those coming from countries already affected by COVID-19.

Through the Prime Minister Joseph Dion Ngute, the State of Cameroon made public the 13 points that made up the government’s response to the rapid spread of the virus: basically, public and private schools and universities would remain closed until further notice, the borders would be closed with a ban on issuing visas, the bars would now be closed from 6 pm, and gatherings limited to less than 50 people, among others.

In practice, these measures were not really complied with, except for a few, notably the closing of schools and the closing of bars and snack shops after 6 p.m.

Obviously, the number of cases kept on increasing. On March 23, another measure was taken by the Minister of Transport, reducing the number of passengers in public transports, much to the discontent of some fellow citizens who, no doubt rightly, were more in favor of a full containment as a solution to the rapid spread of the virus which is already present in four regions of the country.

In the current situation, it would be very difficult to establish a general containment in Cameroon. Indeed, the vast majority of the Cameroonese population lives from small trades that force citizens to live one day at a time, the daily livelihood being provided by the activity conducted the day before. In this context, it is practically impossible for the Cameroonese people to do the necessary stock up to survive for a few days or a few weeks without working.

Obviously, for the containment to be a possible solution, the government must think of accompanying measures as is already done elsewhere in Africa. Why is the State of Cameroon not taking similar measures? No doubt our country does not have the necessary funds to cover such an operation.

Let’s recall that since 2017, the war in the North West and South West of the country is bleeding the Cameroonese public treasury dry, and many unprofitable investments have been made in the meantime – including, in particular, the 75 billion spent to acquire 500,000 computers for the students, and the more than 1000 billion squandered in the CAN sites, not all completed to date.

While it is obvious that a general containment without accompanying measures would be suicidal for Cameroon, we are entitled to wonder if, even without containment, the country is safe from possible troubles.

Economic activity is currently stalled. Travel is reduced, and even the crowds in the markets have decreased. However, several traders took advantage of the situation to increase the prices of their goods.

If measures are not urgently taken, in particular with regard to the supply and distribution of basic necessities, we can safely bet that the Cameroonese people will very quickly find themselves without anything to eat; Therefore, we could find ourselves in the same situation as in 2008, with the difference that a large part of the army is at the front in the far North and in the English-speaking area, and therefore the manpower may not be sufficient to contain the population as in 2008.

On March 30, 2020, President Paul Biya authorized the establishment of a solidarity fund for the response against Covid19. The fund, announced the Minister of Health Dr. Manaouda Malachie during a press conference, will first be provided with one billion CFA francs, which will be used to care for patients with coronavirus. In addition, social housing at the Olembe site in Yaoundé is available to accommodate 200 patients, while waiting for other sites to be developed.

While the initiative to establish a solidarity fund is laudable, we should acknowledge that the amount allocated is insignificant, if it must be compared to the countries of the sub-region or West Africa where the funds allocated to the response go up to 1 000 billion.

All we can hope for is that other measures are taken in the same direction for better management of the health crisis which is now taking on rather worrying proportions.