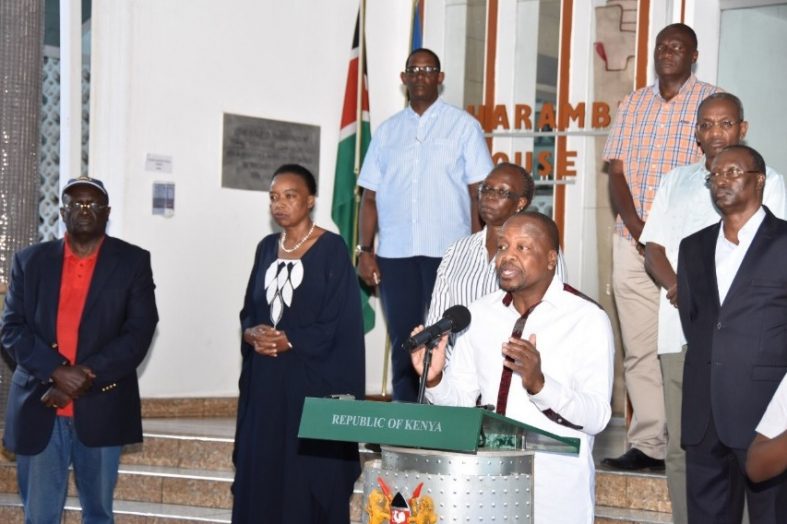 The government of Kenya on Monday (30th March 2020) made an appeal to employers not to subject their employees to pay cuts or layoffs as the impact of Covid-19 on the economy began to become more glaring.

Several industries have been faced with reduced earnings since the first case was reported in the country. Hospitality, entertainment, aviation, and transport are some of the industries worst hit even as the government attempts to put in place more measures to limit public exposure to the virus that has now infected 50 people in Kenya.

Speaking during his daily media briefing, Health Minister, Mutahi Kagwe appealed to employers to be humane and not subject their employees to further distress during this season.

It’s difficult to tell if this appeal will be heeded as industries continue to count losses in the wake of this pandemic. Several companies have already laid-off employees, with several others sending notices of pay cuts beginning 1st April.

The government had moved to cushion employees by reducing taxes on their salaries but the efforts seem to be too little to make any impact, even as the economy stares on more business closures.

Already, the ministry of health is predicting that the confirmed cases might rise to 1,000 within the next seven days, and to 10,000 by the end of April.

Speaking during the same briefing, Acting Director-General of Health Dr. Patrick Amoth, said a forecast has extrapolated 1,000 cases by the end of the first week of April.

These projections point to the likelihood of upgrading of the existing dusk to dawn curfew in Kenya to a full lockdown in the coming future. A move that will negatively impact on the balance sheets of already struggling businesses.

Kenya’s neighbor to the west, Uganda, On Monday announce a 14 – day lockdown. Other countries that have announced lockdowns include Zimbabwe and South Africa.

President Uhuru Kenyatta also announced the esta COVID-19 Emergency Response Fund which will be overseen by an eleven-man board consisting of industry leaders from the private sector and government.

The Fund to foster Kenya’s national response to the coronavirus pandemic.

“The principal object of the Fund shall be to mobilize resources for emergency response towards containing the spread, effects and impact of the COVID-19 pandemic,”  reads a statement released by statehouse.