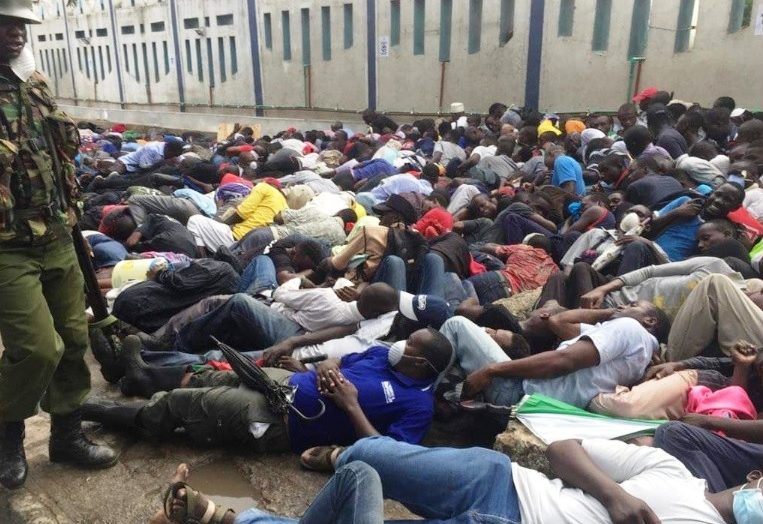 The hashtags #PoliceBrutality, #uhurumustgo, and #CurfewKenya are currently the top trending topics on Twitter as Kenyans display their disgust at the manner in which security agencies enforced the first day of a 7 .00PM to 5.00 AM curfew announced by President Uhuru Kenyatta earlier in the week.

Social media platforms are awash with images and videos of Kenyans being clobbered by police officers while returning home from work. Some, as was the case in Kenya’s coastal city of Mombasa, started encountering the wrath of the security officers one and a half hours before the curfew was to take effect.

More footage from Mombasa and yet again, at the end of the clip, police mercilessly beating a guy lying on the ground. This is no way to fight a coronavirus epidemic. pic.twitter.com/t8aOynohoY

At a time when health experts are cautioning on crowding, police action caused bundling of people into crowds such as the one shown in the image in the attached tweet. If just one person in this crowd was already exhibiting symptoms of covid-19, you can’t begin to imagine the kind of risk we are dealing with here:

These cases were however not limited to Mombasa, across the country, Kenyans have been sharing images and videos of police officers using excessive force to enforce the curfew, even on women. Some of those caught up in this were health workers and other essential service providers who were either on their way to work or on their way home from work.

Imagine this person is a medic or under Essential Services then this happens. Tell me why wouldn’t such a person just turn back & go home. #CurfewKenya #PoliceBrutality pic.twitter.com/4pVKOAXIRI

Not even journalists were spared:

Police Spokesperson, Charles Owino, has since apologized for the incidents in Mombasa but is yet to acknowledge the use of excessive force by officers in other parts of the country.

Charles Owino, Police Spokesman: We must say that incidents in Mombasa are regrettable. However, we need to put a balance on what we want as a society. The disease has threatened mankind. The curfew must be followed. The position is clear. We must have regard for the rule of law pic.twitter.com/9ouBFxCKcI

While Kenyan’s generally understand the importance of limiting movement as a strategy in the fight against coronavirus, the government’s methods of enforcing the same have come into question as it does not take into account the situation on the ground. Other directives such as public transporters carrying only have their usual capacity have led to congestion of commuters at bus stations, which other than putting them at risk to contracting the virus, has also meant that there are not enough vehicles to take people home in time to beat the curfew.

Easter Achieng’, a human rights activist based in the city of Kisumu, questions the approach taken by the police in enforcing this curfew:

Utumishi kwa wote (service to all – which is the Kenya police motto)  means you assist in creating law and order. When systems are efficient and our public transport operates effectively, then we can speak. When we from middle class don’t understand that unless govt makes social protection work for these same people being beaten because they need food for their children and themselves, then we have a challenge . As you support use of excessive force kindly help us get food baskets and medical supplies to those in informal settlements who may not have freezers and pantries to stock up. A law can only be enforced if we understand the gendered needs of all classes and support their efforts to survive.

Last night’s action by police clearly expose deeper problems with our overall strategy when it comes to containing this pandemic. Serious questions need to be asked about the kind of training our officers were taken through before being sent out to enforce a curfew in these circumstances.

The government will need to be more responsive, including forcing employers to let their employees leave work and report at times that allow them to adhere to the curfew.