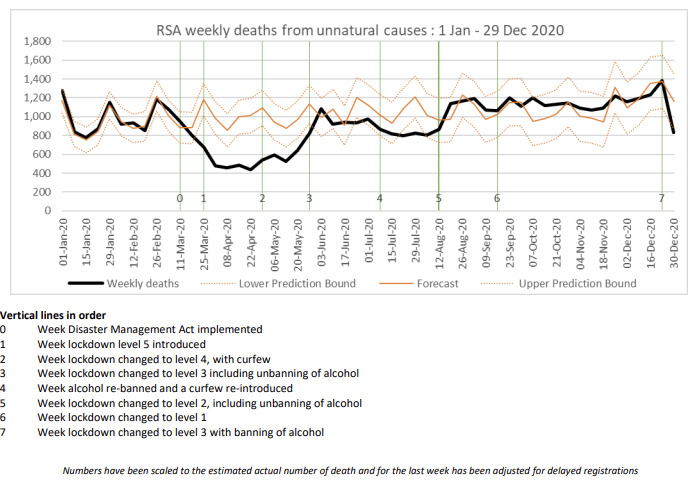 Cyril Ramaphosa (South Africa’s President) reinstated a ban on the sale of alcohol at both restaurants and retail outlets on December 28 2020, and that ban is still in place today, with an end-date to be determined by the whims of the National Coronavirus Command Council.

Two background points: South Africa has a very unhealthy relationship with alcohol. We drink a lot, and we die on the roads a lot, whether behind the wheel or stumbling into oncoming traffic. Furthermore, alcohol has historically been used (and still is, although in increasingly rare/marginal cases) as a mechanism to buttress racial injustice in our wine industry, even though the “dop system” (where farmworkers are (partly) paid in wine) was outlawed in 2003.

Second, I have massive conflicts on interest on the issue of wine, alcohol in general, restaurants and their (and their staff’s) welfare, so I’m certainly not impartial on this issue. Many of my friends are restaurant owners, winemakers, or people who more generally work in that industry. My brother is the publisher of the Platter’s Wine Guide, South Africa’s first wine guide, published annually since 1980. And, I like wine (also, other alcoholic beverages).

With that said, it’s difficult (read: impossible) to dispute that a ban on the sale of alcohol here in South Africa makes sense during Covid-19 peaks, where the last thing that overburdened hospitals need to deal with is easily-avoidable road traffic accidents or the stabby fallout from an argument about which football team has the most creative midfielder.

Look at the graph posted here as the featured image: deaths (and by extension, stress on the healthcare system in general) dropped significantly when Ramaphosa reinstated the ban on alcohol sales.

But, that ban comes at a price. There is no point in bars remaining open, seeing as there is no point in going to them. Many restaurants have closed already, and more have closed since the new ban because some customers don’t want to go out to dinner if they can’t be served a glass of wine. And of course, that means staff are probably out of a job, and that business owners/employers also either sacrifice assets or see them plummet in value.

Given that we have various real problems (Covid, and irresponsible alcohol use), it’s understandable that the government response would be draconian. Understandable does however not mean excusable, or rational.

Covid-19 is a distraction, in this case. It’s going to be used as an excuse for petty tyrants like our Minister of Police to assert his authority, and for unimaginative bureaucrats who want to point to “successes” to reach for declining deaths as a result of an alcohol ban to argue that they are doing a job, or making a difference.

But Covid-19 will pass, or it won’t, and will instead be replaced by a new pandemic. And meanwhile, the underlying problems will remain, namely that South Africans drink too much (and then drive, or walk, irresponsibly).

Addressing that underlying problem is not a short-term project – it’s a matter of mindset and culture, and the Band-Aid of a temporary alcohol ban does nothing to address it, and perhaps only serves to strengthen the causes of the petty bureaucrats and authoritarians.

What else could be done, or what could be done differently? I see that discussions have begun on raising the legal age for purchasing and consuming alcohol to 21 (from the current 18), which is a start (although it presumes an ability to police or enforce the law, which isn’t in place at all).

That would be a good start, but another would be to stop looking for quick-fix solutions and to rather recognise that this is a deep-seated cultural problem, and therefore, that a remedy will take years (if not decades) to implement, and that it’s not necessarily a failure of policy when we don’t see massive short-term improvements.

Among the possible policy interventions I can think of, or that have come up in conversations with the aforementioned sorts of people:

Yes, of course, there are workarounds to all these ideas. And yes, some problems aren’t addressed, such as the near-complete absence of law enforcement of drunken driving on the roads, which would really help to address the injury and fatality rate.

But, all of these incremental steps (and the others that actual experts in the field could suggest) could make a cumulative difference, so long as one stops looking for the easy headline-successes, and instead, realises that there is a systemic, long-term, problem to be addressed here.

The wine industry alone (never mind all the others – breweries, hospitality, etc.) stands to lose R1.5bn in the next few weeks, as a new harvest commences in a context where there is nowhere to store the juice because the previous harvest hasn’t been sold. This, in a country with a significant tourist-base driven by that exact industry, and where the wine farms are one of our largest employers, in a country with deadly levels of unemployment.

Bruce Jack – one of our veteran winemakers – made the human cost of lockdowns very clear in a recent article. And, I’m certainly not anti-lockdown in any general sense – people cannot be trusted to do what’s in their own best interests, even if that incompetence is regularly exploited by authorities.

But a balance can be struck, and a balance needs to be struck. And in this case, short-term gains of headlines showing plummeting deaths perhaps obscures the fact that we could perhaps have achieved most of those same lives saved with far fewer jobs lost, with a more rational long-term approach.

Covid-19 is an opportunity to address a systemic problem – involving reshaping our relations and regulations to alcohol in general – not (ideally, or only) an opportunity to trumpet short-term gains as successes in a war against a (hopefully) temporary foe, while various industries (and liberties) are brought to their knees.