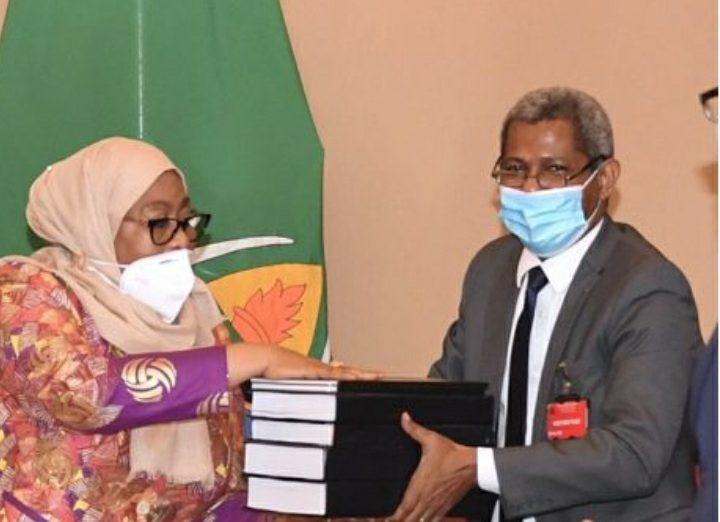 Tanzania is making an about-turn in its approach to tackling the Covid-19 pandemic. Samia Suluhu Hassan who took over as president from John Pombe Magufuli following his death in March has shown strong indication about her intention to do things differently.

On her first official visit outside the country, she travelled to Uganda where she was seen wearing an N95 face mask in public for the first time. Shortly after her return to Tanzania, she set up a task force to develop a strategy on the country’s response to the pandemic, saying ” we cannot isolate ourselves like an island while the world is moving in a different direction.

During her recent trip to Kenya, where she among other engagements addressed the business community from both countries and Kenya’s parliament, she promised to work with regional bodies to harmonize Covid-19 containment measures.

In her first public engagement after the Kenyan trip, Ms. Suluhu enforced a mask-mandate on delegates attending a consultative meeting with Dar es Salaam elders. It was the first time a public function in Tanzania had attendees forced to wear masks.

The committee of experts formed to develop Tanzania’s strategy of dealing with the pandemic submitted their report to the president in Dar es Salaam on Monday. The experts advised the government to accept Covid-19 vaccines saying they “have been checked and proven to be safe.”

With this policy shift, Tanzania will now follow the World Health Organisation (WHO) protocols, which were previously ignored under Magufuli.

It advised the government through its agencies to address the issue of vaccination by joining the Covax program under the Gavi umbrella. The COVAXprogram aims at ensuring the world’s poorest countries receive equal coverage of their vaccines despite their limited economic capacity.

Joining the COVAX vaccine-sharing facility enables poorer countries like Tanzania to secure doses for their citizens. All but a handful of developing countries have signed up to the facility amid the global pandemic.

The Committee urges the government to use its instruments to proceed with the steps towards allowing the free use of the vaccine against COVID-19 – using the vaccines listed by the WHO to give citizens the protection they deserve.

In January, Magufuli had warned citizens against COVID-19 vaccines and urged them to instead fight the virus using at-home remedies like steam inhalation.

The experts further recommend intensified surveillance and enforcement of lockdown procedures where necessary. They advise the government to ramp up testing services and publish daily statistics. In May 2020, Magufuli banned testing and publication of Covid-19 data by Tanzanian agencies.

They also asked the government to consult and with regional and international bodies like the East Africa Community, Southern Africa Development Community, Africa Union and WHO.

While it is not immediately clear what the president would do with the recommendations, the setting up of this committee, her receiving this report at the statehouse, viewed with her actions and pronouncements while outside the country give an indication of a leader intent on changing tact.

Even though she was considered a confidant of the late former president, Ms. Suluhu has in word and deed showed that she was not afraid to overturn some of her predecessor’s policies. During her maiden address to parliament, she extended an olive branch to the opposition, a departure from the combative approach taken by Magufuli while dealing with opposition. This was manifested in the numerous arrests and frivolous prosecution opposition politicians were treated to.

She will however have to walk a tight rope even as she attempts to introduce this and other reforms so as not to upset Magufuli’s inner circle who still wield so much power inside the ruling CCM party.

This article was partly produced by Sofia Wambura/Sauti Kubwa.