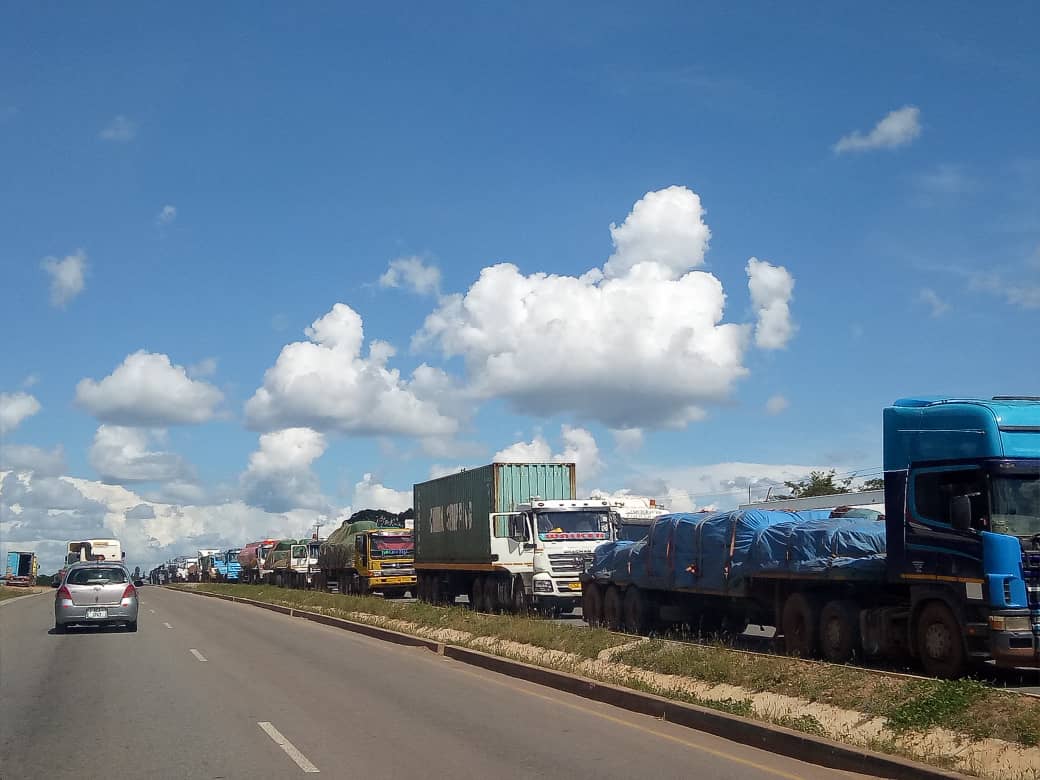 Hundreds of trucks from the Southern Africa Development Community (SADC) are stuck on the Zambian side of the Kasumbalesa border post in Chililabombwe District following the detection of two suspected cases of Corona Virus in the Congolese city of Lubumbashi. On Sunday, authorities in the Congolese border town of Kasumbalesa closed their side of the border after word went around that the Corona Virus had reached Lubumbashi.

This caused panic on the Zambian side as hundreds of truckers from SADC parked their vehicles after failed attempts to cross the border.

This forced authorities on the Zambian side to engage their Congolese counterparts who agreed to address the truckers.
“The border is wide open as I speak. But the truth is that we had two cases of Corona Virus in Lubumbashi yesterday and the Governor of Upper Katanga has directed us to take measures to avoid the spread,” said Adrian Kapampa, the Mayor of the Congolese town of Kasumbalesa when he addressed hundreds of truck drivers on the Zambian side.

Despite this assurance, truckers refused to cross fearing the Coronavirus. Buy the end of Sunday; the queue of trucks from the Kasumbalesa border reached the town of Chililabombwe which is 15 kilometres away.

And by midday today, the queue has reached the mining town of Chingola which is 50 kilometres away. The trucks are now pilling up on the Kitwe-Chingola Dual Carriageway and authorities fear that if truckers do not cross into the DRC, the queue may reach Zambia’s second-largest city Kitwe which is 54 kilometres away.

Kasumbalesa is the busiest crossing point between Zambia and the Democratic Republic of Congo (DRC).

Trucks from across SADC use the border to supply the DRC with mining equipment, food and fuel.

On the other hand, raw materials from the mineral-rich Katanga region pass through the Kasumbalesa border on its way to ports like Durban in South Africa, Walvis Bay in Namibia and Dar Es Salaam in Tanzania. Kasumbalesa, which handles about 1,200 trucks on a daily basis, is a major economic centre for the region and any disturbance on the operations has far-reaching consequences to the two countries.

“As a municipality, we are worried because these truckers are parked along the road where there are no sanitary facilities. This is a big threat to us and can spread communicable diseases. Secondly, most truck drivers come from countries where the Corona Virus has already been detected,” said Chingola Mayor Titus Tembo in an interview.

A visit to the Chingola-Kitwe Dual Carriageway, Chingola-Chililabombwe road and the Chililabombwe-Kasumbalesa road found drivers using the nearby bush as a toilet.

“In this situation, it is easy to catch the Corona Virus because as drivers, we come from various countries,” lamented Kelvin Milambo, a Zambian driver who works for a South African trucking company.
Other truck drivers are more worried about health.

Some truckers from foreign countries have been stuck on the queue for over two days.

“We are asking the Zambian government to supply us with a water bowser so that we can be washing our hands and relieving ourselves,” said another driver who did not want to be named.

The threat of Covid 19 is high in Zambia, a southern African country which has now confirmed 12 cases. Earlier in the day, President Edgar Lungu addressed the nation and announced that 10 more cases had been detected and an undisclosed number of people have been placed under quarantine.

As a measure to contain the virus, all schools, bars, gyms and cinemas have been shut while churches only operate for an hour per week. The Zambian government has resisted calls to lock down the country insisting that the country’s landlocked geographical position can disadvantage it if a lockdown is enforced.

Of the 12 cases of Corona Virus recorded, 11 involve Zambians who returned from abroad. This could be the reason why some international airports have been shut.

The airport in Lusaka has more sophisticated surveillance equipment. Zambia imports and exports a lot of products from China, Europe and the United States of America and it relies on its neighbours for passage of these vital products.

This could be the reason why the Cabinet has resisted locking down the country as South Africa has done. But despite this disease posing a big challenge to society, Zambians have taken a casual approach to it.

On the streets, people can still be seen gathering in large numbers, shaking hands and hugging. If a lockdown ever comes to Zambia, soldiers have to be deployed to enforce it because Zambians cannot keep themselves away from the streets.

But one positive aspect of the Corona Virus has brought is a quest for cleanliness. Markets and streets are being cleaned by traders without being forced by authorities. And the threat of the virus has hit hard on the hospitality and tourism sector.

Several national and international conferences and meetings have been cancelled or postponed.

“So far, 15,000 visitors have cancelled their trips to Zambia since we recorded our first case of the Corona Virus. Some of them are even demanding refunds,” said Zambia’s Tourism Minister Ronald Chitotela last week.

Livingstone, a town which hosts the majestic Victoria Falls, has suffered heavily due to the Corona Virus. The town, which is unofficially recognized as Zambia’s tourism capital, has seen a slump in tourist bookings and arrivals and with the closure of its international airport as announced today, the situation is likely to become even worse.

The state-run Times of Zambia newspaper has reported today that 759 out of the 1,200 workers involved in the tourism industry in Livingstone have lost their jobs. Livingstone is named after the 18th Century English explorer David Livingstone who became the first white man to see the Victoria Falls which locals call “Mosi Ou Tunya” or The Smoke that Thunders.

In the mining region of the Copperbelt, the effects of the Corona Virus have also been felt.

The Copperbelt, which borders the DRC, has several copper, cobalt and emerald mines. “We have also been badly hit by the Corona Virus. Most of the equipment we supply to the mines come from China and the restrictions put in place to contain the virus that side have seen our products delaying on arrival for between 15 to 20 days,” said Augustine Mubanga, President of the Association of Mine Suppliers and Contractors.

Mine Suppliers and Contractors are a major stakeholder in Zambia’s mining sector as they employ thousands of workers to execute their contracts in major mines run by renowned international firms like Glencore, Gemfields and Vedanta.

Countrywide, alcohol-based sanitisers which are being encouraged by health authorities, have run out in most chain stores as Zambians rush to protect themselves from the virus.

This has led to locals using improvised methods of sanitizing their hands using local products.