The (unbearable?) whiteness of #ZumaMustFall 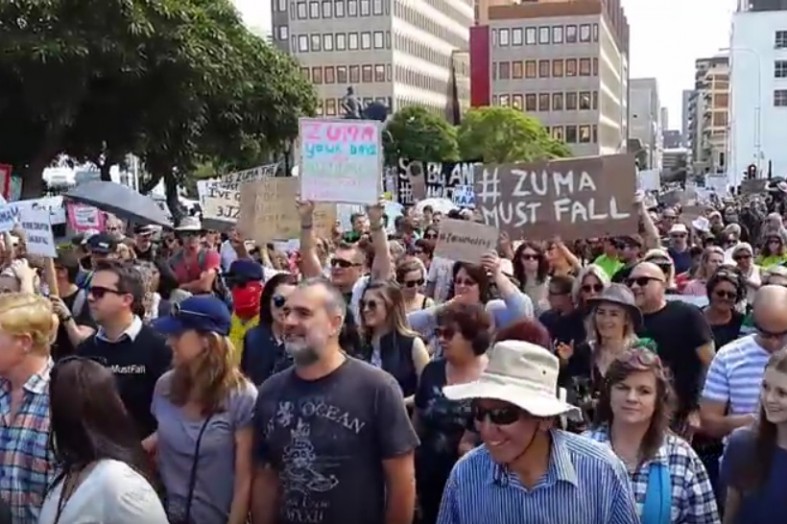 It’s an undeniable fact that last month’s #ZumaMustFall march in Cape Town was overwhelmingly white. It’s also true that – as I said in my previous post – the “Zuma must fall” hashtag and related tweets have provided an opportunity for some folks to flaunt obviously racist sentiment.

But neither of these features are good reason to dismiss the possibility that many of yesterday’s marchers were fully sincere, aware of their “white privilege” (quotes not because I reject the concept, but because the concept admits to different interpretations), and not at all inconsistent (some have been asking “where were they when the #FeesMustFall marches were happening”, etc.)

First, though, a note on the hashtag #ZumaMustFall itself. I’ve seen comment on social media that this hashtag is an abusive or insulting appropriation of the force generated by the #RhodesMustFall and the #FeesMustFall hashtags.

Nonsense. It’s hardly the case that the Rhodes and Fees hashtags were the first to trend in defense of a political goal, and the Zuma one won’t be the last. This is now a standard trope of Twitter and social media in general, and everything is routinely hashtagged.

Whatever your cause is, the hashtag identifying it will rise and fall and rise again, depending on what it’s competing against and the timing of its deployment, and even if RhodesMustFall had never happened but the firing on Nene had, we’d likely have seen #ZumaMustFall – it’s no insult to or appropriation of any other movement.

Second, the criticism of yesterday’s marches as being motivated by “self interest”, where this charge is meant to highlight the contrast between how enthusiastically white Capetonians supported yesterday’s march, and their alleged suspicion or lack of support for the #FeesMustFall and related movements.

I’m sure there were lots of marchers yesterday who are inconsistent in this manner, and who were disparaging and even abusive towards the protests that occurred earlier this year. So yes, there would be some (unknowable) number of potential hypocrites in the marches.

But, you only know if they are hypocrites if a) you think it’s already established that the causes are or should be considered equally worthy of support and b) you know that they were opposed to the other protest movements.

It’s possible to have an argument regarding both these elements, in the sense that a hypothetical person could support some elements of #FeesMustFall and not others, and think that, on balance, they can’t join march X or Y.

You also can’t assume it’s compulsory for anyone to support your cause, and you certainly can’t assume that their lack of visible support means no support for it at all (rather than partial or complex support).

Having said that, of course there is a moral blindness in not seeing that you look like an oblivious and insensitive ass if it takes massive currency depreciation to get you off your ass and into the streets, compared with being roused by the plight of millions of South Africans who are desperate for a fair chance at an education and a fair deal in life.

It’s an empty truism to note that “people only protest when their self-interest is threatened” or somesuch sentiment. Of course they do. But their potential hypocrisy (and, to be clear, actual hypocrisy in many cases) can be treated as a separate issue to whether a particular march or cause is legitimate or not.

And in this case, among all the white protesters worried about the increasing cost of their Amazon.com orders or decreasing value of their international portfolio, there would also have been some who recognise that increased inflation will hurt the poor most of all, and were marching for that reason or related reasons instead.

Then, we might also want to say that any amount of political awareness is surely better than none, and allow for the possibility that once some of those who gathered in the Company’s Garden (yes, very worthy of mockery) will develop more awareness as a result of yesterday’s activity. Baby steps, as they say.

Have we really reached a point in our political debate where the overwhelming whiteness of Cape Town’s march was problematic enough that it might somehow be more progressive to go to the movies than to join the march?