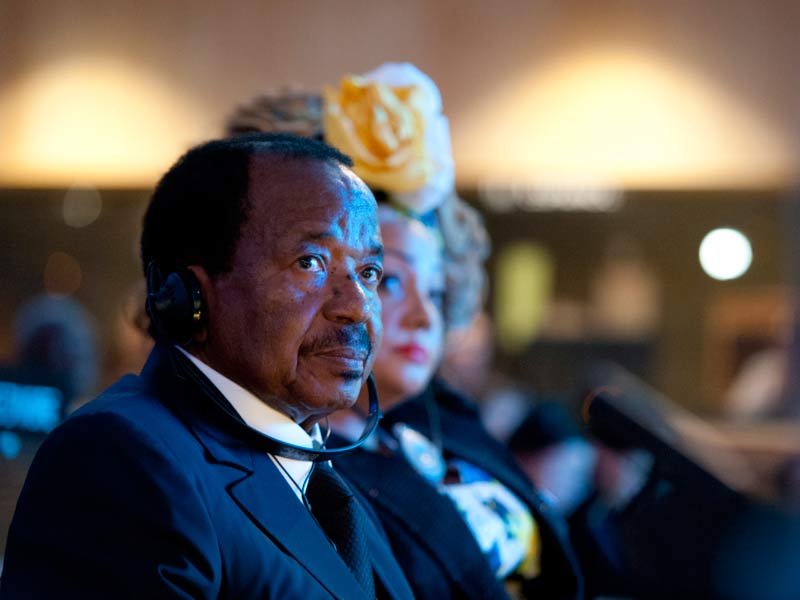 The Anti-Sardinard Brigade organized a demonstration in Geneva against President Paul Biya’s stay in Switzerland.

Cameroonian activists in the Diaspora, most of whom are members of the Anti-Sardinard Brigade (BAS) organized a demonstration on Saturday, July 17, 2021 in Geneva against the presence of Paul Biya, President of the Republic of Cameroon, in Swiss territory. The demonstration, which was previously authorized, was subsequently banned by the Swiss authorities, due to the risk of violence. Diaspora activists, who were present in Geneva in large numbers, defied the ban and demonstrated despite the interdiction, resulting in violence and a heavy-handed response from the Geneva police.

“Operation Catcham” is the name that some activists, members or not of the BAS, gave to the demonstration of July 17. Literally meaning “catch him” in pidgin English, the operation seemed to be aimed at capturing President Biya, as some activists and internet users hammered out on social media.

For many Cameroonians, therefore, the objective of the demonstrators was not only to express themselves but also to attack, physically if the opportunity arose, President Biya. But could the BAS or the demonstrators, in general, have attacked Paul Biya? Clearly not. The security of the President, as well as the Swiss authorities, would not have allowed it. And the demonstrators knew it very well.

If Operation Catcham was not intended to ‘catch’ the Cameroonian president, why was it created? One thing is certain, seeing hundreds of people gather against the presence of a head of state in a foreign country is never a good thing.

Already in 2019, members of the BAS caused a ruckus in front of the Intercontinental Hotel in Geneva during Paul Biya’s last visit to the Swiss territory. After almost 2 years in Cameroon, the fact that the same demonstrations are organized gives bad press to the Cameroonian president.

It shall be recalled that following the events of 2019, Swiss MP Sylvain Thevoz launched a petition addressed to the Grand Council of Geneva, “for Geneva to declare Paul Biya persona non grata”, signed by some MPs. In addition, several newspapers reported the case, especially since during the clashes, journalists had been assaulted by Paul Biya’s bodyguard.

All this had already given a certain image of President Biya. Two years later, when he announced a private visit to Europe, his compatriots in the diaspora mobilized and defied the ban on demonstrations.

As in 2019 another Swiss MP, Stéfanie Prezioso, stepped up to the plate to demand that Paul Biya should no longer be welcomed in Geneva. And as in 2019, many international newspapers are reporting the case extensively in their columns and on social networks.

It seems that this is the goal of the BAS: to make Paul Biya a cumbersome package for European countries that would like to host him. To give the president bad press and to take advantage to denounce everything happening in the country that they consider abnormal.

“It happens in Cameroon”

At the level of Cameroon, the authorities and other personalities who have spoken out have mostly condemned the actions of the BAS, arguing that problems related to Cameroonians should be solved in Cameroon and not in Switzerland.

However, a request for a demonstration filed a few days later by the Movement for the Rebirth of Cameroon (MRC), the political party of Maurice Kamto, was banned, even though elsewhere in the country people were demonstrating freely to condemn the actions of the diaspora. A double standard that perhaps justifies that Europe has become the field of expression for some Cameroonians.

Can we say that Operation Catcham was a success? It’s hard to say. What is certain is that President Biya is still in Switzerland and that the Swiss authorities have not seen fit to ask him to pack up. Time will certainly allow us to judge the results of this operation based on Paul Biya’s future trips outside Cameroon.