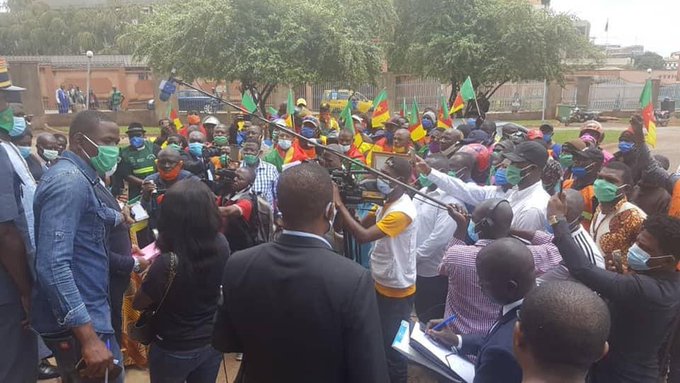 Following the call for demonstration by Maurice Kamto, calling for the removal of Paul Biya from power after 38 years ruling as President, the government is taking steps to discourage potential demonstrators and prevent marches from taking place.

At a press conference held on the 24th of August at the headquarters of his political party, the Movement for the Renaissance of Cameroon (MRC), Maurice Kamto gave an ultimatum to the government, which he considers illegitimate, and specifically to President Paul Biya, whom he forbids to hold new elections without first reforming the electoral code and beginning to solve the Anglophone crisis. Not surprisingly, threats by the MRC leader were ignored, since soon after making his statement, two presidential decrees were made public, including one which called for the electorate to be convened for the 6th of December 2020.

After the call for regional elections, the march scheduled on the 22nd of September 2020 received significant support on social networks.

In many groups and on the pages of members and sympathizers of the Movement for the Renaissance of Cameroon, posts aimed at reminding Cameroonians of the injustice in which they have been living for decades became more and more numerous. And reading the numerous comments, the number of people determined to show their tiredness on this 22nd of September is quite high.

In the Cameroonian diaspora, marches planned in many European capitals took place on the 19th of September, as a prelude to the meeting of the 22nd. According to diaspora activists, the marches are intended to convey a message to the violence-loving Cameroonian authorities that no arrests, torture or violence against peaceful demonstrators will be tolerated.

If Maurice Kanto only had a few supports that one can describe as timid after his press conference, he received new supports in recent weeks, notably from the Chairman of the Social Democratic Front (SDF) – one of their members had already stated that the MRC’s approach was in line with theirs.

In a statement signed on the 2nd of September by Ni John Fru Ndi, the SDF officially took a stand, refusing to take part in any new election unless three conditions were met, namely: a consensual review of the electoral code, the establishment of a ceasefire in the English-speaking regions and the exploration of avenues for the establishment of a federal system in Cameroon. Even if the SDF does not officially intend to take part in demonstrations on the 22nd of September, its position strengthens the MRC’s.

In addition to the SDF, other political actors announced that they were holding discussions with the MRC. This is the case of Djeukam Tchameni and, more recently, of the leader of the Cameroon People Party (CPP) Kah Walla, who has been refusing to take part in the elections in Cameroon since 2011. However, other organizations spoke in favour of Pr. Kamto, including civil society organizations that called for the creation of a Republican Common Front, to review the electoral system, the peaceful resolution of the Anglophone crisis and the establishment of lasting peace through national reconciliation.

On the 9th of September, the US Senate adopted a resolution regarding Cameroon, condemning both the army’s excesses and the exactions of the separatist forces which, it must be said, have multiplied since the Great National Dialogue held at the end of September 2019.

In this resolution, senators warn the state of Cameroon against deprivation of liberty and urge the government to respect the rights of citizens to express themselves. In addition, the Senate calls for the release of political prisoners and asks the government to supervise any political demonstrations. Finally, the U.S. Senators call on the State Department to impose targeted sanctions against the leaders responsible for exactions or human rights violations.

Maurice Kamto’s determination, the endorsement by some political personalities and CSOs of his call and the apparent mobilization of some Cameroonians for the demonstration of the 22nd of September, seem to be having an effect on the government of Cameroon, which decided to react in several ways.

On the 7th of September, the day the decree convening the electorate was released, the Minister of Territorial Administration (MINAT), Paul Atanga Nji, held a press conference in which he warned all those who would try to prevent the regional elections.

Then there are the decrees signed by the governors of the Central, Western and Coastal regions, which prohibit “until further notice” any undeclared public demonstration while recalling that any offender “shall be liable to the penalties provided for by the regulations in force”.

Several other ministers and personalities will be out to condemn the demonstration of the 22nd of September, which is sometimes described as an insurrection and others as a rebellion, both acts punishable under Cameroon’s penal code. This is the case of the press release published on the 15th of September by the Minister of Communication and Government Spokesman, René Emmanuel Sadi, who speaks of calls for insurrection and recalls that “these facts are provided for and repressed by the Penal Code”.

In Douala and Yaoundé, activists from the MRC and other allied parties such as the CPP have been arrested or have been the object of attempted arrests. Some people on social networks have reported being under surveillance. In both cities, there is a significant security deployment.

All this is punctuated by a counter-campaign on social networks and on radio and television channels, led by various personalities, the strategy being to qualify the demonstration planned by Maurice Kamto as an insurrection. Meanwhile, a counterdemonstration organized by activists of the ruling party, the Democratic Rally of the Cameroonian People (RDPC), is scheduled for the same day.

While the battle of September 22nd is already underway and, as we can well imagine, will become more intense as time goes by, no one can predict what will happen on this famous day. Will the mass demonstrations be held? If that is the case, how will the army and the authorities react? Will law enforcement agencies use violence as they did in October 2018, January and June 2019? Hard to say. What is certain is that Cameroon is playing for its future, and between September and December 2020, the news could be very eventful.