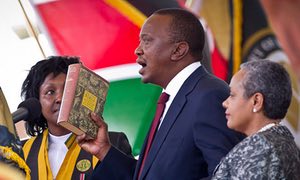 Antone Steynberg – A senior ICC lawyer has been quoted saying that the ICC might consider re-opening cases against President Kenyatta and his Deputy, William Ruto should the opposition take over government in August. While this might be good news to victims of the 2007 Post-Election Violence, it could also hand the current government a second term on a silver platter.

Kenyans are headed to the polls in August this year. This is coming in the backdrop of lingering food crisis, rising cost of living, corruption allegations, ethnic divisions and a general feeling that the country is headed in the wrong direction.

Ideally these are the ingredients needed for a regime change in any democracy. When that democracy is Kenya, a country with 42 ethnic communities that live with so much distrust and contempt for each other then the equation becomes a little complicated.

Before last week, the country was divided along two distinct blocks. One supporting the current government and drawing their numbers from the president and his deputy’s tribes which are two of the country’s largest ethnic communities – of course backed up with a few smaller tribes from the neighboring regions. On the other side was another union led by opposition leaders (with Raila Odinga as the Presidential candidate) who also craft their support base from three other mid-sized tribes and the coastal region which has due to historical injustices always opposed the government – especially the Kenyattas.

The tribal and regional arithmetic aside, polls show that Kenyans generally feel that the Kenyatta government is definitely headed in the wrong direction. The national debt in the last four years has risen between  USD 180 billion to USD 320 billion with little to be shown for it. This generally makes a regime change an attractive idea even to people who would naturally be inclined to vote for the current regime. Especially now that families cannot even put their staple food on the table.

In the last elections though, President Kenyatta and his deputy faced defeat on the eye until they galvanized their communities around the ICC debate. A BBC report says Kenyatta was able to “re-brand the indictment” in such a way that the “ICC suspect” label worked in his favor.

“In a country torn apart by ethnic divisions in 2007, there was great pressure to maintain an inner calm. But it was perfectly acceptable to adopt a powerful stance against the enemy overseas. The Kenyan elections, to some extent, turned – by accident or by virtue of clever political maneuvering – into a referendum on the ICC and in turn the West “meddling” in Kenyan affairs.” BBC report.

The sentiments of the ICC lawyer mentioned at the onset would provide a lifeline to Uhuru’s administration which is currently struggling with public support. The tricks used in the last elections that galvanized their support base could easily be reactivated. If the campaign speeches of the last few days are anything to go by then the wheels might already be rolling.

“What we are hearing is that as we are negotiating for projects like the standard gauge railway, they (Opposition) are negotiating to have ICC cases revived if they take power.” Uhuru Kenyatta (while campaigning in Deputy President William Ruto’s Rift Valley backyard earlier this week).

The opposition is definitely already under attack due to their perceived friendliness to the West. How they react to this will be the deference between an early win for the current government or putting up a formidable show. It is still not clear whether the reports correctly quoted Mr. Antone, but however attractive the topic is the opposition are better off steering clear of it and focusing on the failures of Kenyatta’s administration.

Allowing the current government to turn this into another “referendum on the ICC” would be calling an early win for Kenyatta.