Home » Democracy » Drums of war and how the ICC failed Kenya

Drums of war and how the ICC failed Kenya 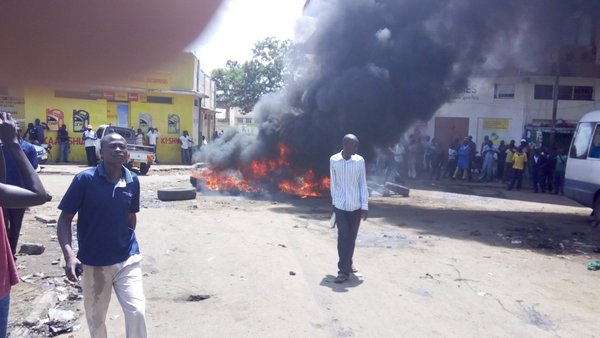 It’s 8 o’clock on Monday morning when I start putting this piece together. A little happier than I have been about Mondays in the recent past – happy because today there will be no street protests in my city, Kisumu.

Mondays have been marked with street protests called by Kenya’s opposition coalition CORD over electoral reforms ahead of the 2017 presidential elections. Though the protests were meant to be peaceful, they have resulted in the death of five people, several injuries caused by bullet wounds, loss of billions of shillings due to closed businesses during the protests and destruction of property.

It does not end there.

The street protests being championed by the opposition coalition have renewed the deep rooted ethnic animosity between some of Kenya’s largest tribes. In the run up to the stolen 2007 presidential election, political animosity pitted the Kikuyu (who mainly supported President Kibaki’s PNU at that time) against the Luo and Kalenjin (who supported ODM leader Raila Odinga). Today the Kikuyu and Kalenjin are together in the ruling Jubilee Coalition while the Luo and several other tribes make up the CORD coalition under the leadership of Mr. Odinga.

The rivalry between the Luo and Kikuyu is something that has been exploited by politicians for their own political gain and it dates back to the immediate post-election period when Kenya’s founding President Jommo Kenyatta (father to Kenya’s current President) allegedly betrayed a pre-independence MoU with Jaramogi Oginga Odinga (father to CORD’s Mr. Odinga). The rivalry would become amplified when Kenyatta fired Jaramogi as his Vice President in 1966.

This political rivalry was revived in 2005 after a short stint in which the two communities were in power together and successfully defeated former President Daniel arap Moi’s KANU candidate (Uhuru Kenyatta). The relationship between the Luo and Kikuyu would take a nose dive over another alleged betrayal of an pre-election MoU between former President Kibaki and Mr. Odinga.

When the election results were disputed, the ODM Party would immediately call for mass protests that quickly degenerated into full-blown ethnic conflicts that led to the death of more than 1,300 people and the displacement of about another half a million people.

Before it got that bad, there were the reckless political statements that incited communities against each other. There was the planning. The mass action called by the opposition (whose victory was stolen) provided a conducive environment to execute.

After a supposed resolution of the conflict following international interventions under the leadership of Koffi Anan, cases against those thought to be most culpable began at the ICC. One by one the cases were dismissed until no one is currently facing charges.

This has been interpreted back in Kenya as :”people can get away with these crimes.”

Fast forward to today, the war drums similar to those that were beating in 2007 have started beating again. Last night I watched two videos that were sent to me via social media. In one of the videos a Kikuyu politician is heard proposing the shooting dead of opposition leader Raila Odinga and adding that, “the Luo will throw stones for a week and then move on.”

That statement has sparked angry responses, most coming from the Luo community who are also demanding action against the said politician. One of the reactions I read goes:

“I put it to you MK and those who share your caustic tongue that if Raila is ASSASSINATED, Luos will not DEMONSTRATE. They will FIGHT! An all out war of HONOUR!”

Another politician at the same function called for the mass circumcision of Luos (Luos, unlike the Kikuyu, do not circumcise their men). What should worry anybody about that statement is the fact that forced circumcision was one of the ways in which Luos who were living in predominantly Kikuyu regions were tortured during the 2007/2008 post election violence.

My examples might have revolved around statements from Kikuyu politicians because that is what triggered this post but for the sake of being fair it is worth noting that even the tribes on the opposing camps have made extremely dangerous statements as well.

What is sickening isn’t Moses Kuria saying “kill Raira “, but the number of seemingly educated Kikuyus cheering him on #StopUhurusWarDogs

You see, politicians can only get away with this because their supporters allow them to. They cheer them on because deep down that is what our society is.

These statements are coming as the CORD coalition intensifies it’s push for electoral reforms through mass protests and just months before the 2017 general elections. Kenya is at cross-roads and even though the situation is calm today, the volatility can be felt in the air.

After 2007/8 we said “never again” but it looks like we forgot too fast. Maybe because we never really saw someone pay dearly for their actions – on that we blame the ICC.