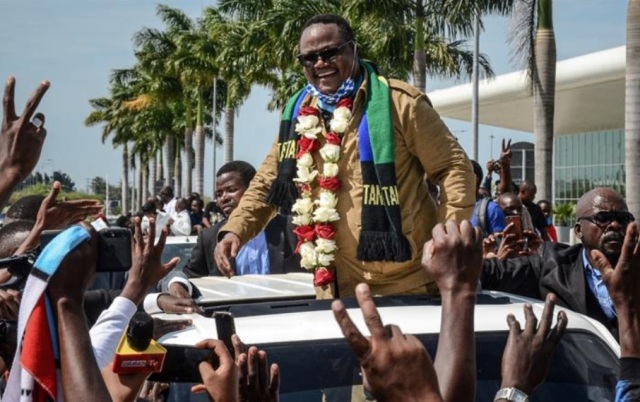 Tanzania’s main opposition party Chama cha Demokrasia na Maendeleo (Chadema) has vowed to reject the outcome of Wednesday’s general election over claims of fraud. Speaking to the press from Dar es Salaam on Thursday, Chadema presidential candidate Tundu Lissu said their agents were not allowed to observe the voting process in various parts of the country.

Our agents in various parts of Dar es Salaam were ejected from the polling stations and only allowed back during the counting excercise. This is an upfront on the rights of Tanzanians. Take action.

Tanzania’s constitution does not allow for the results of a presidential election to be challenged in a court of law. Lissu is also calling on the intervention of the international community.

The international community and the UN have the ability to take action on the demand for justice by Tanzanians. Let them help us punish those who messed this elections by not allowing them to travel abroad, do business or enter into agreements on behalf of Tanzanians.

Tanzania’s electoral commission is yet to declare the winner of Wednesday’s vote. The commission has up to one week to declare a winner who should be sworn in within seven days after the declaration.

The ruling Chama Cha Mapinduzi (CCM) presidential candidate John Pombe Magufuli has been president since 2015. His first term has been marred with claims of repression of dissenting voices, stifling of the press and freedom of expression and harassment of opposition politicians.

Lissu returned to Tanzania in late July after spending three years in exile in Europe following a failed assassination attempt in which he was shot 16 times. He has previously served as the chairman of Tanzania’s bar association (Tanganyika Law Society) during which he was a harsh critic of former President Benjamin Mukapa, also of CCM.  He entered politics in 2010 by winning the Member of Parliament seat for Singida East constituency.

Separately in the semi-autonomous Indian Ocean archipelago of Zanzibar, the ruling CCM candidate Dr Hussein Mwinyi has been declared the winner of the presidential poll garnering 76.27% of the vote against his main challenger Maalim Seif Ahmad of ACT Wazalendo who garnered 19.87% according to Zanzibar Electoral Commission.

Seif Ahmad was yesterday arrested for a second time this week after he called for demonstrations to reject the outcome of the elections. On Tuesday he was arrested at a polling station in Garagara before being detained at the police headquarters in Zanzibar.

The US ambassador to Tanzania has called for the immediate release of Ahmad and other opposition politicians arrested during these elections.

Detaining opposition leaders is not the act of a government confident in its electoral victory. Maalim Seif and his colleagues should be released immediately https://t.co/O2a1inQfC1