Enough is Enough – Ugandan Women March in Protest Against killings 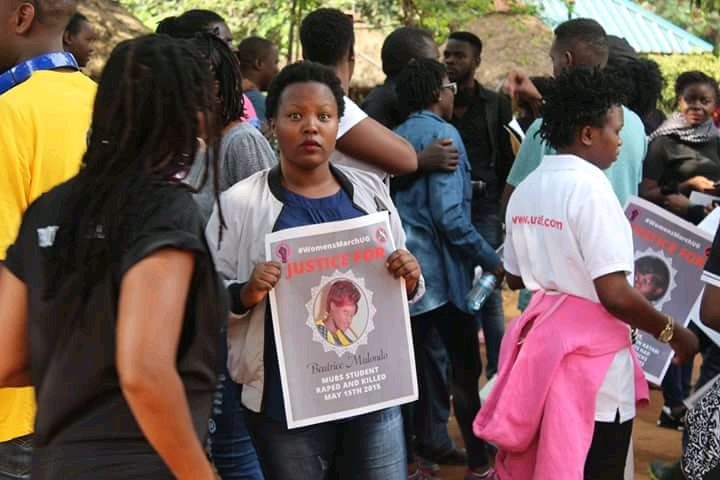 I had the opportunity to interview a couple of ladies for jobs a few weeks ago. We asked few standard questions. How old are you, are you married, what do you know about this industry etc. We also asked where they lived and if they would be able to handle the commute to and from work especially since these particular jobs meant that one would have to work ‘after office hours’. One of the interviewees said all was okay. But she also highlighted something that got me to think. “I am okay working odd hours apart from the new insecurity issues.”

She was aware that times have changed. That Kampala is not as safe as it used to be. And that to her was a matter of concern. It was in so many ways going to affect her employment.

I cannot say how many times I have had my father message me and ask where I am as soon as it turns 9:00pm. So for the last couple of months, I have not had a night life. I have to be home by 8:00pm.

A cousin was hit by iron bar by men just as she was getting to her gate at home.  It was about midnight.  That message was sent to all of us family members – laced with fear.  For our sanity – come back home early,  yours sincerely  – Parents. Such is the fear that has Ugandans especially women have to live with.

There have been arrests made but no comprehensive answers as to how and why these women are being killed.

30 June 2018 made history.  Women in Uganda chose to march and say – enough is enough. It was great to see women come together from all walks of life and voice their concerns, their anger towards the disrespect of women that has left many feeling unsafe, uncared for, and unheard.

Placards of the 43 women with their faces and names were carried to give honor to them.

Women matching on the streets of #kampala in protest of the rampant women murders and kidnaps #WomensMarchUG @observerug pic.twitter.com/7OUalALpgJ

It’s important to note that many attempts by women organised by Civil Society or otherwise to protest have always been foiled by the Uganda Police. Even this was about to be labelled illegal until the Minister of Internal affairs Hon Jeje Odong stepped in. He wrote to the Head of Uganda Police asking him to reverse the decision made stopping the protest from happening. Permission to hold the match was granted only a day before the march.

Excited to announce that Police has finally come on board to support our our NON- VIOLENT & NON- PARTISAN #WomenMarchUG tomorrow. A special thank you to @AKasingye for all your help. We start marching at 10:00 am from outside Centenary Park. pic.twitter.com/OmRyBO1PEG

French and American ambassador to Uganda among those who have turned up for the #WomenMarchUG protest. pic.twitter.com/0VP0PLxIWV

It was very emotional as women shared reasons as to why they chose to march. A friend Anne Fleischmann who is German but lives and works in Uganda wrote this on Twitter :

I am going to march today for the girl in my partner’s family who got kidnapped and doesn’t talk about what happened to her. For my friend’s sister who got dragged into a moving car. For every Ugandan woman who feels unsafe walking home at night. See you there! #WomenMarchUG

This goes to show that many have been affected regardless of whether they are Ugandan or not.

There were groups of women work over that marched in solidarity with the main event in Uganda.  Cyprus, Berlin, South Sudan and Spain are some of the countries that had women representing. Talk about unity in mission.

The men were also there to offer support in full swing. A number marched with placards that had profound messages too

I march because
["TEXT ME WHEN YOU GET HOME"]
means more now, than it did yesterday.#WomensLivesMatterUG#WomensMarchUG pic.twitter.com/GSOfHeFtdP

Making history was just the beginning.  And I am sure the government  saw that, yes it’s possible to have peaceful protests.  Power to all women in Uganda that made it a point to make their voices heard.  And more so to Twitter Feminists  that showed it’s possible to have a movement online and offline.