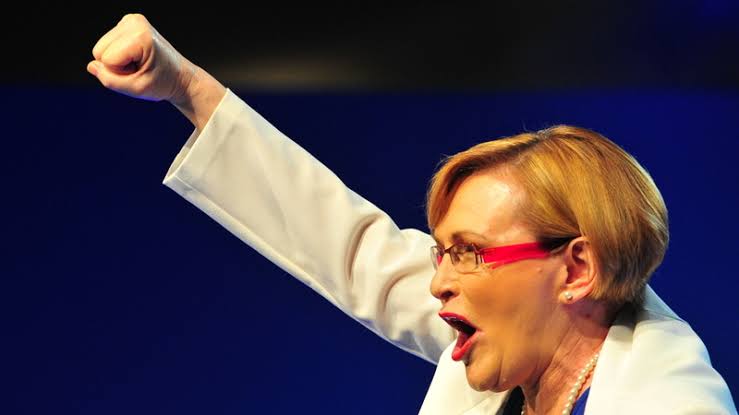 The short version of this response to some of her claims might read something like “sure, identity politics might compromise freedom in some of its extreme manifestations, but never as reliably as racism, sexism, and other forms of discrimination do”.

The longer version begins with the observation that – as seems common on the political right these days – Zille is using “identity politics” in the broadest and most uncharitable way possible, so as to make it easier to use the phrase as a punching bag.

And it’s of course in response to having been treated as a punching bag – in various systemic ways – that large numbers of people have chosen to identify as being X, in order to stand in solidarity against some form of oppression enacted by people who identify as being Y, members of an opposite (or just different) camp, or even no camp at all.

Yes, these categories can be crude. They can even be entirely spurious, and be used to generate equally spurious claims about the motivations and manner of the discrimination in question.

But there’s scope for an enormous range of cases between the caricature of the “sensitive snowflake”, who feels oppressed by the existence of white men, and the person who regards themselves as part of a group that has on aggregate been subjected to discrimination, and whose political analysis includes recognition of that fact.

Zille treats the caricature as being representative of all cases, doing no justice to whatever merits the underlying motivations might have. Yes, there have been some excesses of exuberance by college students of late, in which identity politics have led to some lazy or laughable arguments. Examples of that include the “sombrero incident” at Bowdoin College, and the case of General Tso’s chicken at Oberlin.

Despite such ideological excesses, and contrary to what Premier Zille asserts, identity politics can also refer to a set of entirely reasonable ideas, and these get thrown out alongside the silliness in Zille’s broadside.

Feminism, for example, is a form of identity politics, as is anti-racism, and neither of these “originated on American campuses”. Zille is echoing the talking points of folk like Jonathan Haidt, Mark Lilla and Jordan Peterson in her reductive analysis, but the idea of an increasingly intolerant student body is not borne out by the data.

Zille also uses the recent case of Serena Williams being punished for on-court infractions in the US Open final as an example of toxic identity politics, but her analysis is unfortunately devoid of any charity, nuance or awareness of the fact that instances like these aren’t necessarily open to a binary analysis of the form that “either Williams was being subjected to racism and sexism, or Williams was being a petulant opportunist”.

As I remarked elsewhere, a bunch of things can be true at the same time (and this isn’t an exhaustive list; just what came to mind while watching the footage):

To summarise the lengthier analysis I offered on Facebook, whether or not Williams’ behaviour in the final is a good example of the issue raised in #10 or not is beside the point of whether #10 is true or not.

A powerful and rich black woman is not immune to discrimination, even though she’s obviously going to be more insulatedfrom it than the average resident of South Africa’s informal settlements will be, yet Zille treats it as axiomatic that Williams’ behaviour was “inexcusable and unsportsmanlike”, without scope for anynuance regarding a life and experiences that Zille (and I) can mostly only guess at.

Likewise, unless you’re a tennis fan with an awareness of the umpire’s history – which few of us were until the statistical analyses of his rulings emerged in the days after the incident – you’d have no idea whether he has a track record of disproportionate pedantry with regard to male/female/black/white players.

Making snap judgments on the basis of (potentially) isolated incidents, when you’re fully aware of a context in which sexism and racism are a real problem, is always unwise. Extrapolating from the behaviour of some excitable 19 year-olds at various universities to a broad societal crisis is similarly so.

I have not read Professors Botha and Slade’s document that Zille is ostensibly responding to in this column. However, I don’t doubt that I’d find plenty in there to disagree with, seeing as I’ve read many similar documents emanating from the University of Cape Town in recent years.

Furthermore, I share Zille’s frustration when seeing how labels can be used to silence debate and stifle disagreement, and have written columns expressing these ideas myself, sometimes resulting in a similar sort of backlash to what she describes in her column, where an outraged cohort on Twitter rallies to tell you what a bad person you are.

But that behaviour, the intolerance of dissent that it sometimes manifests, and the simplistic analysis of your arguments that it sometimes derives from, is no good reason to treat the opposing point of view just as dismissively as they do.

Towards the end of her piece, Zille says

But, now and again, young people are gripped by ideologies that reverse progress and close down freedoms. It is important to be able to identify these tendencies early, especially when they involve the latest iteration of race fanaticism that seeks to turn minorities into scapegoats for broader societal and governmental failings.

Growing up in 1970s South Africa, the ideology most people seemed to be “gripped by” entailed the obvious superiority of white people, and of men, and was an ideology expressed in both spoken and unspoken ways. It didn’t necessarily have a name like “identity politics”, but it certainly shaped our experiences, whether we were black or white, male or female, Indian or Israeli.

It was mistaken, and continues to be – even though it’s fortunately less effectual than it was then. The current political and social trend is a corrective to that. While modern identity politics is arguably prone to false positives in seeing discrimination where there is none, or making lazy claims to authenticity without actual merit, that doesn’t excuse the need to acknowledge a specific context.

So in conclusion, while I’ve got no objection to “analysing the real barriers to progress, especially of marginalised groups, and to allow the empirical evidence to take them wherever it leads” – and in fact think it’s crucial to do so – our alternatives are not either that or “slavishly following America’s latest lunacies in the name of ‘decolonisation’”.

It’s not a “lunacy” to believe that there can be commonalities between oppressed peoples, and believing that there are things in common does not require you to think that all X’s are alike in every respect, nor that there are some (or many) X’s who are entirely different.

Cherry-picking examples to “prove” that identity politics is either entirely benign or utterly toxic are expressions of the same problem; namely a desire to support a conclusion, regardless of the evidence.

And, neither of these approaches is going to further any constructive debate. If you’re on Twitter, you can see for yourself: the majority of the replies tell us that either Zille is racist, or that she has exposed “Apartheid 2.0”.

So, well done on strengthening both factions, Premier Zille. If it was provoking careful thought and debate you were after, though, I’m afraid that project didn’t go as well.