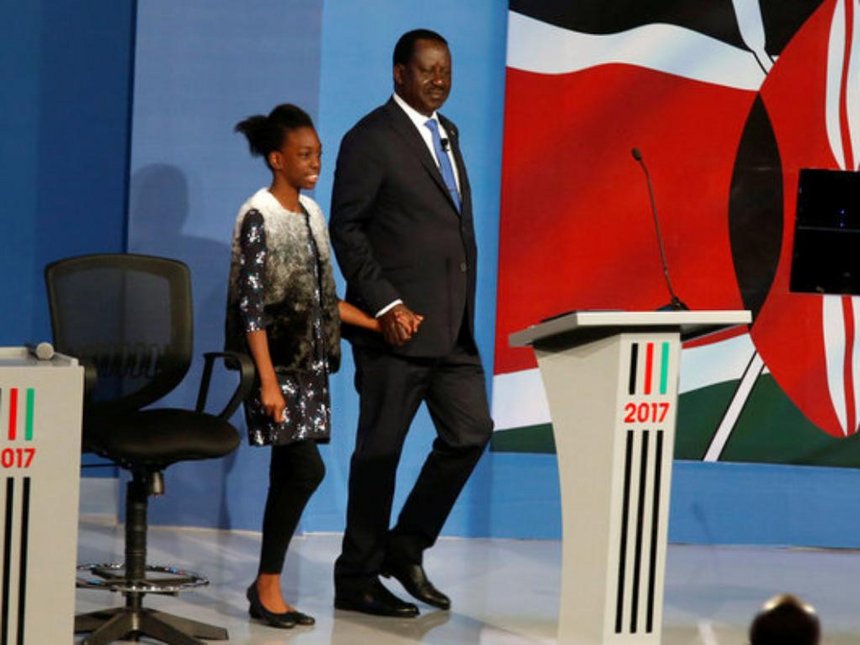 Kenyans go to the polls in 14 days and last night Kenyans had the opportunity to interrogate the 8 men who want to lead the country as President and Commander In Chief of the Armed Forces.

Only four of the candidates showed up for the two part debate that was scheduled to allow the less popular candidates debate on their own in the first segment while the two front runners who both score more than 40% in the most recent opinion polls debate in the last segment.

President Uhuru Kenyatta and three other candidates absconded the debate, perhaps out of fear of the amount of scrutiny they would have been opening themselves up to.

The candidates were grilled on various issues including corruption, economic growth, job creation, women inclusion and security among other topics.

One of the most interesting topics for the African audience in my opinion, during the debate was a question put to the main opposition candidate Raila Odinga regarding Kenya’s relationship with her neighbors. The opposition chief blamed Kenyatta’s administration for Kenya’s diminishing influence in the region citing Uganda and Rwanda’s decision to go for a joint oil pipeline project with Tanzania abandoning an earlier pact with Kenya.

Mr. Odinga also faulted the Kenyan troops’ continued stay in Somalia arguing that the soldiers need to be gradually redeployed from the AMISOM mission in Somalia to protect the country from infiltration by Al-Shabaab terrorists from within.

Mr. Odinga’s NASA alliance has put forward what is seen as a populist proposal to introduce ceilings on the amount of rent tenants pay. This proposal has created a rift between property owners and ordinary Kenyans who are mainly tenants with many arguing that the move is meant to punish those who work hard to invest in the country.

Put on his defense, Mr. Odinga explained that their proposal sought to bring into operation a rent restrictions law which he claims had been ignored by previous governments giving landlords a free hand to raise rents arbitrarily.

We are going to enforce the Rent Restriction Act to protect the poor, to ensure they are not exploited.

Perhaps another interesting element of the debate was how different the questions asked in the two segments were. The first three candidates who went through the first segment of the debate collectively just managed one percent of votes in an opinion poll conducted by two opinion polling firms. The sort of questions asked to them others have argued sounded like “high school debate questions” while Mr. Odinga was put to task on issues that sounded more presidential in nature. In my opinion however, the three candidates widely considered as underdogs did a better job tackling Kenya’s pressing issues with very specific proposals on how to solve these issues.

Dr. Ekuru Aukot, Prof. Michael Wainaina and Dr. Japheth Kaluyu might have dug into their experience in the academia – all being being distinguished teachers to clinically respond to the issues raised.

One of the biggest problems that Kenya is currently dealing with is negative ethnicity that in most cases does not only result in skewed allocation of resources and public appointments but has also threatened to break the nation right in the middle with the most recent case being the 2007/8 Post-election violence.

Put to the candidates, Raila Odinga who is a front runner in the polls did not put forward any tangible proposal towards curbing this vice neither did he give convincing explanation to instances of skewed employment during his tenure as Prime Minister in the Grand Coalition Government.

Raila Odinga: We are going to expand the government structure in this country and adhere to ethnic inclusivity #DebatesKE pic.twitter.com/LQitEo7tXh

While Raila Odinga and Uhuru Kenyatta benefit from support from their ethnic communities and their alignments, the other six candidates though not as popular from recent polls might claim to be the only candidates running on issues and providing solutions to Kenya’s ethnicity problems.

The same question was put to the other three candidates in the earlier segment of the debate. Prof. Wainaina squarely put the solution to the problem as doing away with the current crop of politicians who thrive on ethnic alliances.

The only people who can end tribalism in Kenya are the voters. On August 8th, vote out the tribal kingpins in NASA and Jubilee., if you don’t vote them out we are stuck with Jubilee. Then we can invest in and inspire a new generation of young leaders who will modernize this country.

Aukot: What Kenya needs is a no-nonsense leader; we have had a leadership that has tolerated bad manners like tribalism #DebatesKe pic.twitter.com/BGt2x95z4q

Women and youth empowerment issues also came up during the debate. Kenyans have been grappling with fulfilling the promise of the new constitution which requires that no one gender should occupy more than two thirds of public positions. In the last four years of President Kenyatta’s administration, parliament has been unable to pass legislation that would operationalize that segment of the constitution.

Raila Odinga: As Nasa we were committed to ensure the 2/3rds law passed but Jubilee denied us, vote in more Nasa MPs #DebatesKEpic.twitter.com/V3gOCOlmv8

Regarding corruption Mr. Odinga was hard pressed to explain corruption allegations during his tenure as Prime Minister. Specifically the maize scandal of 2008 that led to the suspension of various senior officers in his office. He insisted on innocence in the scam. Leaked diplomatic cables from former US Ambassador  Michael Ranneberger however implicated Mr. Odinga’s family in the scam.

Dr. Kaluyu singled out the expensive nature of Kenyan politics as a major contributor to runaway corruption in the country. He asserted that the political class go to bed with unscrupulous business dealers who fund their campaigns in exchange of lucrative business deals when they take over power.

We need leaders who can come in without political baggage and who have never been part of the system and are not career politicians. With that I am able to eradicate corruption once and for all and I promise I will deal with this in under six months.

Dr. Aukot believes that Kenya’s problem with corruption lies in the fact that theft of public resources is not treated as theft. He calls for a repeal of anti-corruption laws to make them more punitive to those found culpable.

When someone steals a phone in Nairobi streets he is charged with robbery with violence which carries the death sentence. Our mother tongues do not have a name for corruption, they simply call it theft and we have to start treating it as such.

The surprise of the night though was Mr. Odinga’s defence for the Odinga and Kenyatta dynasties. Both Raila Odinga’s father and Uhuru Kenyatta’s father were the first political leaders of independent Kenya with Jommo Kenyatta as President and Oginga Odinga as his Vice President.

Asked whether the two families are holding Kenyans hostage with their rivalry, Mr. Odinga insisted that both himself and Mr. Kenyatta have earned their place in Kenyan politics through personal struggles and sacrifices, not through entitlement. He said that just like their fathers fought for liberation from colonial masters they have fought for the democratic space enjoyed by Kenyans today.

The debate which was the third since 2007 is a clear indication of Kenya’s growing democracy and the public’s appetite for issue based politics evidenced by the overwhelming interest they have shown on the process. Even though we still grapple with the politics of ethnic alignments, the wind of change is blowing and the thousands of tweets that today support alternative views will perhaps as soon as the next election cycle provide Kenyans with a president not weighed down with ethnic baggage.

It’s embarrassing that in the 21st Century Kenya we still have basics of food, water, shelter and education as campaign points. #DebatesKE

Kenyans should be glad we have a candidate like Dr. Ekuru Aukot,from Turkana. A learned man. We choose to ignore him though #DebatesKE

At the end of the night promises were made, the most impressive of them by people who stand a very slim chance of rising to occupy the statehouse in two weeks. To those who do though, whether they will live up to those promises if elected is an issue only time will tell.

Perhaps the most assuring promise to Kenyans made on Monday night was by Raila Odinga promising to accept the results of the elections if he loses fairly.