Why Kenya needs to start planning for an exit from Somalia 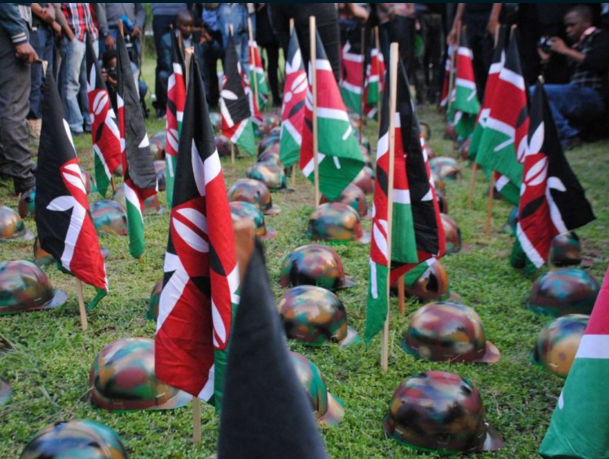 Slightly over a week ago, tens of Kenya Defense Forces (KDF) soldiers were butchered in a night attack on their base in El Adde, a small town in Southern Somalia. What followed were messages of solidarity with the fallen and injured KDF heroes. The outpouring messages of compassion came from all corners:

In Solidarity with families of the fallen, the injured, the yet to be accounted for #IStandWithKDF

The hashtag #IStandWithKDF became a rallying call for online patriotism. Very few dared to ask questions even as the government sought to control the flow of information. Those who asked tough questions or provided information on the nature of casualties were met with threats of prosecution and some citizens were arrested. Kenyan journalist, Yassin Juma, was arraigned in court to be charged for posting photos of KDF equipment captured by Al-Shabaab in the raid that left an unknown number of Kenyan soldiers dead, several others injured and an unknown number held hostage. He was charged with “misuse of communication gadgets.”

Threats or no threats, some brave people still sought for official information. Larry Madowo, a Kenyan TV journalist tweeted this:

#IStandWithKDF but I want to know how many of them we lost. I want the government to recognize them BY NAME. I’m against support by erasure

The question of “how many” is one that is being asked and will continue to be asked until we get answers – that is if we ever will. There is however one question that we are not asking but we really should.

When will our soldiers come home?

Five years have gone since our soldiers first set foot inside Somalia in an operation that was meant to be a “fast in fast out” kind of operation. It was aimed at protecting Kenya from Al-Shabaab who were then accused of abducting tourists inside Kenya and threatening the country’s biggest foreign exchange earner. The operation was aptly dubbed “Linda Nchi” – loosely translated to “protect the country”.

Working independently from Amisom troupes and under the direct command of the Kenyan military heads, the soldiers succeeded in driving Al-Shabaab from key towns and almost crippling their finances when they took Somalia’s port city of Kismayo. For a little while, there were celebrations and Kenyans believed that they had crushed their sworn enemy.

Did we protect the country?

Like my colleague Patrick Gathara points out in his article the objective of KDF operations in Somalia shifted when “Operation Linda Nchi” was disbanded and Kenyan troupes joined AMISOM whose main mandate is more beneficial to Somalia than Kenya and Kenyans.

Our country is not safer than it was before we crossed over to Somalia. From the sporadic abduction at the Kenyan Coast, we are now seeing increased terrorism activity in the country with regular attacks at places of worship, public transport, shopping malls and education institutions. The Westgate attacks in 2013 where 67 lives were lost and the recent classroom butchers that took place at Garissa University where 147 lives were lost is still fresh in the minds of the world.

Truth is despite our success in destabilising the Al-Qaeda linked terror network in Somalia, we have also taken considerable heat. We have lost an unknown number of soldiers to the war and a huge number of civilian casualties as well.

Is it time to pull out?

That is a critical question Kenyan policy makers need to start asking. The objectives of our initial incursion into Somalia might have long been overtaken by events as the force mutated into a Peace Keeping mission to ensure the transitional government and the Somalia National Defense take control of the war-ravaged nation.

The narrative that security operatives keep peddling that pulling out will mean that Kenya’s forces are conceding defeat does not hold any water now. It is evident that we need to protect our country from within our borders where we are increasingly coming under attack from home-grown terrorists.

A safer Somalia will mean a safer East African region, no doubt. Even if it is not in our direct interest, in the spirit of good neighborliness we must demand for a secure Somalia for her citizens. This though should not be a burden left to a few nations in the region.

This is an African Union mission and Africa is bigger than just Kenya, Uganda, Rwanda and Burundi. It’s time that the African Union re-looked at the composition of this force and replace the East Africans or long serving nations with troops from other parts of the continent.

This is a conversation that we must start having, it might not happen tomorrow but we need our soldiers back home to protect us from within or at least deployed to other missions.