Home » Democracy » Why Kenyans are keenly following the Uganda elections

Why Kenyans are keenly following the Uganda elections 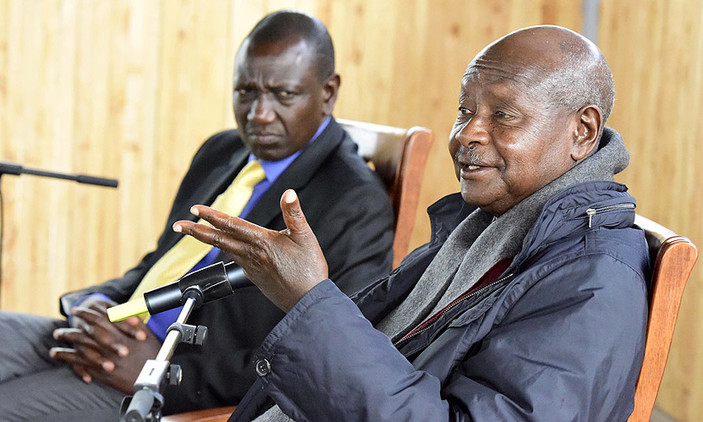 On Thursday Uganda will go to the polls to decide whether incumbent president Yoweri Kaguta Museveni, who has been in power for three decades, gets another five-year term or hands over power to the opposition.

No doubt that this is a defining moment for Uganda whichever way ‘the dice rolls.’

These elections are however not just significant for Ugandans; across the border,  in Kenya, people are closely following the developments. Kenyan media outlets have sent correspondents to Uganda who give live updates during news bulletins.

Kenyans are also regularly commenting about developments in Uganda on social media.

our African leaders are greedy for power and riches it should be high time for Museveni to call it off, #UGDebate16

Why is this election important to Kenyans?
Uganda has very strong ties to Kenya, and is a key partner in the East African Community. A lot of Kenyans work in Uganda, while Kenya was usually the first country Ugandans running from their country during the turbulent 1970’s and 1980’s went; today several Ugandans work in Kenya.

John Okello sells car spare parts at Kisumu’s industrial area, and regularly travels to Uganda to source second hand car parts. He explains why Kenyans care about the Ugandan election so much.

“Unlike Tanzania, Uganda has been very welcoming to Kenyans and a lot of us do business there or go there to get supplies. Look at Kisumu streets today, how many vehicles do you see bearing Ugandan registration?”

Esther Waliaula works with an NGO in Jinja providing bicycles to volunteer health workers and students in remote areas of Uganda to improve access to healthcare and basic education. She is from Western Kenya and is currently back in the country because of the uncertainties that could come with the hotly contested elections.

“I have only been in Uganda for a month and I hope that the elections will be peaceful so that we can soon go back to work. I however came back because I know how African elections sometimes go and you do not want to be caught up when violence erupts in a foreign country.”

Dr. Cyprine Oduogo an International Relations lecturer and dean at the School of Development and Strategic studies at Maseno University agrees that stable Uganda is very key for Kenyans’ economic interests.

“Uganda being a landlocked country relies a lot on Kenya for the movement of it’s goods and a lot of Kenyans do business in Uganda or with Ugandans. A stable Uganda is most definitely in the entire region’s best interest.”

The Connection between Kenyan and Ugandan politics
These elections are not only significant though to people who work in Uganda or travel there for business. There are domestic political reasons as well.

Kenya will be going to elections too in about a year from now. Kenya’s opposition politicians and their supporters have had very frosty relationships with Museveni’s regime. At the height of the violence that occurred in Kenya after the disputed 2007 elections, Museveni is alleged to have provided police officers that backed up the Kenyan forces in Kisumu and other opposition strongholds and helped Kibaki hold on to power. To many Kenyans he helped rob them of their victory.

“Museveni was party to our stolen victory in 2007. He was a close confidant of President Kibaki and now it’s time for him to go home too,” adds Dick Okech, a resident of Kisumu and supporter of opposition leader Raila Odinga.

Dr. Odugo thinks that Museveni has immersed himself into Kenya’s ethnic divisions and sections of Kenyans would welcome a politically neutral leader of their western neighbor.

“Kenyans would most definitely want to see a more neutral leader in Uganda who does not align themselves to the various tribal factions of Kenya.”

Even though President Kenyatta has remained silent on his stand regarding the elections across the border, his deputy who is a close ally openly campaigned for Museveni in Eastern Uganda where a huge population from his Kalenjin tribe reside. That was probably the biggest indication of President Kenyatta’s support for a Museveni win and more reason why Kenyan’s allied to the opposition are against a Museveni win.

While it’s impossible to ascertain whether Kenyans in support of Kenyatta’s administration also support a Museveni win, a lot of Kenyans think he has led the East African nation for too long and it’s now time to change guard. Museveni is attempting to hold on to power like his counterparts from Rwanda and Burundi, a move Kenyans on social media openly showed their displeasure with.

As far as over staying in power is concerned, your guess on where Kenyans stand is as good as mine.

The politics around the disputed Migingo island in Lake Victoria have also not helped the relationship between Museveni and opposition supporters who mostly hail from Western Kenya. In 2008, Museveni’s claim to the small island led residents of Kibera in Nairobi to uproot sections of the railway connecting the Kenyan coast to Uganda thereby disrupting delivery of goods to the landlocked nation.

“Museveni is widely seen to exhibit irresponsible leadership when it comes to his frequent claims to Kenyan territory. These are things that the average Kenyan does not take lightly even if the disputed land is just a small island,” says Dr. Oduogo.

To others though a win for opposition candidate Dr. Kiza Besigye is symbolic of things to come in the greater East Africa region including Kenya. In Tanzania President Jakaya Kikwete peacefully handed over power to John Pombe Magufuli (a close confidant of Raila Odinga) and an opposition win in Uganda would be a much needed morale boost in the Kenyan opposition rings.

Linda Okado ia a member of the ODM Women’s league and supports a Besigye win in the Thursday elections. To her an opposition win in Uganda  will be an affirmation that it’s possible to defeat an incumbent in Africa.

“The challenges the opposition is facing in Uganda is similar to ours. A win there would mean that it is possible for transition in free and fair elections.”