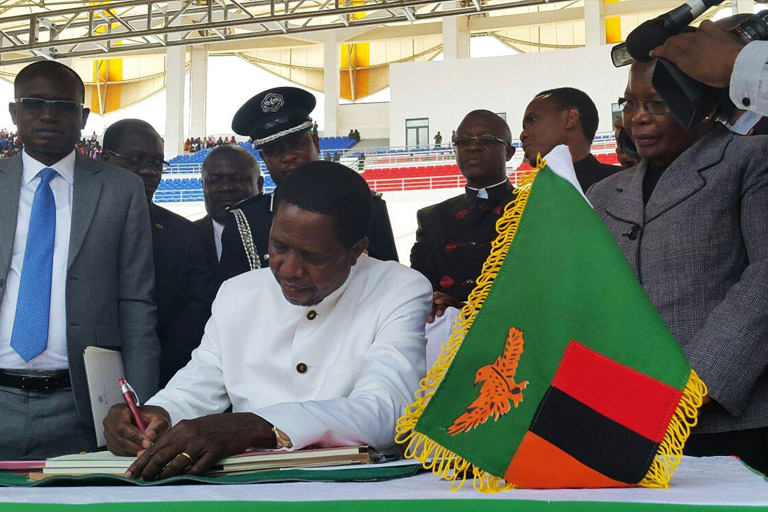 Zambia has adopted a new set of electoral laws that has set a new date for the forthcoming general elections and introduced what has been described as ‘progressive clauses.’

The country’s President, Edgar Lungu has assented to the Constitution of Zambia Amendment Bill of 2015. Since the 1990s, Zambians have been calling for this amendment as well to other amendments to colonial laws that date back to the colonial days.

Some of the laws Zambians have been seeking to be done away with include the first-past-the-post-takes-all electoral system and the appointment of a republican Vice President by the head of state.

Despite draft constitutions and reports being produced and circulated, successive governments have not been acting on the recommendations, rendering the whole constitution making process dead for years.

The signing ceremony took place at the Chinese made National Heroes Stadium in Lusaka, a site where the Zambian head of state was inaugurated as the country’s sixth President 12 months ago after winning a tightly contested poll following the demise of President Michael Sata.<

“There comes a time when people’s cries on an issue must come to an end……. As leaders, we have to listen to the voice of the people….. When I was being sworn in as President last year, I promise to give you a new constitution and here it is,” said President Lungu.

Lungu also reiterated his desire to have the rest of the draft constitution be passed through a referendum that he has tied to the next general elections slated for August this year.

When the bill was tabled before parliament at the end of 2015, the ruling Patriotic Front allied itself with the opposition MMD to gunner the much needed votes to pass the bill which was opposed by the opposition UPND, FDD and ADD.

And in his speech, President Lungu acknowledged the role the MMD parliamentarians played.

“The MMD gives me hope with its civic roles it played in the house,” he said as MMD President Nevers Mumba who was seated in the VIP section of the stadium nodded his head.

Among the electoral reforms the new law has brought is the 50 plus one majoritarian election of a president and the Vice President Running mate clause.

The new laws have set second Thursday of August every after five years as the election date.

This means that this year, Zambians will vote for their new President, Members of Parliament and Councillors on 11th August.

In the old constitution, Zambia’s Presidents had the power to set an election date which stakeholders had complained that it was being used to disadvantage the opposition.

Further, the law has also adopted dual citizenship, a concept that scores of Zambians have been crying for, especially those in the diaspora.

To the delight of many, the requirement for all presidential candidates to have both their parents being born in Zambia has been scrapped off.

This is a law that was passed in the 1990s which many say was targeted at Zambia’s founding father Dr. Kenneth Kaunda from participating in elections after he lost the 1991 democratic elections.

Despite this milestone for good governance campaigners, several civil society organisations and opposition political parties were opposed to the adoption of these progressive laws through parliament.

Operating under a loose consortium calling itself the Grand Coalition on The Enactment of a People Driven Constitution, non-governmental organisations even picketed parliament to block the bill last year.

On 23rd October 2014 when the final draft constitution was released, government announced it will adopt the contentious closes through Parliament and later subject the whole document to a national referendum.

But the Grand Coalition opposed the move opting for a referendum to adopt the whole document before the general elections. Even after the bill was passed by law makers, the Grand Coalition even called on President Lungu not to assent to it. With the enactment of these laws, the bigger job of enacting the whole constitution still lies ahead. 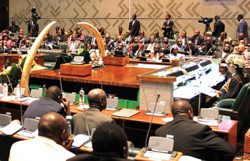 The Bill of Rights, whose review triggers a referendum, is yet to be put on the ballot and as promised by President Lungu, will be voted together with candidates for President, Members of Parliament and Councillors on 11th August.

In May 2015, Justice Minister Ngosa Simbyakula announced that government had appointed Commissioners of the Electoral Commission of Zambia (ECZ) as members of the Referendum Commission.

This means that the ECZ will conduct the 2016 General Elections simultaneously with the referendum on the constitution.

According to the Referendum Act, all Zambians in possession of the green National Registration Card are eligible to vote in the referendum which is usually conducted in a YES or NO fashion.