China, Zambia Relations on the March 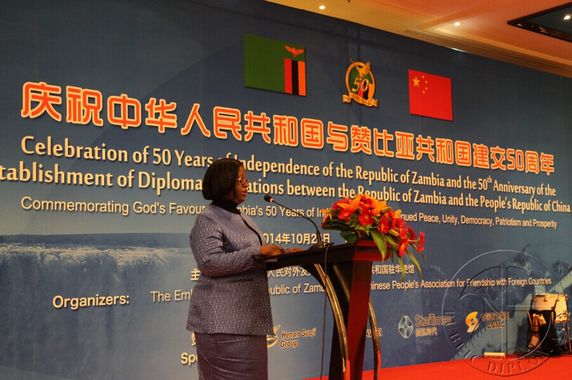 Zambia recently sent 10 Provincial Ministers on a study visit to China to learn how that country has pulled millions of its citizens out of poverty. In Zambia, Provincial Ministers, who are either elected or nominated Members of Parliament, are at the same level with Deputy Ministers but they do not attend Cabinet meetings.

Particularly, the ministers are to meet various dignitaries in view of  learning how the Chinese are boosting their country’s manufacturing sector. Chinese Assistant Commerce Minister, Bingnan Wang told the ministers that trade between the two countries increased by 18.4% between January and September 2015 pushing the amount of trade between the two countries to $US 2.1 billion

Zambian leader of delegation, Nathaniel Mubukwanu expressed appreciation to the Chinese government for having extended the invitation to the Zambian government to participate in the 2016 Ministerial workshop.

The leaders of delegation who is also Western Province Minister, informed the Chinese Minister that the increase in trade volumes in 2015 was as a result of Zambia ‘s business reform improvements. He expressed confidence that the workshop would accord his delegation a deeper appreciation of how China had accelerated her development over the last 30 years.

According to Zambia’s Ministry of Foreign Affairs Spokesperson, Dorcas Chileshe who is travelling with the Ministers, Mr Wang said 570 Chinese companies had invested in Zambia in agriculture, manufacturing, mining, ICT and other sectors.

Last week, Copperbelt Province Minister Bowman Lusambo shared on social media some of the lessons he and his fellow ministers are learning in China.

“I was elated to learn that Agriculture is a vital industry in China, employing well over 300 million farmers. The country is the number one producer of rice, wheat, potatoes, tomato, sorghum, peanuts, tea, millet, barley, cotton and oil seed including soyabeans,” said Mr Lusambo  on Facebook.

The ministers have since concluded their tour of Beijing and have moved to Shandong province on their continued tour of the Chinese countryside to meet more potential Chinese investors.

Zambia and China have been long standing partners since the southern African country’s independence in 1964. China built the TAZARA railway which links Zambia to the Tanzanian port of Dar Es Salaam which handles the country’s oil imports.

The Asian giant has also invested millions of dollars in infrastructure projects in sectors such as agriculture, roads, stadiums, schools, mines and health. Over the past 10 years, China has become a major player in Zambia with its ruling Communist party forging closer ties with each successive government.

This has included exchange visits by party functionaries to learn various political theories and policy issues in China. High level Chinese delegations, including the visit by that country’s Vice President in 2014, have been to Zambia to cement the two countries’ relations.

Zambia has also benefited from several concessional loans and currently, Chinese companies are building two modern international airports in the capital Lusaka and in the second city Ndola. Within Ndola, the Chinese built the 60,000 capacity Levy Mwanawasa stadium which they gave free of charge to the Zambian government a few years ago.

Meanwhile, the number of Chinese nationals living and working in Zambia has increased over the years. Last year, the Zambian Ministry of Home Affairs disclosed that there were 19, 845 Chinese citizens in the country.