Home » Economy » Economic Impacts Of COVID-19 Begin To Bite As 20,000 Miners Are Rendered Jobless In Zambia

Economic Impacts Of COVID-19 Begin To Bite As 20,000 Miners Are Rendered Jobless In Zambia 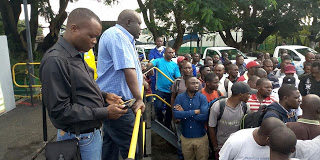 The Corona Virus pandemic has been used as an excuse by a major mining firm in Zambia, Mopani Copper Mines, to lay off 11,000 miners.

This means that a further 9,000 workers employed by subcontractors and suppliers, who are mainly South African and Peruvian firms, will also lose their jobs.

Zambia has in the past one month recorded 52 Corona Virus. So far, two patients have died, 30 recovered and 20 are still being treated by health personnel.

Mopani Copper Mines, which is jointly owned by global mining giants Glencore (73.1%) and First Quantum Minerals (16.9), has placed two of its mines in the copper-rich towns of Kitwe and Mufulira on care and maintenance, sending its workforce home.

“In addition to the impacts of a rapid decline in the copper price, Mopani’s situation has been further impacted by the critical disruptions to international mobility, transportation and supply chains arising from COVID 19,” said Mopani in a press statement issued on 7th April 2020.

The mining giant has also given its subcontractors a month to wind up the business.
The decision was communicated to the Zambian government which responded with anger, giving the miner a seven days ultimatum to rescind its decision or face revocation of its mining licence.

“Our workers, together with the union must not accept mediocrity from Mopani. And they have government support to stand on their right, on their mine, our God-given resource, that’s our position.” Said Musukwa in an interview with News Diggers, a Zambian online newspaper.

And on 8th April, there was a commotion as thousands of Mopani workers collected their letters after being sent away by officials.

Since then, the four workers unions in the mining sector have been holding daily protests to pressure Mopani to rescind its decision.

This is because previously, whenever a mine places its operations on care under maintenance, it means workers will automatically lose their jobs, irrespective of the assurances by the mining firm.

It is not known why the Australian native was leaving the country at the height of a crisis.

The minister told the media that it was surprising that Mr Bullock, who attended meetings over the crisis at the mine in the morning, would attempt to leave the country without informing authorities.

According to media reports, the mining executive was driven by road to Kitwe which is 300 kilometres away accompanied by armed Police officers.

Armed Police officers are now guarding Mr Bullocks’ house but the government has denied media reports that he has been placed under house arrest.

The Ministry of Mines has set up a Taskforce to investigate matters surrounding Mopani Copper Mines.

One of the people the Taskforce is supposed to interrogate is Bullock.

The Taskforce is expected to give recommendations on the way forward.

Mopani is a big stakeholder in Zambia.

It sponsors Nkana Football Club, a Kitwe-based premier league side which holds the record of winning 12 league trophies more than any other club in Zambia.

The firm also sponsors other clubs in various disciplines and its business supports thousands of Zambians in various mining towns.

Last year, the Zambian government took over Vedanta-owned Konkola Copper Mines (KCM) after it failed to pay its contractors and suppliers despite repeated appeals and pledges of investing more into its mines.

KCM, which is now being run by a liquidator, is said to have cleared all previously owned contractors and suppliers but its future is still being contested for in the courts of law.

The mining giant owns mines in Chingola, Chiliabombwe and Shibuyunji.

Zambia is Africa’s second-largest producer of copper after the Democratic Republic of Congo.

Most of its mines are run by foreign entities with the Zambian government retaining minority stakes through the ZCCM-IH conglomerate.

In the end, the Zambian government is likely to prevail in the Mopani case because it cannot risk 20,000 potential voters going home hungry, a few months before the crucial 2021 general elections.

The Copperbelt is a stronghold for the Edgar Lungu-led Patriotic Front government where it has 20 of the 22 Members of Parliament and any moves aimed at undermining its grip on the grassroots are always fought to avoid the opposition taking advantage.

Already, the PF leadership in the area has seen how politically sensitive this matter is and has been joining mine unions and residents in protesting the Mopani move at the mine offices daily.

For Mopani, which has so far invested millions of dollars in sinking new shafts and modernizing its operations, they stand to lose if the mining licence is grabbed and given to another firm.

Already, rumours are flying around alleging that some Chinese firms are lining up to take over the two mines.

With the deep resentment Zambians have over Chinese investment in Zambia especially over their low human rights record, it may be hard for the Chinese to sway public opinion if at all they succeed in taking over the facilities.