Pens of Pain: Reflections of African journalists living in exile 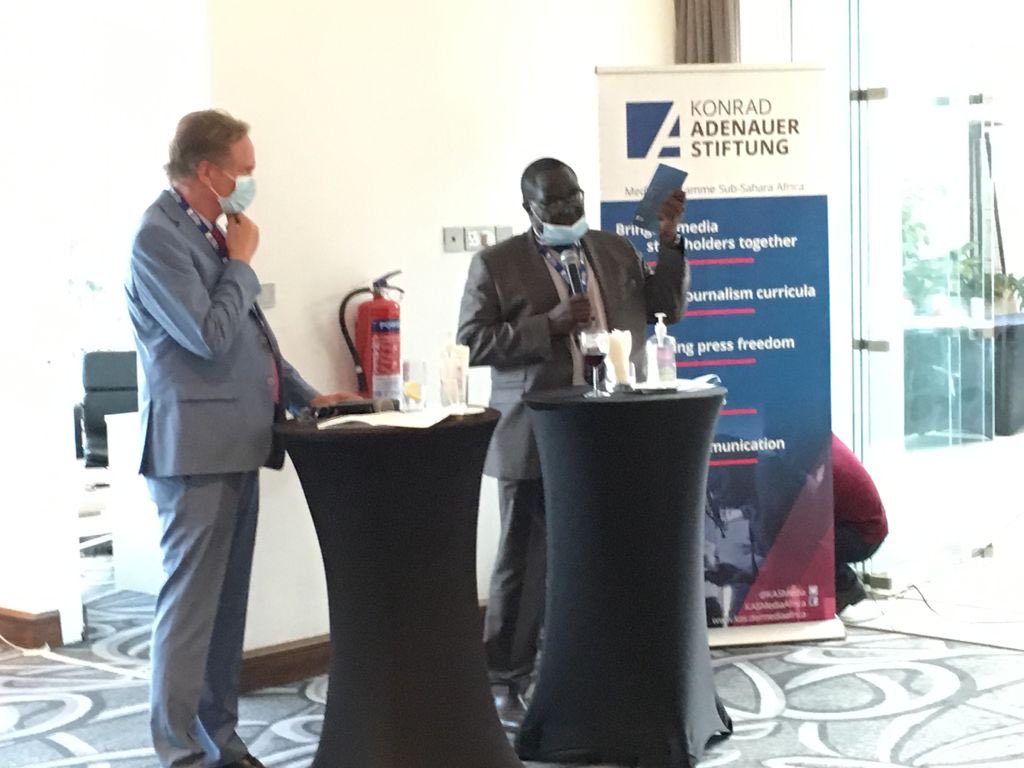 When the phrase “journalists in exile” is mentioned, many tend to think that it’s a thing of the past. Perhaps memories of popular journalists who worked in media houses in Eastern Europe, Asian and African countries under authoritarian regimes would come to mind.

Even today, journalists from all over the world are still forced to leave their families and loved ones behind to start new lives in countries far away from their homes, not for committing any crime other than publishing uncomfortable truths.

That is the story of Makaila N’Guebla of Chad, Keiso Mohloboli of Lesotho, Soleyana Shimeles Gebremichael of Ethiopia, Ansbert Ngurumo of Tanzania and twelve other journalists from Africa whose experiences leading to life in exile has been documented by KAS Media Africa in a 154-page book titled, “Hounded: African Journalists in Exile.” The book which was released about a week ago in Nairobi was edited by veteran Kenyan journalist Joseph Odindo, who once worked as the Editorial Director for two of Kenya’s main private media houses; Nation Media Group and Standard Group.

Christoph Plate the Director of KAS Media Africa says Nairobi was chosen for the launch of this book because of the role it played as a transit point for many journalists escaping repressive regimes in the continent.

While some experiences are from journalists who were forced out of their countries in the early 90s by the repressive regimes of the likes of Sani Abacha and Yoweri Museveni, narrations from others like N’Guebla are pretty too recent for us to continue imagining that exiles are a thing of the past.

When Idris Deby took over the reins in Chad after deposing Hissene Habre who had ruled the Central African country for 30 years, many Chadians were hopeful that they had finally come to the end of oppression. His first words said as much; “I bring you neither gold, nor money, but freedom.”

Deby would, later on, be known for quotes like, “A world without a press was like a body without a soul.” Statements that N’Guebla found it difficult to reconcile his stateless status with when he found himself being persecuted by Idriss Deby’s regime for exercising his freedom of expression.

His trouble with the government began when he was studying in Tunisia and a French-language pan-African weekly called ‘Jeune Afrique’ started republishing articles from his blog. The first article whose title could be translated to ‘Exclusion in Chad’ talked about corruption and favouritism in the award of government scholarship. Something he experienced first hand.

Because Chad could not setup enough tertiary institutions to accommodate students leaving high school, the government offered scholarships to students to study abroad with the aim of them returning to build their country. These scholarships were instead awarded to children of senior government officials or sold to the wealthy. This is what N’Guebla tackled in his article.

While in Tunisia as a student between 1998 and 2005, he continued writing for various publications exposing the ills of the government back home. The government not happy with his criticism colluded with the Tunisian administration to have him deported back to Chad.

Through the intervention of several humanitarian organizations, friends and sheer luck, N’Guebla would later find temporary asylum in Senegal where he continued with his journalistic work until the powers that be came calling again.

His experiences narrated in chapter four of this book provide a chilling recollection of his life in several foreign countries without travel documents. A considerable amount of that spent in dark, mosquito-infested, police cells where he often slept on the hard floor. Today he lives in Europe and was not even able to attend his mother’s funeral when she died in 2015.

‘Thou shall not critic’

Ethiopia’s Gebremichael of the Zone9 collective was lucky to have been at the airport in Nairobi when the authorities started arresting her colleagues in Addis. She was coming from a conference abroad and was at the airport waiting for her connecting flight back home. She did not get on that plane and that is how she escaped the torture that Befekadu, Zalem, Abel and three other members of the group went through at the Meakelawi prison for the next 16 months.

Their crime was criticizing Prime Minister Meles Zenawi’s suppression of democratic rights, media and freedom of expression in the country. In the absence of critical media, the hundreds of articles published by the ‘zone niners’ on the rule of law, constitutionalism, human rights and governance proved to be a welcome alternative.

Mohloboli of Lesotho Times still blames herself for the 2016 shooting and wounding of her editor. Events that were catalyzed by an exclusive story about a generous exit package that had been negotiated for the head of Lesotho’s Defense Force. The article apparently caused disquiet within the ranks of Lesotho’s military. The constant harassment by police, ransacking of their offices, threats from unknown people and the near-fatal shooting of her boss influenced her decision to flee to South Africa.

The late Tanzanian President John Pombe Magufuli who was nicknamed ‘the bulldozer’ was used to two things; getting his way and not getting criticized for it. Under his reign, Tanzania fell a whopping 53 places in Reporters Without Borders Press Freedom Index – no other country in the world had such a fall.

Several journalists were arrested and detained for trumped-up accusations. Others simply disappeared. Several others either had their licenses revoked or forced to pay heavy penalties. Media houses were not spared either. Ansbert Ngurumo who fled the country in October 2017, just a few days before there would be an assassination attempt on opposition politician Tundu Lissu believes that a hit squad was also sent to eliminate him. His “articles and commentaries had become a thorn on the side of President John Pombe Magufuli’s administration.’

These experiences and many more which you will read in the book that’s available for free download from the KAS Media Africa website vividly illustrate Christoph Plate’s argument in the foreword that “modernization and liberty are not necessarily companions.”