President Kenyatta is Slowly Driving Kenya into an Autocratic State 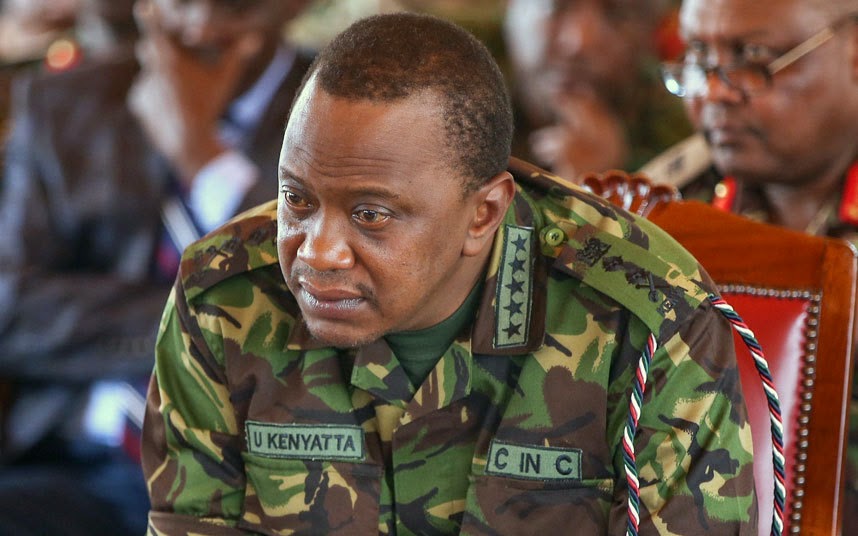 When Kenya passed a new constitution in August 2010, it was recognized the world over for taking a bold step in promoting basic human rights. The new constitution was commonly referred to as a “progressive constitution” by scholars and governance experts.

Basic rights and liberties of the Kenyan Citizens are entrenched in the Bill of Rights which cannot be altered unless by a referendum. The constitution was not a document the government bequeathed Kenyans with, it was a product of their blood. Thousands paid for it with their lives.

In fact the preamble of the Kenyan constitution reads in part:

“We, the people of Kenya— …..EXERCISING our sovereign and inalienable right to determine the form of governance of our country and having participated fully in the making of this Constitution; ADOPT, ENACT and give this Constitution to ourselves and to our future generations. “

This is the same constitution President Uhuru Kenyatta swore to protect and defend in his oath when he first took office in 2013 and when he was re-elected for a second time in October 2017 in an election boycotted by the main opposition challenger, Raila Odinga.

“….. That I will obey, preserve, protect and defend this Constitution of Kenya, as by law established, and all other laws of the Republic; and that I will protect and uphold the sovereignty, integrity and dignity of the people of Kenya, “ said Uhuru while taking his oath of allegiance of the president in both occasions.

Since his first election in 2013, President Kenyatta has consistently shown his disregard for the defending the same constitution he swore to “preserve and protect”.

In 2015, Kenyatta’s government sponsored the “Security Amendment Bill” that sought to among other things curtail the freedom of the press. High Court judges while making their ruling on the legality of the law which was passed in an acrimonious parliament session boycotted by opposition MPs found the section of the security law that called for more control on the media violates the constitution by limiting freedom of expression.

This was not the only attempt during Uhuru’s first term. Since 2013, bloggers and social media commentators were frequent guests of the state charged under section 28 of the Kenya Information and Communications Act 2013 with the offense of “misuse of a licensed telecommunication equipment.” 2015 saw seven people charged under this law. In January 2016 alone, 17 people were arrested charged with this offense before the courts declared this law inconsistent with provisions of the bill of rights in the Kenyan constitution.

2016 saw several members of the public killed while exercising their rights to picket as enshrined in the constitution. Most of these deaths occurred when police shot at demonstrators who were demanding the reconstitution of the electoral body in Kenya.

The unprecedented nullification of the August 8th elections by the Supreme Court of Kenya set the Presidency on a coalition path with the judiciary.

“We have reversed everything in this country by the decision of a few people. I don’t know how history will judge these gentlemen. The citizen has been told he does not have a voice … If that is not dictatorship, then I don’t know what to say,” said Mr Kenyatta reacting to the supreme court ruling.

In other forums, Mr Kenyatta referred to the judges as wakora (Swahili for crooks). The President of The Supreme Court did not take this lightly. Promising to revisit the issue.

“The Judiciary has not and will never seek to direct other arms of government on how to perform their functions. In the same vein, we will not allow anybody to dictate to us how to discharge our mandate as given by the people under the Constitution,”  said Justice David Maraga, President of The Supreme Court in Kenya.

Interestingly, it’s the same supreme court that upheld President Kenyatta’s October 26th re-election. A ruling they this time accepted and complied with, obviously because it was in their favor.

On January 30th, Kenyans were shocked to have four of the country’s most independent TV networks shut down for airing the mock swearing-in ceremony of opposition leader Riala Odinga. In their defense, the government claimed that the live transmission posed a security threat.

The TV stations remained off air despite several court orders issued to reinstate their transmission. The government only re-opned two of the stations; NTV and KTN News after intervention of foreign envoys. Citizen TV and Inoro TV who had also obtained court orders are still off with the government not giving reasons why they have continued to disregard lawful court orders.

Both the Judiciary and civil rights bodies are alarmed by this.

The Chief Justice on Wednesday warned that the government is setting a bad precedent by ignoring court orders.

“Compliance with court orders is not an option for any individual or institution. Neither is it a favour to be doled out to the Judiciary,” read a statement he sent out to the press.

President Kenyatta’s administration has continued to treat the law as a list of suggestions instead of looking at it as a binding document governing how citizens of this country relate with one another. The Law Society of Kenya President Isaac Okero aptly put’s it that this is not the government we can trust as the custodian the rule of law.

Mr. Okero spoke following the continued detention of opposition lawyer and activist Dr. Miguna Miguna despite the court ordering his release. The Inspector General of Police Joseph Boinet and the Director of Criminal Investigations George Kinoti also failed to produce Dr. Miguna as instructed by a High Court judge. They chose to charge him in a lower court and subsequently deported him to Canada when the said court also ordered that he first needs to be presented before High Court Judge Luka Kimaru who had initially ordered his release.

“Once again the state is willfully violating Mr. Miguna’s rights under article 49 by moving him without any notice to his lawyers or his family, and in order to frustrate their access to him, in a court station outside Nairobi and not where it has been ordered to be produced.”

When President Kenyatta said “we shall revisit” after the court nullified his first election in August, was he referring to the manner in which officers in his administration are currently disregarding lawful court orders?

When the government decides to clamp down on independent media and deny it’s citizens access to information, when a government decided to harass opposition politicians in contravention of direct court orders through illegal detention and withdrawal of their state issued security then we realize we are now operating under autocracy.

President Kenyatta has shown that his intention to drive this country down the road his father Jommo Kenyatta and his mentor Daniel T. Moi took it that left us divided and our public coffers looted.

This is a government that has continuously harassed journalists and threatened the independence of the media. Criticism is something President Kenyatta has not taken lightly.

Kenyans should be a worried lot, if they don’t take immediate action to stop President Kenyatta’s outright disregard for rule of law then the future looks very bleak when it comes to respect of human rights.