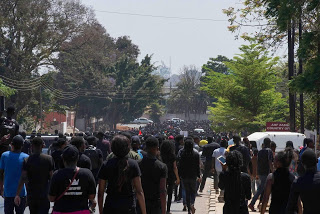 Dozens of South African businesses include banks, supermarkets and a television provider have been temporarily shut down in the Zambian capital Lusaka, as thousands of university students protest xenophobia taking place in South Africa.

The students, wearing black clothes in solidarity with victims of xenophobia attacks in South Africa, also disrupted lectures at the University of Zambia (UNZA) before marching along the Great East Road, a major boulevard in Lusaka and stormed the Manda Hill Shopping Mall were they smashed Souther African supermarket, Shoprite, the biggest supermarket in the country.

At Hungry Lion, the students walked away with umbrellas and also got away with trolleys from Pick N Pay which they rode on. In their thousands, the students entered Addis Ababa Drive and walked 15 kilometers to the South African High Commission under the watchful eye of heavily armed riot police officers.

At the High Commission, the UNZA students were joined by hundreds of students from Evelyn Hone College, a tertiary institution situated in the central business district of Lusaka. The High Commission premises were locked and heavily guarded by Police. This prevented the students from physically deliver their petition to South African diplomats.

In anger, the students to burn tyres and deface the sign post for the diplomatic mission. At some point, Police officers tried to stop the students from lighting the tyres which led to students unleashing missiles on the High Commission.

This led to a cat and mouse fight. The police used teargas canisters while the student pelted stones on the police. Lusaka Province Minister Bowman Lusambo arrived at the mission and arranged transport for the students to be ferried back to the Great East Road Campus where he later calmed them down.

Zambia National Students Association (ZANASU) President Misheck Kakonde said the petition which was not handed over was meant to give the South African government a two day ultimatum to stop the xenophobia.

“We are now fed up with the behavior of South Africans and we may respond with the same amount of force on your businesses and investment in our country Zambia … The South African government is proving to be docile in managing their thugs…,” reads part of the petition.

The petition has 11 demands and it claims that 39 Zambians in South Africa have so far been injured and some may have even lost their lives.

“If your government does not do anything within two days, your High Commission in Zambia shall be closed for eternity… No South African businessperson shall bring any products to Zambia… First National Bank (FNB) and other South African banks shall not be allowed to operate…”

Reaction to the students protest

The Zambian High Commission in Pretoria, South Africa clarified that only one Zambian by the name of Daniel Lupiya was caught up in the xenophobic attacks. Mr Lupiya was hacked in the head and was admitted at Gemiston hospital.

The High Commission says it was following up on another report of Mr Siachingi Sialubaya, a truck driver, who is also reported to have been attacked in KwaZulu Natal.

Zambian President, Edgar Lungu condemned the violence by the students but warned that xenophobia can affect African unity.

“Criminal gangs engaged in brutalizing innocent people must know that their actions may cause the isolation of South Africa from the rest of the civilized world. The South African government must bring the culprits to book before this xenophobia degenerates into full scale genocide,” said Lungu.

According to the Zambia Development Agency, South Africa is among Zambia’s top five trading partners. Zambia imports and exports a lot of goods from South Africa and most of South Africa’s road haulage exporting goods to Democratic Republic of Congo passes through Zambian borders.

The Football Association of Zambia cancelled a friendly match with South Africa due to the xenophobic attacks. The match was supposed to be played in Lusaka but thousands of Zambians took to social media to call for its cancellation. Two South African rugby teams JHB Bobbies and the Blue Bulls which were supposed to travel to Zambia for the Zambia 7s tournament have also cancelled their trip.

The Economics Association of Zambia also pulled out of the World Economic Forum that took place in Cape Town, South Africa. Across the continent, Nigerian singer and song writer Tiwa Savage and Ugandan comedian Teacher Mpamire have also cancelled their shows scheduled for South Africa.

In the capital Lusaka, one of the most popular private radio stations Hot FM has pulled off all South African music from its playlists. The radio’s statement reads:

”In light of the xenophobic attacks on foreign nationals in South Africa, Hot FM will cease to play music by South African artists on our airwaves until further notice. Africa is one and until such a time that our South African counterparts embrace ubuntu again, our stand will be with all our African brothers being attacked and terrorised in that country.”

The South African High Commission in Zambia is yet to respond to these developments in Zambia.