Zambia’s Self Declared Satanist Speaks Out Against Christianity 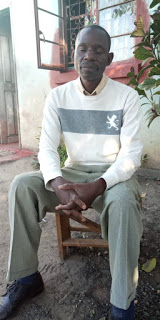 People have called him a mad man, a witch, all sorts of names but he calls himself a good man.

Renting a small house in Kitwe’s bustling Bulangililo neighbourhood is 46 year old Alex Mwamba Kazhimbala Chisulu, a controversial Satanist who has left a community divided over his religious views. The walls inside his house are decorated with Satanic symbols which he proudly explained during an interview.

He is actually a former Catholic Priest who controversially converted to a religion which most Zambians hold with fear and suspicion: Satanism.

For years, he has confused his neighbours, annoyed his landlord and created tension in the area were he lives.

Since he is an open Satanist, people around him have linked all their misfortunes to him.

“Even witchcraft, sicknesses and other misfortunes are blamed on me, but am a clean man, I have never touched or slapped anyone, am clean,” he said in an exclusive interview.

To understand why Chisulu is such a divisive figure, it is important to get back to the bottom of the matter and trace his history.

Chisulu was born in 1972 in the northern Zambian town of Solwezi, a mineral rich town which has been millions of investments by multi-national conglomerates in the recent past.

He is a highly educated man who earns his living by conducting tuitions to adults in his house. People who drive expensive cars come in the evening, park their vehicles and sit down to learn from a man who does not shy away from being identified as a follower of Satan. Inside his house is a black board and a box of chalk which he uses for his tuition sessions.

Chisulu says he entered the Saint Augustine Major Catholic Seminary in Kabwe to study for priesthood and spent three years there. “While at the seminary, I discovered that am a very critical person, I ask too many questions. Here I was studying Philosophy and it gave me room to question many things and understand man. I graduated with a Diploma”.

He boasts that even lecturers knew him as an inquisitive person who questioned everything. Between 1997 and 2002, Chisulu enrolled at Saint Dominic’s Major Seminary in Lusaka were he studied for his Bachelor in Theology, a course which he says was difficult because he was not allowed to question church doctrines.He says despite being critical about the course, he completed and graduated.

“I was later ordained as a Priest in Solwezi and sent to Manyinga, an area which was part of Kabompo District but is now a new district.

“In Manyinga I felt too much opposition because I ran a lot of businesses like chicken rearing, livestock and I was even building the first ever filling station in the area. The 2-3 years I spent there were difficult,” he added.

Chisulu alleges that one day his Bishop showed up at his house in a Land Cruiser and delivered a letter of transfer and gave him a few minutes to pack his belongs and leave for Solwezi.

He was then taken to Saint Kizito in Solwezi was he became an assistant to another Priest.

He said the move annoyed him and he immediately applied for leave of absence. That is how his priesthood ended.

Having left the ministry, Chisulu decided to relocate to the Copperbelt to start a new life.

“I first rented a house in Kwacha township before I moved to Bulangililo were am currently living. It is here where I met this woman who I married but it didn’t last, because of my religion (Satanism) she accused me of all sorts of things and left,” said Chisulu.

I then got a job at Brightway School where I started teaching to earn a living. He says on July 6, 2016, he experienced something strange which made him shake and felt weak.

“I used to meditate in the morning before class, but on this day I had a strange feeling. I felt a crack on my head, I felt a flashlight, my limbs were jerking and I couldn’t teach”. He says he left school and went home and to date, he still feels the jerks.

Chisulu says that experience was his awakening and transformation into a Satanist. He says he felt something like a snake which went through his spine and came out through the head and since then, his eyes are open and he now knows what is right and what is wrong.

“I practice a religion called Orionism. Satan is the Emperor of the Orion hence I discovered this religion to be Orionism,” he said.

Chisulu says he decided to become a Satanist after much research on the role of religion in life.

His Views On Christianity and Islam

After much research, Chisulu says the theology taught in Christianity and Islam is fake and it is full of violence.

He gives examples mostly from the Old Testament were God killed enemies of the children of Israel or his followers who sacrificed their children to God as examples of violence allegedly promoted by the Bible. “I got to learn that Christianity is fake, it’s a hoax, its wicked, very evil ait’ sits the same with Islam which promotes Jihad or Holy War which kills people. The only true religion I came to understand is Satanism. Satan means the truth according to an ancient Hindi script. ”

Chizuru goes on to talk about Genesis 2:17 were the Bible talks about the Garden of Eden and how God instructed Adam and Eve not to eat from the tree of knowledge.

He trashes the Biblical account saying there were lies in God’s instructions and the serpent (He calls it Satan) told them the truth).

“That whole scenario was fake. When I researched, I found out that there was no tree. That so-called tree is actually a man’s spine because it is the center of the body. Jehovah (He calls God as Jehovah) was scared of Adam knowing the truth that is how he lied to him. Most people in Christianity are lost, they were cheated.”

He claims that Christianity and Islam are just a program designed to destroy humanity and that Jesus is a fictitious character.

He wonders why Christians celebrate the death of Jesus instead of resurrection.

He describes it as glorifying violence instead of embracing life. “What is the purpose of a dead man on the cross to us? Christians are lost, they are cheated, they are confused,” he said. He goes on to cite many Bible verses were children of God killed their enemies and says the violence was promoted in the Bible.

Chisulu claims Christianity has been a threat to world peace and in Zambia since the declaration of the county as a Christian Nation in December 1991, divorces have shot up, deaths have skyrocketed, evil has increased.

He says the only religion which can cleanse the works is Satanism.

Chisulu acknowledges that Satan lost the battle to God but he claims he will have a come back soon.

“Satan is on his way back to victory because he is the truth. If I was given a chance on a Television program, I can help people think properly and convert them to Satanism, people are lost”.

He says Christians go to church and make noise and achieve nothing because they are misled.

When asked why he lives in poverty when it is believed that Satanists get a lot of money upon being initiated, Chisulu said Satanism is an awakening and not a business.

“If you join Satanism thinking you will make money then you are in the wrong place. When you are a Satanist, you gain a third eye and the sixth sense. You will be enlightened and be able to see things other people can’t see,” said Chisulu.

His Eviction Over Satanism

Last week, Chisulu was given notice by his landlord to vacate his rented house because his neighbors were not comfortable with his presence.

On Saturday as ZNBC reporter Wamundila Chilinda was interviewing him at his house, hundreds of Bulangililo residents gathered in no time. They started stoning his house, smashing the windows.

Things could have been worse but heavily armed officers from Riverside Police Station arrived on site within minutes and rescued him.

Hwasas whisked away to an unknown lodge were he has spent the last five nights. His belongings, a handful of chairs and clothes, are still stuck in his house as he is scared of being lynched by his neighbours. A good Samaritan has been paying for his room at a lodge and has even brought him clothes.  Despite all this, Chisulu still believes Satanism has the real truth and other religions are fake.

“My god Satan has brought me here so that people can come to know the truth,” he said.

He was recently spotted at a popular bar, sipping some cold ones while looking unworried. In a Christian nation like Zambia, it is not known how far Chisulu will go in practicing Satanism openly.

A number of prominent foreign preachers and South African artist Zodwa Wabantu were denied entry in the country due to what the Ministry of Religious Affairs and National Values calls “Unchristian” beliefs and acts.

By the way, Chisulu says he is now studying for his Master in Business Administration at Cavendish University and he is more normal than people accusing him to be mad.

“When you look at me, do I look mad? Tell me, am I mad?” said Chizulu as he smiled