Conversations from Berlin – A chat with Re:publica’s John Haeusler 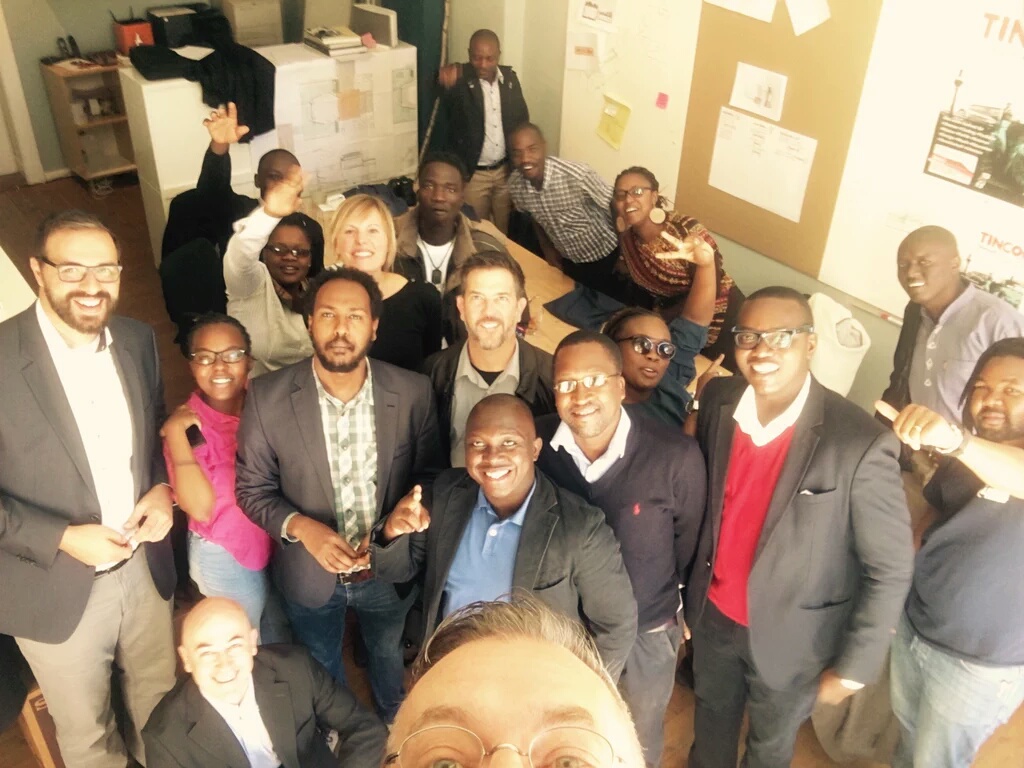 I love to learn – to read, explore and experience things anew, it is always a good treat for me. However, nothing beats listening and learning from someone that has been – and is still able to tell their story. Imagine how much Albert Einstein even when he is long gone is able to influence our lives. But imagine even more sitting at his feet and learning first hand from him. I would have loved that – just to pick his mind – even though I am no scientist.

And so I was thrilled to meet, talk to and listen to one of the people that has helped shape the digital communications world through the work that he does in Germany. John Haeusler is one of the founders of re:publica.

It took us about 30 minutes to commute from where we were staying to where John Haeusler works from. You could tell that he was excited to have us over – a team of 15 African Bloggers and Maker Space founders from mainly Sub- Saharan Africa. As soon as we walked into his humble abode – we all went for the water and gummy bears before we sat down for what turned out to be a very hearty conversation. John is very ordinary. That morning he was clad in a white tee and black sweater matched with black pants.

From just looking at him, you would not be able to tell the number of things that he has achieved. One of them being re:publica. He also runs a blog: Spreeblick that has become very well known for great content in Germany.  Aged 51, he considers himself ‘old school’. He talked to us about that and his newest project for teens, blogging and of course how re:publica started out.

John Haeusler on how re:public started?

Re:publica was the first place that I heard and learned about what happened in Africa through the Global Innovation Gathering and Geraldine that Africa had skipped the ‘wire’ part that we had here, you know internet on a wire. For me it seemed that most people in Africa just jumped into the mobile internet. There was no 10 years of fiddling around with a cable or so. And so that very interesting to learn and also that immediately there was innovative companies doing mobile business and all that. I found that very interesting as well.

… On Blogging and money

It was strange because I always thought that blogging should be a hobby, it should be something that you do for yourself that comes from the heart, and then you realize it’s a job because it takes time. I can write very fast but I cannot think very fast. When Spreeblick kinda picked up, the comments and the communication had to be done – I ended up spending all my days and nights on the blog and yet there was no money. We tried many things – we started our own BlogAd network in 2005 but that just didn’t work. A, because we started very early. When we started putting ads on our blogs people were saying: we are starting a new culture, they have no money and so there was a huge fight over advertisement on blogs. Then I also realized that I am not good at selling. I don’t like it.  I don’t even like to talk to agencies – it’s just boring.

When re:publica happened  it was never a business decision. Over the years, the blog was taken seriously when we started talking about what was happening and also as a selling brand of re:publica.

Your new project: TINCON, tell us about that

A year ago we decided to do something like re:publica for teenagers only because have a completely different internet than we use. It’s really interesting – when Facebook started all the parents were saying to the kids: “don’t put your pictures on Facebook, be very careful, everybody can see them and who knows who is doing what with your pictures” and so I think that they then drew away from Facebook into these completely closed communities.

They are on Whatsapp, they have got their school groups, they are on instagram, many of them have their private instagram accounts. They Snapchat a lot which is also not open to the public and that’s interesting because kids were listening to their parents and they said – okay I don’t do it in public anymore, I do it on Snapchat, Whatsapp, Instagram and that makes it really, really hard for us to get to the kids.  They are not that much on Twitter, they don’t use Facebook anymore – only on messenger.

Society is changing, you don’t see kids on the streets anymore because they are in school and schools are going on all day, we don’t see them in the clubs. You know when I was 14, I grew up in Berlin and I went to three concerts a week – I was music crazy. I just wanted to hear and see musicians. I was 14 and I was going out almost every single night. Now my sons are 14 and they can’t go out because they are not allowed to get in into clubs or the concerts. At 16 you can go out till 12 o’clock but after that you have to return home. Young people are beginning to fade away from society. You have to know what you want to do with your life when you are 15 – that means they get into the jobs pretty fast.

When we started re:publica, we didn’t think of it as a business model. We thought, it would be great to meet, just a nice thing to do and it worked. With TINCON, it is almost the same. We think that it would be okay to have a space like that. The speakers will be their peers – and we have grownups as well. Because some of the workshops are by grownups. We have some robots there and a lot more to learn from.

Aristotle said: “For the things we have to learn before we can do them, we learn by doing them’. We all left thinking – can we make re:publica kind of event happen for Sub – Saharan Africa or Africa as a whole?

Most definitely as long as we commit to learning as we do!